Hey there fellows and fellarinos, hope you're well, right then, so, I've been shooting photos in Acadia for 12 years now and sometimes I like to think that I know it like the back of my hand, along the coast at least, but I'm still able to find new places that I've never explored yet. This latest spot that I found is one that is particularly steep and rugged and I've been looking down from the road to it it for the last few months thinking that there must be a whole bunch of interesting features to photograph up close down there, but it's all cliff, cliff and more cliff and I'm not a rock climber and instead of considering breaking my legs and ankles trying to figure out a way down there, I would just drive on to the next accessible part of shore around the bend- but enough is enough with that game and last week on Thursday morning I had some extra time to go shooting early in the morning and my location (a.) didn't work out so as I was going to location (b.) I passed this spot again and finally found the way down. Here's what it looks like from the vantage point that got me interested in it-

The easiest way down was the way that the water goes- I just found a rain runoff spot and after some ducking under boughs and squeezing through some shrubberies: there was the path that all the other photographers use. Once you're down past the steep dangerous stuff and closer to the water's edge you can see where it is that you want to be going and how to get there- the terrain and geography here was completely interesting with deep cuts in the granite cliffs where the ocean would rush back thirty or forty feet to slam against the wall, and tunnels and splits and buttresses and all kinds of photo worthy stuff. And there was always a way around the bend to get across to the other side of the crazy cuts and ravines even if it wasn't obvious at first. You just had to commit to go around the bend to find them. After a while of snaking back and forth around these features I made sure to check to see that I wouldn't be cut off by the incoming tide, but my egress from there was all up so I was good to go. Right then- on with the photography!

So, this was my "process"-like. Once I got to a position that seemed the most balanced in foreground and middle distance and background- I first was responding to the sunrise and the cloud textures to the east. This whole side of the island faces east so when I shoot in the morning I'll start over here and then move across the island following the shadows throughout the morning. The scene was nice and dynamic and there was great contrasting textures in the sky and the waves in the cove in the foreground, but this image I had made time and time again before this now in other places. So this first scene was the "typical" picture. It's nice in color too- just even more "typical" to me, and the thing is- I recognize beauty all around me all the time, but the images that I want to make with my camera now are not the ones that I've made before. So, I started shooting here at @06:15 am and by the time I had realized the image that I wanted to take from here that would be new to me and exciting and challenging it was 07:14:31 am (by the exif data). And I call that pretty lucky at this time right now. It only took me an hour to find the composition that I wanted to capture. Worse would have been not finding the shot at all. here's the take that I like the most of the morning- 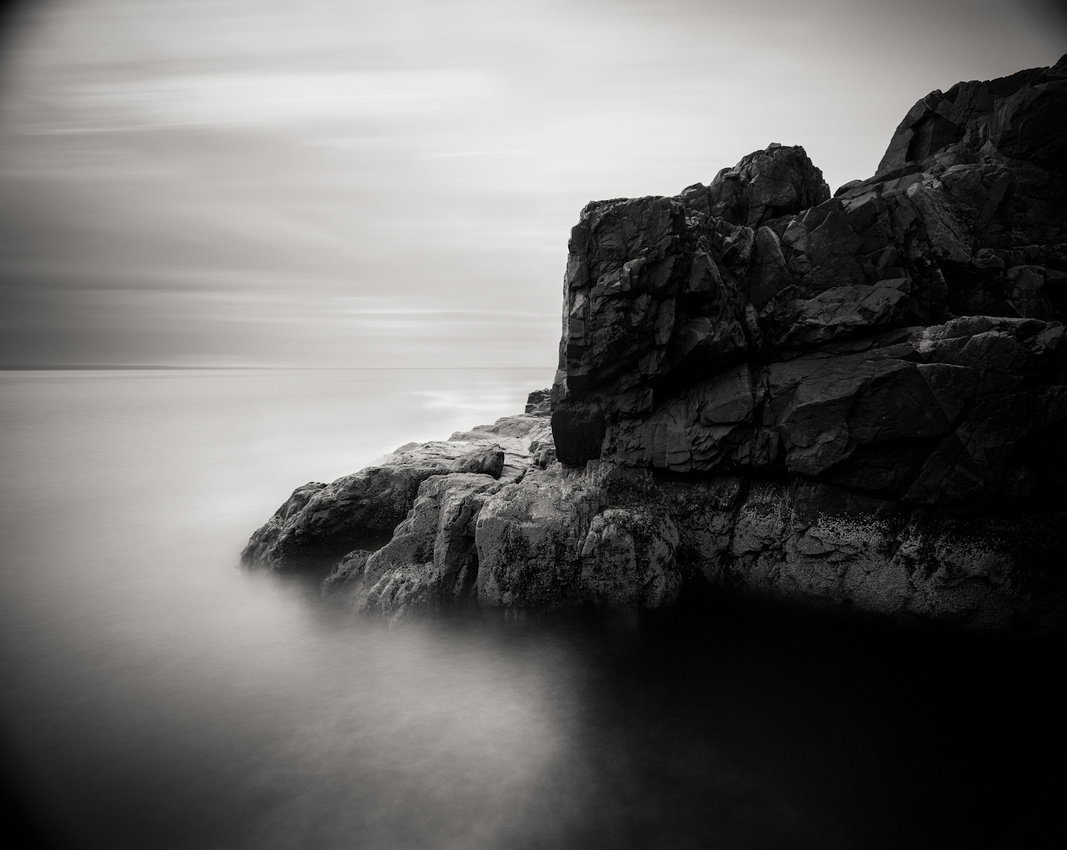 Like I said- I shot the typical head-on sunrise scene, then I shot into the face of the cliffs and made some long and tall panoramas with the 24 tilt-shift and finally it was what I was facing the whole time- the giant buttress that was the other side of the mini cove that I was standing across and the character it had that became the mysterious feeling and foreboding shot that I was looking for. I shot it and stitched it from three vertical shifted images because it was a little too close to get everything in the frame on my 24mm horizontically and I didn't want to go to the 17-40 f/4.0 because I have been feeling that it's way too soft compared to this lens lately. :-(

The angle of the light was about 85 degrees perpendicular to the subject so although I was initially concerned of lens flare my filter adaptor ring that has been jammed in place since the late winter of 2011 blocked any errant rays from the front element nicely and the movement and contrast of the clouds going by made me want to shoot the scene slow with the ten stop filter. My settings were f/11 at 180 seconds at Iso 100 with the B+W 110 on my 24 3.5 ts-e which was slightly tilted. The light was diffused sunlight that was blocked by intermittent horizon clouds at about 15 degrees above the horizon (around an hour after sunrise).

Iphone- here's where the sun was...

So, I like this image ("Around the Bend")- because it feels like it has some kind of character. Almost like there's some anthropomorphic quality about this ledge- it's barnacles are like gray hairs, it's crevasses like weathered skin, and it does it's job every day. Versus the happy go lucky east facing scene with the rising sun beams all cheery and "life is so perfect for you", and "isn't that nice!", and all. Once again- it's just that I've made that picture already- that's what I'm talking about here, that's the crux of what I'm going for- I don't want to make tomorrow the picture that I made yesterday, like. So the images that I am getting ready to make tomorrow then are worrying me just a little bit! Because the morning weather is calling for my favorite: Fog! and I've been considering how to approach finding the scenes of tomorrow morning all day long today and can only really see the images that I've made already! But maybe I'll get lucky. :-)

So wish me luck and good luck to you too! And here's a hearty high-five to you fellow life-doer! I hope we do a good job tomorrow!

Have a nice day, -Nate from Maine, Usa.

One more from that morning-

Sely Friday(non-registered)
I love the first and last pictures. The first one is with your tilt too? It has such a depth to it. I've come back to it a few times already today.
No comments posted.
Loading...
Subscribe
RSS
Recent Posts
Update Summer 2015 iPhone beat me at my own game- Dream Job: Photographing a Lexus ad in the deep of winter in Maine Update: got married, shooting flash, and snow on the ground. The 26 hour day- Triptychs and diptychs oh my! On maintaining creative momentum, or How I learned to stop worrying and love the process Revisiting old processes reaching for new results. Cape Cod before's and after's's's's... On Breaking the Rules= Don't Always Show Your Best Work?
Keywords
maine acadia national park photography have a nice day nate parker photography black and white acadia national park acadia bar harbor maine photography canon
Archive
January February March April May June July August September October November December
© Nate Parker Photography
Powered by ZENFOLIO User Agreement
Cancel
Continue