On maintaining creative momentum, or How I learned to stop worrying and love the process 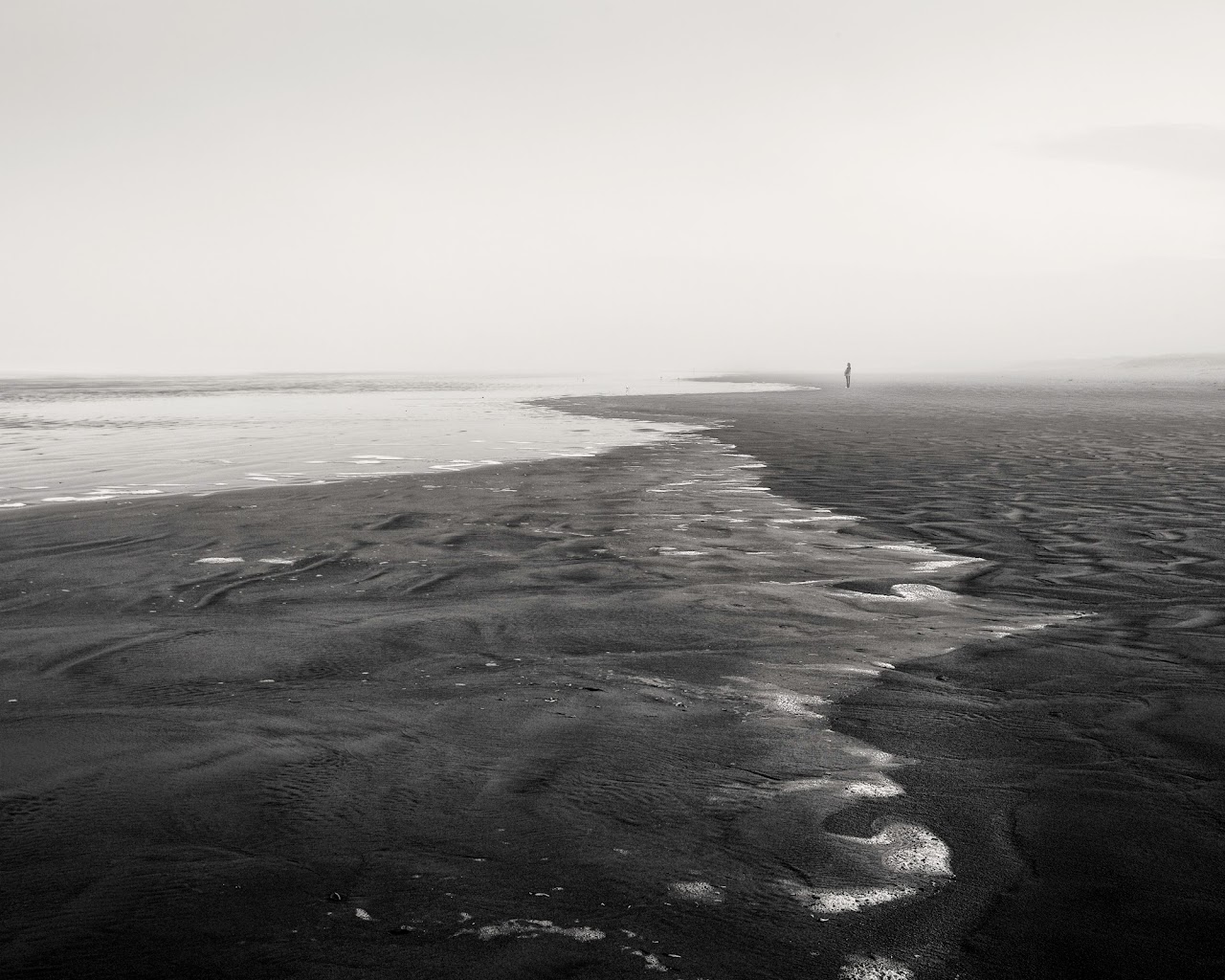 "Seaside Meditations" Seaside, Oregon. (I don't understand what that white line is doing on the right- some kind of uploading artifact that I'm figuring out on right now-)

Every once in a while I find myself struggling to keep up the pace of making new 'good work', photographs that is, and the haunting idea of "maybe there will never be another 'good picture'" crosses my mind. It's not an impossible possibility- but that would be bad, hang it all up and put the kit up for sale on Ebay kind of bad. The worst kind of bad! A very real challenge that faces my photography is that I live on an island, it's attached to the mainland by a bridge but it's still an island. The island (Mount Desert Island on the coast of Maine), does happen to contain Acadia National Park, which is completely beautiful and has all kinds of different terrain and always gorgeous and varied landscapes, but I've been photographing on this island and in Acadia for the last 14 years and after a while it feels like I've made all the photographs of all the places in all the weather, from macro to 360 degree panoramas from dawn till dusk and into the night. That's not really true- there's always more places to find and more weather to influence them and more ways to photograph them, but I'm human and sometimes it can seem like there are a finite amount of possibilities. Certainly it does become more challenging to tour around the island and through the park with my gear and feel as inspired as I felt ten or five years ago while I was doing the initial discoveries. And the chances of going out to find something new and exciting are definitely not as productive feeling as it used to seem to be. So sometimes that can be a bummer. I remember "back in the day" while I was chasing sunrises thinking that if I get skunked today then the chances will be better tomorrow for getting something amazing, and if it didn't happen tomorrow then the chances would be even better the next day- somehow thats permeated into maybe sometime this month I'll find a novel photograph to make and work on that thrills me close to what I used to feel. And that's scary.

So I've been fighting this skeleton in the closet for a while now and more and more it seems each time I go out to make new work. It's so easy in comparison to go someplace new even if it's as close as 2 hours away by car and see clearly an exciting image to make- and that's one of the great values of travel, but I don't get to do that too much. My folks live on Cape Cod though in Mass and whenever I visit them I can usually charge up with the inspiration of finding something new, and I'll often stop in Boston on the way to partake in some street photography and get some fantastic pizza in the Italian North End, but I'd like to think that it shouldn't take going so far in order to satisfy the desire to make a good image.

Therefore I've picked up a few tricks along the way that helps break up the feeling of being stuck on the hamster wheel and repeating myself like a stuttering photographer in a terminal feedback loop. I added filters (neutral density, graduated neutral density, polarizers), I went on a panorama bender for a few years, an HDR addiction for another few, now black and white with the occasional digital filter from the Nik Suite, abstracts through camera motion (kinetic photography), macro studies (not as much there so that has plenty of room for exploration), still lifes in my home studio using natural light and off camera flash. And there's really lot's more to explore so there's no reason to panic.

Part of the problem though lies in that there have been years when it seemed like I could make as many as three or so great portfolio worthy (my portfolio that is, not Ansel's) images a week- week after week after week. So to compare the productivity of now to then seems like I'm way off the mark. But the root of that problem would seem to be the idea of competition. Competition with myself. Comparing now and then. Surely I feel like I'm a much more mature photographer than I was two or three years ago, (last year is too close to consider without imparting emotion into the images and remember when making them). So I do feel like I'm on the right track. And I try to stay somewhat removed from considering what my peers are making and comparing with them- I hang out on the social media a bit but hardly as much as I used to, there just isn't enough time! Speaking of time- it's time for a graph. This is what I'm feeling that the graph of my productivity might be represented as: the old bell curve. Nobody like a bell curve!

Realistically the graph wouldn't bottom out on the right like this does, I just didn't really feel like creating my own graph so I apportioned one from the internets. This graph would go to show that initially as a newb photographer there is nothing but dung, but after not much time has passed you develop enough skill to make dependably satisfying imagery, then you're on fire!, then you develop your harsh critical inner voice that informs your sensibilities regarding making new work and it's all down hill from there! But my point here isn't to be pessimistic, my point is to share the conversation that I've been having with other artists over the past few weeks regarding this.

Key point number 1- focus on projects. Ken Perrin my glassblower cohort (http://www.atlanticartglass.com) and more recently my photographer friend Heather McKenney (http://hmckenney.tumblr.com) reminded me that cohesive work is buoyed through focussed projects. This is no new news to me but a helpful reminder, especially coming from people who's opinions I respect. As mature photographers we all know this lesson, we aspire to make work that compliments our previous work, we fill out our catalog of work in as succinct a way as possible. The "everything photographer" is a tough game played best by those Nat Geo guys like Joe Mcnally and Steve McCurry, but even those guys have a shtick and a style and there are very few "one-off" images or "friggers" (in glassblowing jargon). But after a while even the deepest project becomes worked, and then overworked, and then worked to death! My thing has always been about seascapes- I love landscapes but if there is no water in it I'm more than a little bummed out. And if there's a lot of water in it then I'm the most happy. But after a while worked stuff needs a rest! So this winter, which was one of the coldest and craziest that I can remember, I took to the still life studio and started messing more with photoshop compositing and stuff like that and the refreshing change that I felt making that imagery was like a very real breath of fresh air. However my portfolio doesn't have any of that kind of thing so I felt torn- like: is this what I really want to be doing? It's fun and all but does it fit? And those questions are the really complicated ones that we as artists have to occasionally consider. Can we make a drastic departure in style and not put off our fan base? Is this really the direction that I want to go in?  How will it be received, etc. See it's pretty complicated in the end. I have this idea that my reputation is all that I have, I don't have lots of money and I don't have lots of Brad Pit-ness but I do have something of a style that I've worked hard at and therefore a sense of what is good and bad and right and wrong, especially when it comes to photography. So is the artistic pursuit of photography that hopefully will get me through my whole lifetime, which will hopefully be long, and hopefully will be as interesting and fascinating to me 20 years from now as it was 2 or 3 years ago. Am I overthinking this? Do you guys ever think on this kind of thing? Has any of this made any sense? Have I just spent the last three hours lining up words vainly and should I have been trying to make pictures instead? Did the chicken really come before the egg? Does it matter that I am even alive?

I'd appreciate your thoughts on this in the comments-

I do know that I will be pursuing two newish seascape projects that will keep me entertained. I do plan to go back to the big cities a couple times this year to make more street, I'm looking forward to some more still life bones and photoshop projects, and who knows what next year may bring in the area of inspiration. Maybe by then I'll have taken up something freaky like skydiving and start in on freefall photography- that's the great thing about life and living, you never know what tomorrow may bring! Right?

For now, have a good one-