When Angry Farmers Attack- and Yes It Was Worth It. 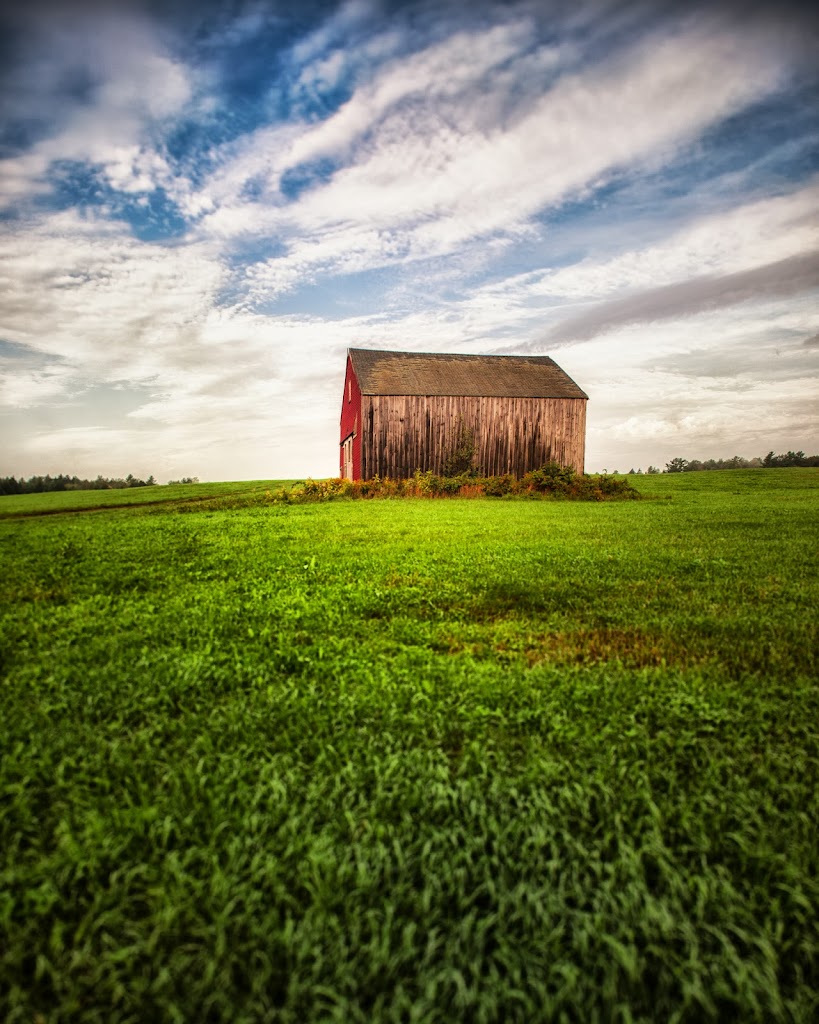 Right then- so here's this, I was debating telling you all about this, but what the hay! It was Thursday and I was rolling through some of the most beautiful farm land through the interior on my way to the south coast of Maine when I passed this really attractive barn and field combo. You know the drill- you're cruising along not expecting to see anything photographic and then a great subject pops up and you do the "oh look at that- that's real nice looking" and keep on driving for 20 seconds until you slap yourself on the forehead and say "what am I doing! Am I a photographer or just a camera carrier!?" and double back to do the deed. Which I did do all of the above. Let me set up the scene for you- it's about 08:30, morning fog burning off still and the sun heating up another beautiful fall day. I pulled into a little pull-off where there was a property for-sale sign right across the street from the barn which was set back off the road in the field about 200 feet or so. Where I was shooting with a 24 f/3.5 Ts-e I needed to be more like 80-100 feet from the barn, so I noticed that there was a nice little footpath over the berm leading from the road into the field. It was as quiet as a Maine morning could be standing in a lush green field off a "blue highway" and I was about two photographs into my usual five or ten minutes of reconnoitering a new scene, feeling out the photo- when some guy on a hilltop about 200 yards away and leaning around the corner of an old shed yells out to me "Hey! Can't you read the signs?!"

One of my favorite things about pursuing photography is that making pictures gets you out into the world and gives you an excuse and a reason to go places and meet people that you otherwise wouldn't have. I've had some really interesting conversations with all kinds of different people that I never would have had if it weren't for my camera, and often I think that my tripod and kit bag are something of a passport to interesting places that people can understand. Walking through some private property to reach a location with camera gear is a lot better and more understandable than doing the same with a duffle bag full of crow bars and bolt cutters. Another thing is that I kind of rely on people reading me as a harmless and good person with no ill intentions, to sum it up= I've never had much of a problem at all going around making photography- until that day.

So I holler back as amicably as possible "I just need to make one picture", and gesture with my arms toward his barn and fields and wave a big hello toward him. The third shot through a shift-panorama just completed and suddenly the guy was right next to me, (I remember feeling kind of disappointed in my self for that as usually my situational awareness is a little more functional). "Whatdja think that was a #[email protected]%ing invitation?" he yells- and I mean he was yelling! This guy who was about 50 or so and with probably 100 pounds on me was standing about 6 to 8 feet from me and absolutely shouting/yelling at me stuff like "I pay the #@%$ taxes on this $#%! place and you come right on in here or whatever- and "can't you see all the #@$% signs, you know what they $%&@ say?- " and the thing is, I really never saw a No Trespassing sign. There are always No Trespassing signs, landowners put them there for at least they won't be held liable if someone does trespass and get hurt, you can't sue a landowner for trespassing on the property and then falling in his old open well. And he's keeping on yelling! I mean he's totally leaning into every word- absolutely screaming at the top of his lungs- it was ridiculous! Suddenly realized I should take stock of the scene as in like how close is he to my gear, I was standing between him and my tripod so at least he wasn't about to get near that without first coming through me. I was trying to appeal to him that I just wanted to make one picture, I'm from here not from away, that I actually didn't see any signs, that I was going to come introduce myself after I was done etc- I even said something like "come on man, can't we be a little more neighborly like here?" or something. And he never wavered off his attack. He gave a final "get out of here" and I realized that it was time to go like 5 minutes ago and went and skid addled my stuff together and one final little moment of interest occurred to me then. In breaking down my new Gitzo tripod I took a moment to appreciate how smooth and quick those twisting leg locks are on that tripod compared to the old Manfrotto's that I used to have to fumble with and use much more effort on- that is a smooth smooth piece of kit! Long story short- it was a big embarrassment. A totally uncalled for situation, I mean don't get me wrong, the guy was totally in the right, but who does that? You never know what kind of day someone is having and not everyone will honor the code of politeness, and I was trespassing- but I was doing nothing more than admiring his beautiful world. I wasn't trampling any crops or hurting anything or parking in a disrespectful way or anything- I figure this guy was taking fun in trying to scare me or something, or maybe the thing is that so many photographers go and camp out there in front of this very same barn that the guy is just totally sick of it. We'll never know what his motivation was. However, while driving away I gave a little toot of the horn and a wave and I checked myself. I wasn't scared, I wasn't steamed- if anything I was in disbelief at what just happened. What a nut job! 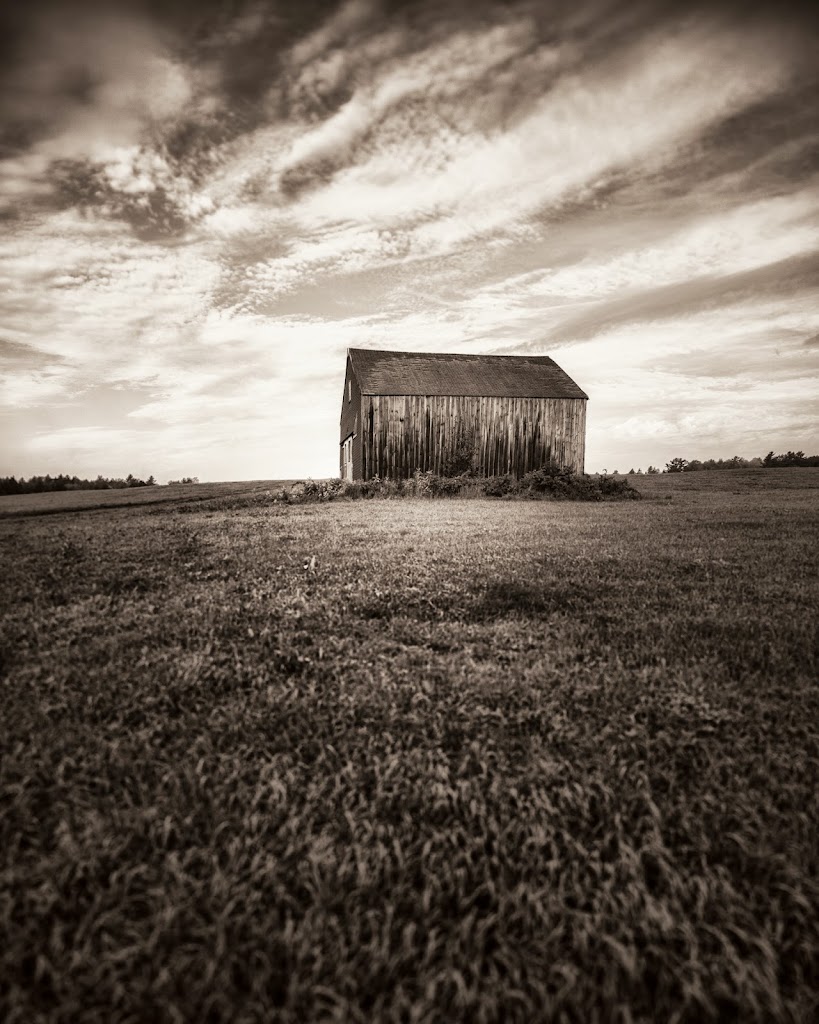 And after a day full of photography this barn and field image has become one of my three favorite photographs of that day. So it was worth it. Lessons learned: 1. Keep going to get that picture, those signs are there as a "suggestion"! 2. Farmers can be real Nut Jobs. 3. A little too much tilt applied at the capture- better to keep the tilt amount at less than 5 degrees on a tilt shift lens.

So, that's that for that. Anyone have a story you'd like to share in the comments about any interesting interactions you've had with irate landowners while pursuing a photograph? I'd be psyched to hear it!

Have a good one everyone, and next time you end up in a situation like I just told you about- just say "Nate sent me!"

Android TV Box(non-registered)
Each of the gadgets I recommend will have a list of which features it supports and also which ones it does not.
Maine Painter(non-registered)
I have to disagree with the general consensus. If I pay to purchase a place that I cherish, and I continually pay the taxes on it so that I can have a private sanctuary (as opposed to a public park which all the public has paid for) and I POST that I do not want trespassers, then don't trespass. You don't own the rights to his land or his vision, or his solitude. He earned those rights and the right to decide who can share it with him.
Craig Lindner(non-registered)
Wonderful pics, not such fun story. You should just silently drop a copy of photo in his mailbox.
Kevin Boyle(non-registered)
Oh dear. Farmers are usually so accommodating too! Sounds like a nut job who has read too many issues of Soldier of Fortune or was having a really... really bad day. Well written and very entertaining Nate.
Mary Angelini(non-registered)
Thankfully he didn't come at you with a shotgun! There are those out there, but like you said, usually people are pretty cool and interested in what you are doing. He was just being territorial I guess!
No comments posted.
Loading...
Subscribe
RSS
Recent Posts
Update Summer 2015 iPhone beat me at my own game- Dream Job: Photographing a Lexus ad in the deep of winter in Maine Update: got married, shooting flash, and snow on the ground. The 26 hour day- Triptychs and diptychs oh my! On maintaining creative momentum, or How I learned to stop worrying and love the process Revisiting old processes reaching for new results. Cape Cod before's and after's's's's... On Breaking the Rules= Don't Always Show Your Best Work?
Keywords
maine acadia national park photography have a nice day nate parker photography black and white acadia national park acadia bar harbor maine photography canon
Archive
January February March April May June July August September October November December
© Nate Parker Photography
Powered by ZENFOLIO User Agreement
Cancel
Continue