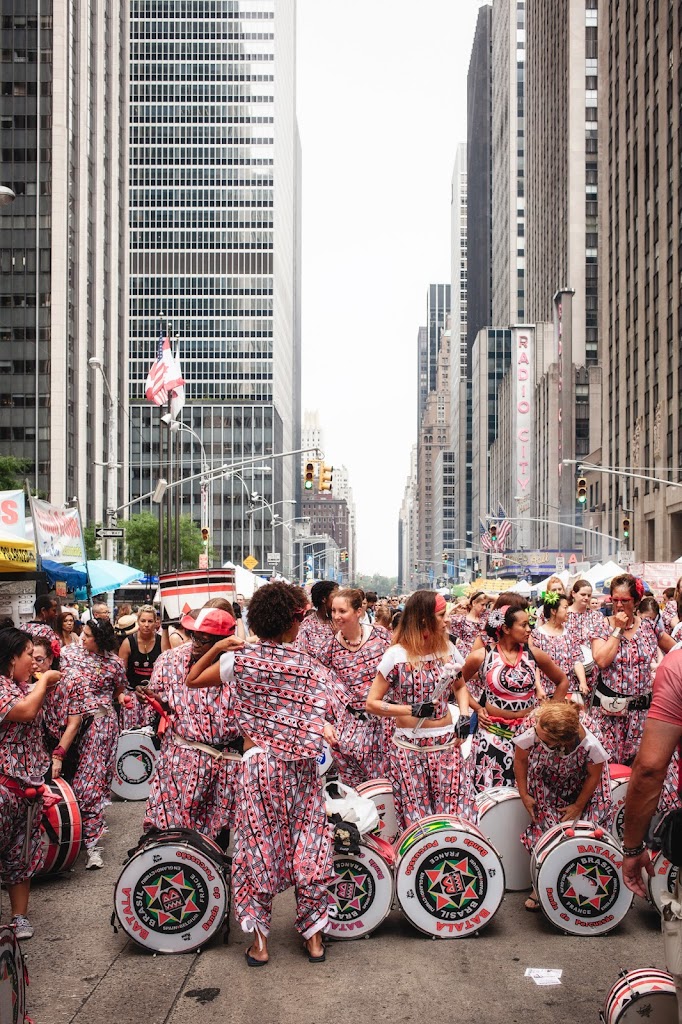 Brazil Day street band on Avenue of the America's.

Just got back from another quick trip to NYC, this time to retrieve the frames and prints that were in the SoHo show of June and July. And it was another chance to satisfy my urge to do some street photography and get to a few of the places that I missed last time down there. Made essentially three kinds of images- tripod mounted long exposure photography of some architecture which I felt only mildly successful at, street/people photography and casual portraiture, and some touristy kind of snap shots. Also of course grabbed two dozen bagels at Terrace Bagels in Prospect Park, Brooklyn- which are the Best bagels ever!

I used to think that New York City was a lot further away than it really is- probably somewhat due to the insulated and sheltered feeling you can get from living on an island way up in Downeast Maine. But it's really only 500 miles to my buddies apartment in Brooklyn and leaving early to beat the traffic and driving "determinedly" gets me there in only 7.5 hours. And what a culture shock it can be! A little disclaimer is that I used to live in NYC briefly 20 years ago (staying with friends), and I also lived in Boston for ten years in the 90's while going to college- so I'm not totally a country boy out of my element when I go there. And even if I was- it's a much safer city now than it was when I was there last in 1993.

A few memorable highlights of this trip are: going to the freak show/burlesque "Muppet Show" at Coney Island on Saturday night, the humidity, riding the elevator with a see-through roof up to the "Top of the Rock" and the phenomenal view up there, the humidity, the promenade in Central Park, again the humidity!, Brazil day street festival on Avenue of the Americas in midtown, the awesome burrito from the street vendor at A and 2nd in Alphabet City, the Coney Island boardwalk and especially Brighton Beach with it's incredibly interesting looking old Russians. And The Cyclone! Also, my last favorite moment was when I was picking up the bagels first thing of the morning yesterday and there were these three plain clothes New York's Finest having coffee and giving each other the routine- and one em says something like "ya and how bout you buy me a lobster and a steak too", and the other take-no-$#!% detective looking guy say's "ya I'll just go catch the lobster for you too!" so I say: "I'll catch the lobster". And they look at me and take a half breath and chuckle just a little bit, and I say "no really, I will. I work on a lobster boat in Maine, I'm going there right now." And the oldest of the three, the one who was getting the most deferring out of respect by the other two say's to me, almost in a check to see if I'm full of it kind of way, "Oh yeah, well what's the name of the boat?" so I tell him the F/v Never Enough and he looks satisfied. At that point the bagel cashier clerk tells me that it's cash only, which is too typical of many places down there, so the copper trio tells me where there's an ATM etc. And this is the best part- not much of a thing, but sometimes it's the little things- as I'm leaving Terrace Bagels with my coffee and two huge steaming bags of fresh deliciousness, one of them gives me a real nice and real genuine look in the eye and say's "have a good day buddy". So, that was the last thing I'll remember about the good people of New York. Where I'm a native Bostonian there's always been a kind of competition between Boston and New York and my Dad used to travel to NYC for work often and speak badly about it and the people- and it was a completely different place back then, also both my Dad and my Mom are from there so would talk of it and the "mean and dangerous" fast hustlers who live there. And if you go there with that kind of distrustful and fearful attitude you'll probably be received that way. But one thing about street photography that is great is in order to get close enough to get a good shot you often have to talk to the people and have an interaction, even if it's just a couple of quick sentences. For the most part 90 percent of the people who I asked to make their picture were completely happy to let me do so, and I would tell them it's because they look great or look cool that I wanted to photograph them, and that makes people happy to hear that. I was staying with my buddy Larson Harley, who's a fantastic street and subway photographer: http://www.larsonharley.com and we photographed together Sunday in Midtown Manhattan, Central Park, and then over at Coney Island. His approach to photographing people is either asking them nicely if he can make their picture and smiling and laughing with them, or surreptitiously sneaking a shot with his iPhone or camera from the hip. But more often then not with every other picture he's having a small conversation with the people. I can't lie and say that he hasn't affected my own approach somewhat- either way I think the last thing that we want to do is make someone angry or suspicious because we made their photograph. Sometimes I'll just made a gesture like a head nod and a thumbs up or show them my palm with a nice wave and a smile, and as Larson mentioned at one point usually you'll have a pretty good sense of who not to approach= serial killer looking nut jobs etc. 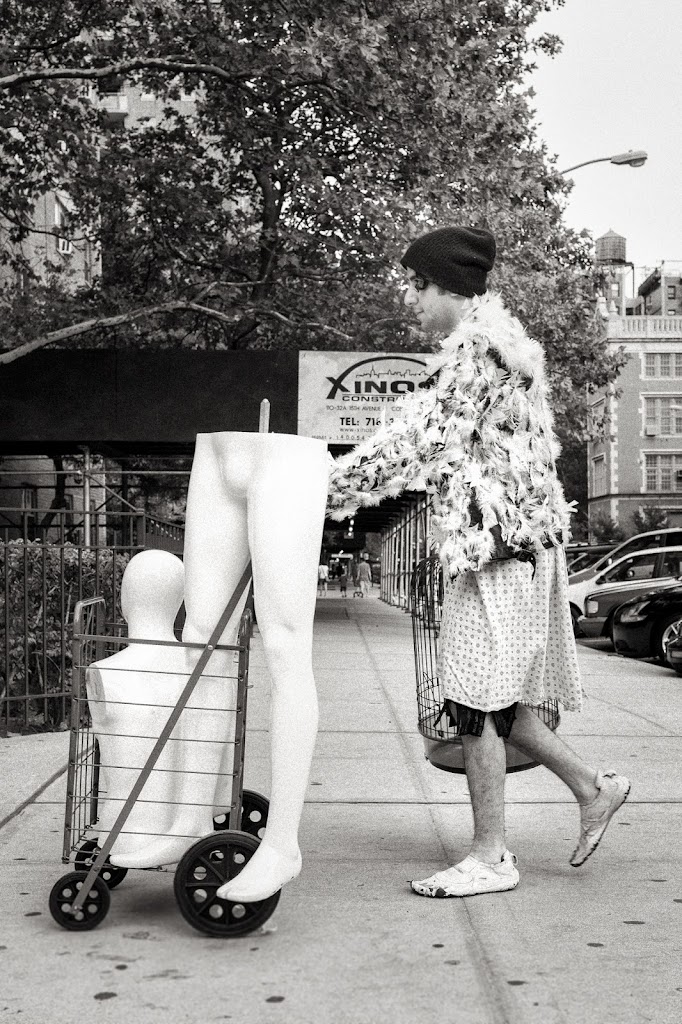 Body Snatcher on Avenue A. (this one I saw through the window at a bar having a beer in the late afternoon on Saturday. I had some cash out about to get another when I saw him walking up the street- stuffed the money back in my pocket and ran out the front door and across the street cause I wasn't about to let this shot get away!)

Right then. So I figure I'll update this post throughout the week or next couple weeks with more images as I finish working on them, so check back occasionally or you'll just see the links on the Facebooks. I sure don't shoot as many photographs as some but there are still 593 images to wade through to find the picks and pans. And it was a great trip however it sure is nice to be back home in Maine! 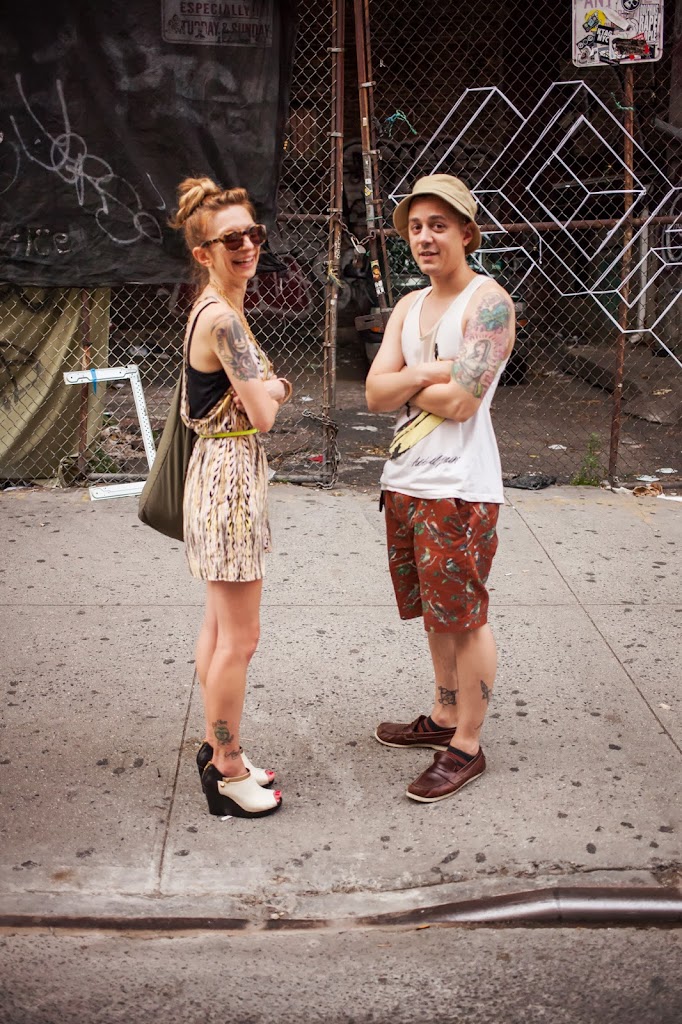 Typical inhabitants of the Lower East Side. (missed the focus a bit but I like their demeanor). 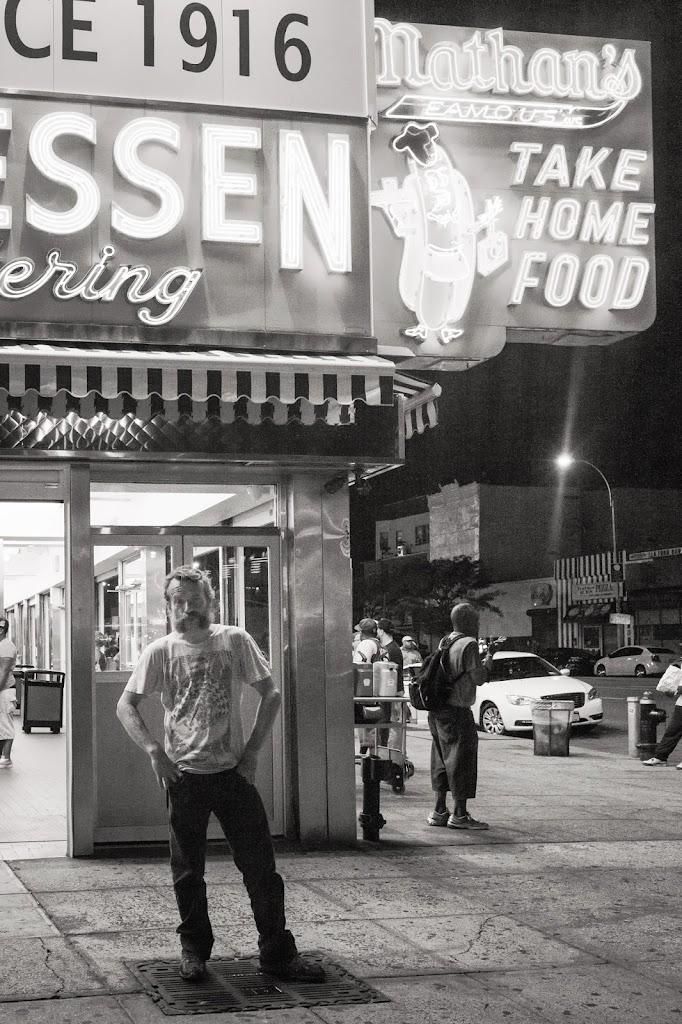 Me at the famous hotdog establishment that I was named for. Iso 6400. 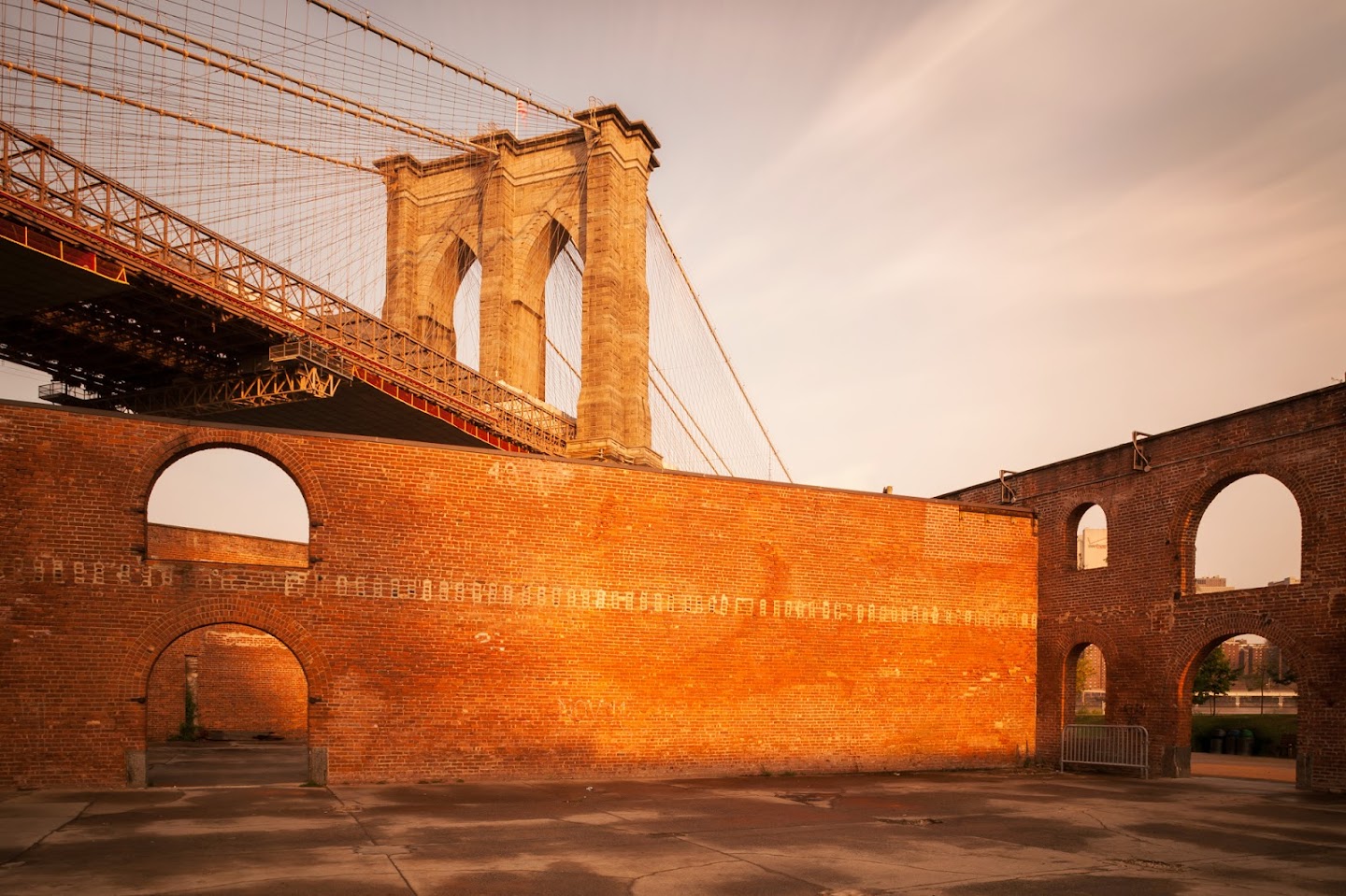 Brooklyn Bridge from within old warehouse walls. (From sunrise down at the Brooklyn Bridge Park. I wanted to make a long exposure of the skyline of Manhattan from Brooklyn while the sun was rising (still working on developing that one) in retrospect, from my experience of driving out of the city at dawn twice now this summer, the ultimate time for the skyline shot would be more in the blue hour when the lights from the buildings will add to the scene. And there are a million great shots of the Brooklyn Bridge from the bridge but it's a lot more challenging to frame the bridge from down on the river. There are all kinds of anachronisms going on that are distractions and take away from the bridge- I was looking for something classic feeling- therefore these walls of an old warehouse that must have seen some real action in it's time helped to pare down the scene.) 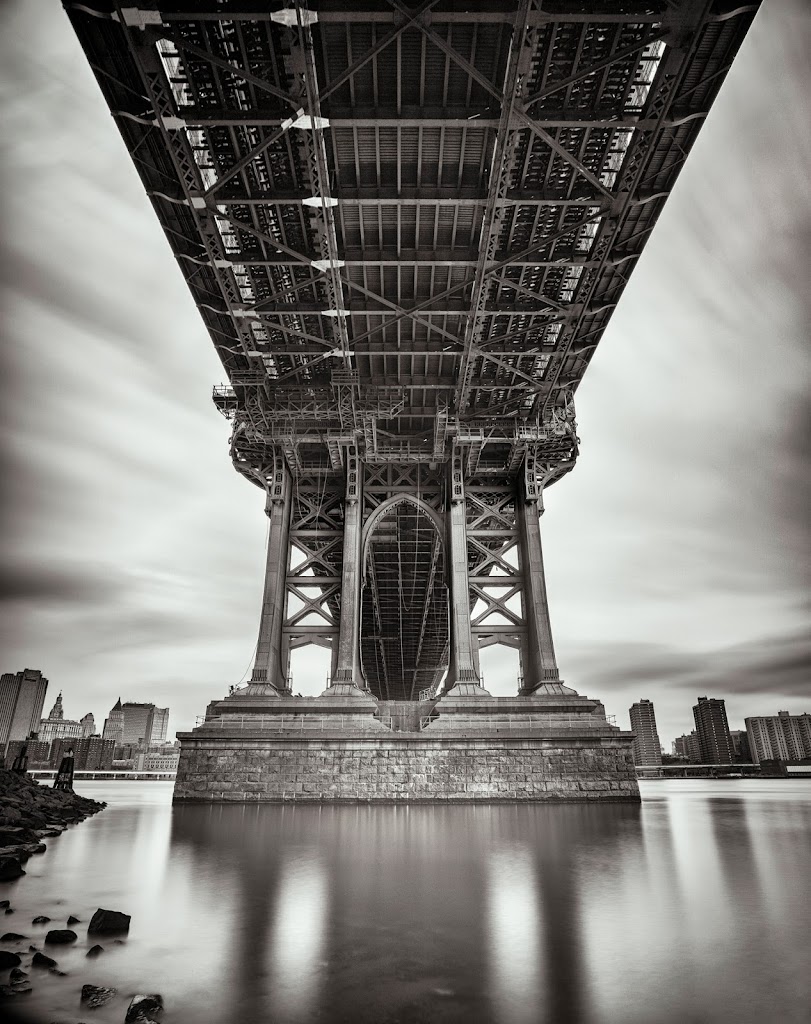 Under the Manhattan Bridge. They call the neighborhood 'Dumbo' (Down under the Manhattan and Brooklyn Overpass). I wanted to photograph the bridges- I had a couple hours, I made the requisite directly-under-the-bridge-long-exposure take and the thing is: I thought I was pretty symmetrically in the middle- a lot was going through my head at the time, as well as the train was going over my head every 45 seconds or so, which was kind of weird- in hindsight: I was way off! The whole time I was under there and my shutter was open and I had time to look around I was looking for old washed up guns with the serial numbers filed off or dead bodies, but alas I didn't find any. More with the Disneyfication of NY. 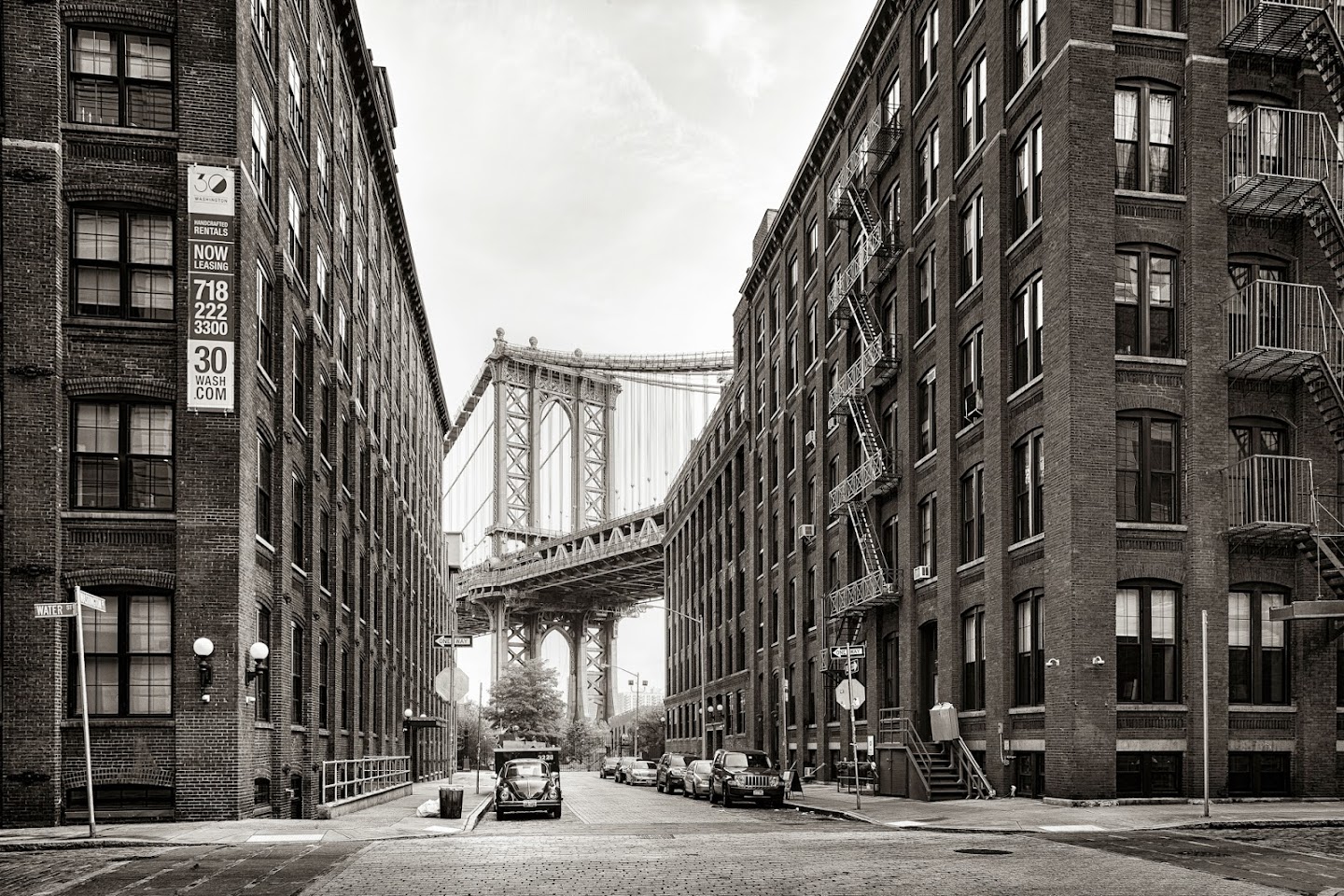 Dumbo on the corner of Washington and Water st. I copied this composition somewhat from an old classic image from the 70's that I love- here's that one:

Photographed by Danny Lyon, June 1974. The differences are massive first of all this is shot with probably a 50mm lens versus my 24. Then the old gigantic cars are totally awesome! Then it's a lot more seedy and dangerous feeling than it is now- now it's like a yuppy loft fest. And there is a generous amount of litter, grime and rain water on the street to add that little bit extra. Also the blacks and shadows are really crushed in Danny's shot- that make me envy it all the more. I just may look into that myself...

And that's it for now! Have a good one- Nate!

Awesome shots(non-registered)
Got some good shots.. next time go to Soho and Union Square Park, Washington Square Park, and Alphabet City!
Stephen Cairns(non-registered)
That last one feels a bit like an Atget. Like that one a lot. You are also rocking some really cool facial hair right now. It's making me think I need to reconsider my typical beard (trimmed and slightly bushy).