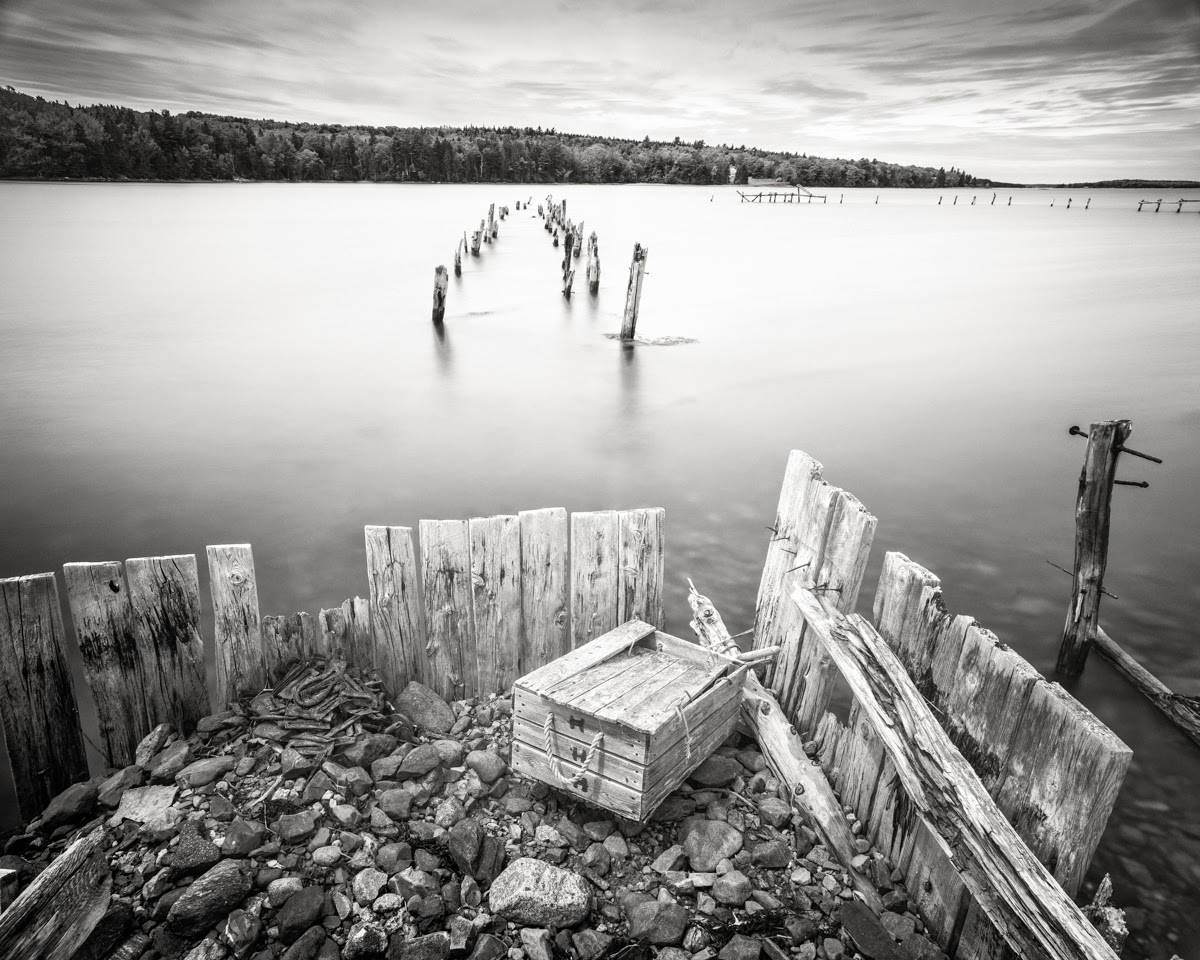 So here's a one where I had to modify the scene a little bit to make the picture that I wanted to make. When I first looked at this scene the only difference was that there was a large pane of broken plexiglass where the old lobster crate is now. The plexi was making a lame reflection of something bright and it didn't take me but a second to decide to physically photoshop it right on out of there and put it behind me and when I did  the huge pile of old HHH lobster crates right behind me caught my eye and I picked the most available interesting looking one to take plexi's place. Some people don't believe in this kind of practice of modifying a scene to better suit the image, and usually I wont because the images I make most often have big, attached-to-the-Earth features that you can't move even if you wanted to! But I'm not averse to manipulating a piece of driftwood to make a different feeling picture or removing an empty beer can etc. Any thoughts>? What do you do?

Gregg Marquardt(non-registered)
I agree with Jim Denham: if you're a journalist your goal is presenting accuracy. If you're a composer your goal is creating an artistic vision. I once moved one fallen leaf onto a rotting log to add some color to the composition; it's become one of my most popular shots I've ever taken (maybe not because of the leaf alone, but it certainly helped).
Jim Denham(non-registered)
I'm totally with you Nate - we're composers more than anything else and if removing one item on site, or in PS for that matter, and replacing it with something else (or not) makes the image stronger, do it! When I look at the image, I'm not seeing what isn't there, but what is. This image has quite a bit more range than most of yours bud - looks great!
No comments posted.
Loading...
Subscribe
RSS
Recent Posts
Update Summer 2015 iPhone beat me at my own game- Dream Job: Photographing a Lexus ad in the deep of winter in Maine Update: got married, shooting flash, and snow on the ground. The 26 hour day- Triptychs and diptychs oh my! On maintaining creative momentum, or How I learned to stop worrying and love the process Revisiting old processes reaching for new results. Cape Cod before's and after's's's's... On Breaking the Rules= Don't Always Show Your Best Work?
Keywords
maine acadia national park photography have a nice day nate parker photography black and white acadia national park acadia bar harbor maine photography canon
Archive
January February March April May June July August September October November December
© Nate Parker Photography
Powered by ZENFOLIO User Agreement
Cancel
Continue