Snow Shadow Abstracts in the Dooryard

Wow it has been wintery around here like it used to be way back! We've had a few nice snow's and the last was a real sweet "dumpah" that brought us around a foot of super powdery dry fluffy snow that with the winds blowing 20-30 knots for a few days on, made for some interesting snow shapes and deep drifts. My little Volkswagen was almost disappeared in one of them. The snow has also brought plenty of photographic inspiration, if only I could get over the fact that the wind-chill has been regularly down into the -10's F. You can dress for the cold and you can deal with the wind but photography can be difficult when those wet clingy bits want to keep sneaking around onto your lenses front elements. I don't really mind getting my gear a little moist, my 5D2 can take it apparently pretty well and it sure has, (remember they call it weather resistance not weather proof!), but I don't like being in the kind of weather where I'm forced to constantly wipe the front of the lens with the microfiber because it's so soaked. Here's an aside referencing those last two points: reference #1-- so I was down at the lighthouse a few weeks ago before the snow had fallen and this particular day was thick with a misty fog- I wanted to go visit the most popular lighthouse around which is right down the street from us and because of that I never go there- because I've shot it so much already, I had my 17-40 on due to the weather (versus 24 tilt-shift), and I wanted to make long exposures of the lighthouse but the blowing mist was soaking the front of my lens. I would microfiber it dry and open the shutter but in 10 seconds the front of the lens would be deep with beads of moisture- but: because I was shooting a fairly wide aperture and focused to infinity the moisture did not resolve and the scene was just as it appeared to the eye, misty and foggy and mysterious. Reference #2 as to the weather sealing of the kit: right then, so I've grown up on the Atlantic Ocean and I'm descendent of a line long of seafaring captains and pirates and Coasties, so in that regard one of my top priorities when I'm down by the water shooting is to never have to be rescued or end up in a situation that would not only imperil myself but the lives of others trying to save my sorry ass- so far so good. Not to say that I haven't taken some waves or that I haven't had my fight or flight reflexes kick in at some point or other when trying to make a picture! So on this misty day down by the lighthouse I had been photographing some granite cliff features for a while before making the actual lighthouse shot and the waves were pretty large but I was feeling confident about the pattern and frequencies of them and I set up to make the lighthouse shots and got two in the can before, with my Back To The Ocean, I took a wave over my back that poured easily a gallon of seawater down my sweatshirt and came over my head and thoroughly soaked my kit like a football-game-sized-Gatorade-bucket-dumped-by-the-team-on-the-coach, that had me gasping and sputtering and clamoring for my emergency wipe off towel. (Wipe off the gear, who cares about me!) To add insult to injury I retreated to drier footing and unshouldered my camera backpack which was soaked but fairly resistant in itself and drop it down to get my e-rags out and when I bend over to unzip a pouch a huge gout of ocean pours out of my hood onto my stuff, easily a pitcher of beer's worth, and I was like "What!- come on already!"- and, but, everything was not in the end destroyed! Great success! But not one that I would confidently repeat more than absolutely necessary. That was my version of the "polar bear swim" that some of my fellow "Maineiacs" pretend to enjoy.

On to the pictures- so on New Years day I went out into the yard with something of a numb head from the evening before and what popped right out at me at the time were some beautiful sculpted snow drifts that were forming patterns of shadows from the sidelight sun and right away I was thinking abstracts. The first response was to put on the 24 tilt-shift and do the deception-of-perception trick of making the drifts look like snowy mountains from an airplane but I for some reason chucked that right away and put on my 100mm 2.8 L IS USM, which is my least used but most beautiful lens (in image quality), and focused on extracts of little segments of the lines and shadows. Because it was clean snow in direct sun I needed to overexpose, but not by much, to get the quality of white that I was feeling: 2/3'rds a stop if I remember. Then it was all about playing with different depths of field and playing with the frame by rotating the scene "dutch-tilt-like", or changing perspective view points high to low and all. I was channelling classic b+w photographers while doing this- I was guessing at the time that maybe I had seen something by Man Ray like these that I was making but in the end after refreshing myself with his images and thinking on it more I think I may have been feeling more along the lines of Harry Callahan's nudes more then anything else:

On to the pictures for real this time:: 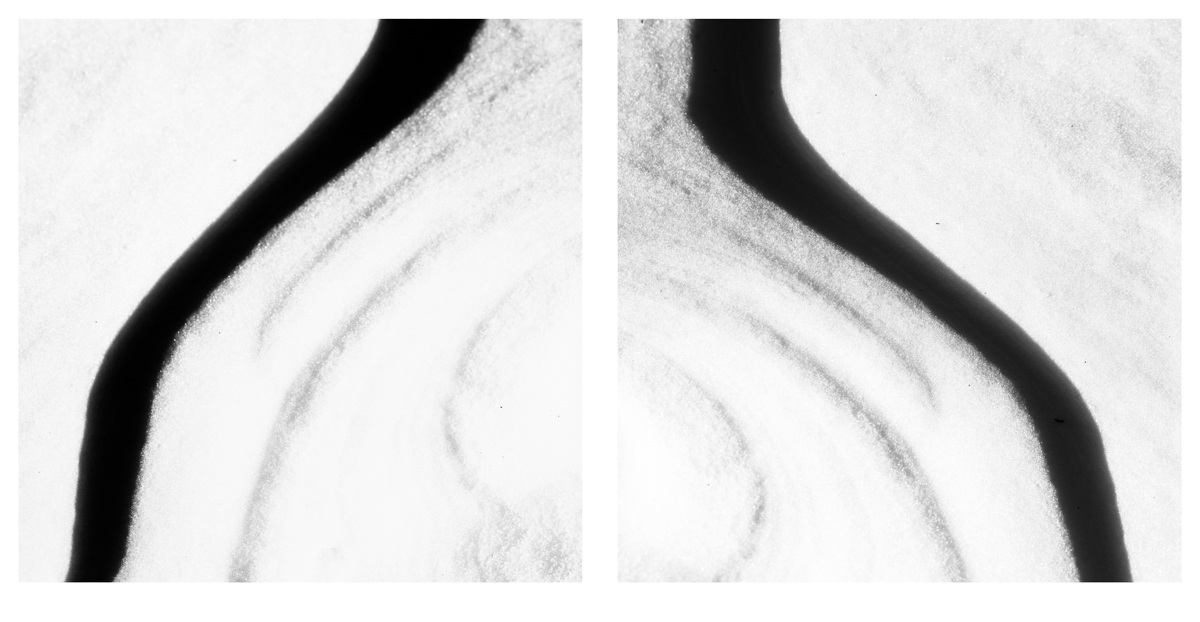 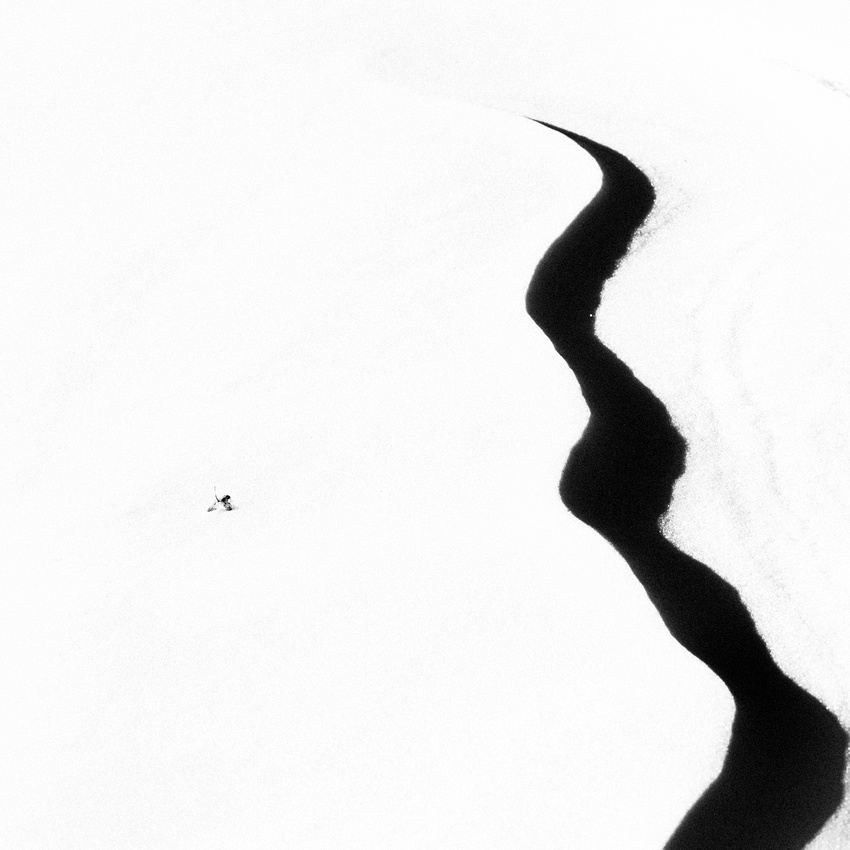 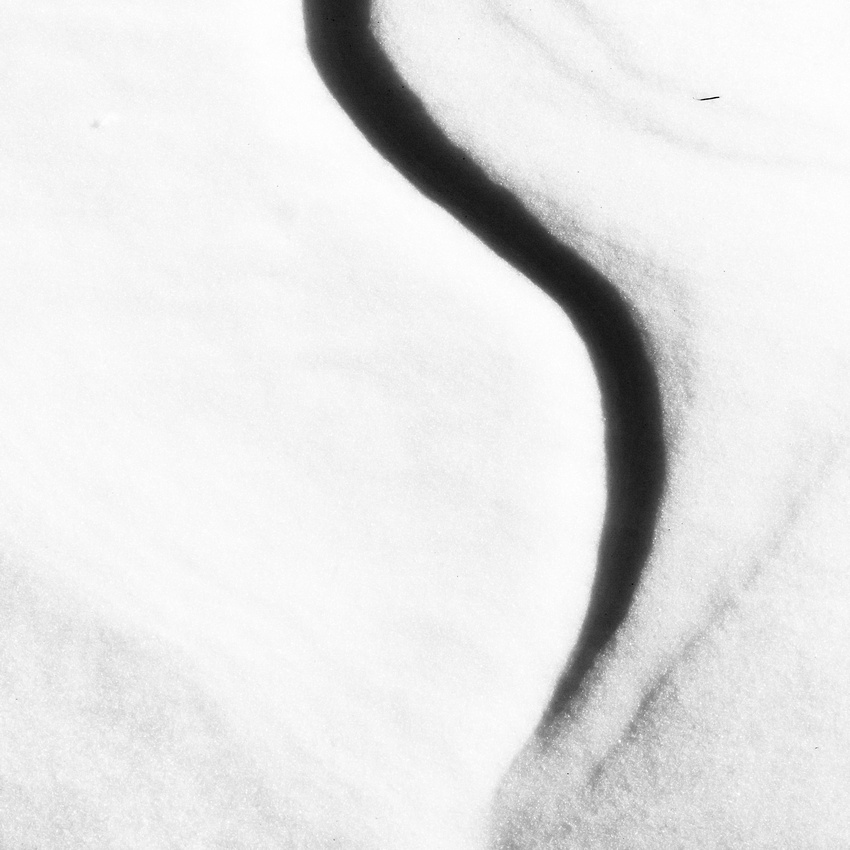 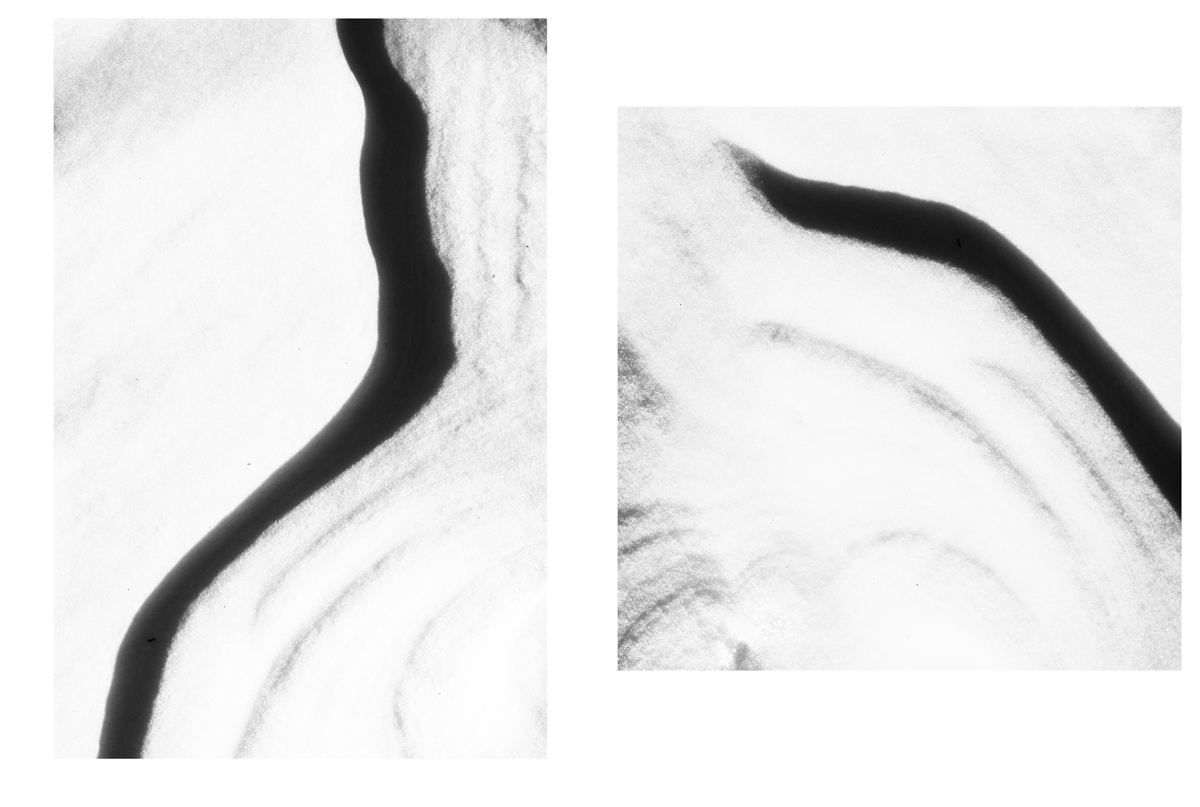 "Dooryard Snowy Abstract Asymetric Diptych II" I know they're different sizes and that's weird but I saw these in the Lightroom grid view like this and it just felt right. 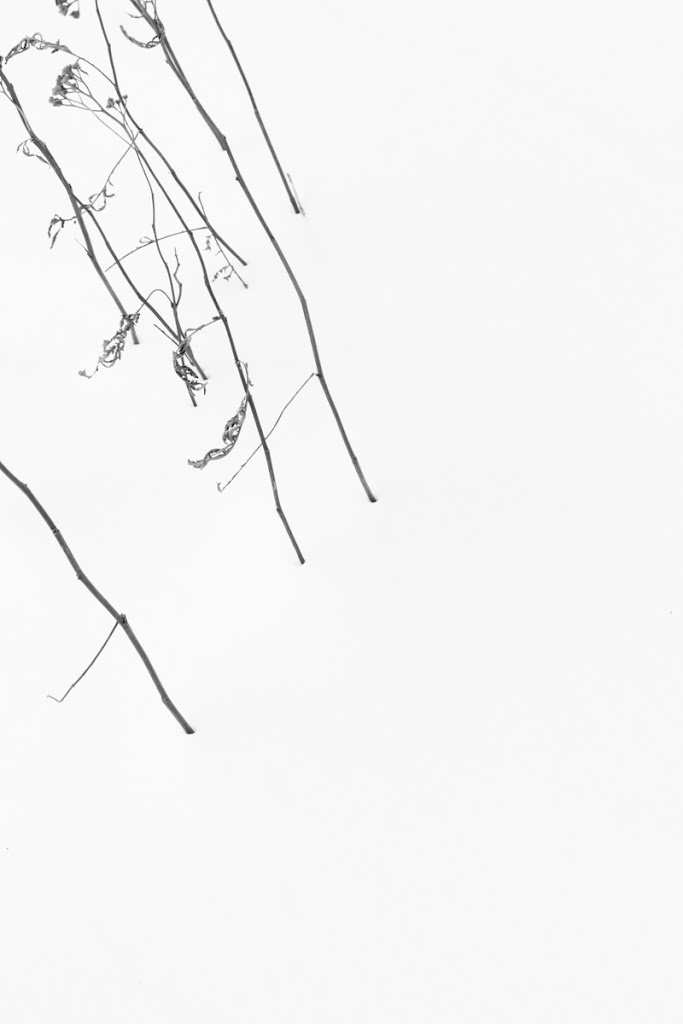 One more thing before I leave you for today, I don't think it's a bad thing to be inspired by the ideas of images or work that you've seen before, or photographers or artists whose work you admire if it leads to good creation. I wasn't directly stealing any particular idea when I was making these- as far as I was concerned photographs like these have been made before, although when I went to look for them I couldn't find them on the interwebs, but that just goes to show my skills as a researcher- and as far as I can imagine nearly every kind of photograph has been made well already so then the reasons we would go to make any particular picture would be more of trying to put our own particular spin on them or to do the style in our own part of the world or to have "that kind of thing" in our own portfolios, or maybe just to hear the mirror slap and the shutter click- there really doesn't need to be more motivation than just that "because we like to make pictures". Personally I really love to work on and develop pictures but that's all after the fact, but if I didn't make anything new then I wouldn't have anything new to work on- and I don't really like to work on the same picture twice so then I look to make new photography of new places and new ideas. Hopefully lots more of that to come!

Here's your homework, if you should choose to accept it- get tanked on some high test coffee and go faffing around your own dooryard making something interesting- you have as much time as it takes, then report back here when you're done-, this message will self-destruct in our lifetime, have a nice day- Nate from Maine, Usa.

Delhi Call Girls(non-registered)
Hey guys here you can meet your desire girl and enjoy yourself with her on the bed.
Gurgaon Call Girls(non-registered)
This is really an amazing article.Thanks a lot for sharing a piece of wonderful information keep it up and best of luck for your future article and posts.
WP Engine WordPress Hosting Review(non-registered)
you have to share with us lots of informative point here. I am totally agree with you what you said. I hope people will read this article.
Discover Card(non-registered)
You have actually established your settlement method, you can login to your account and make all your Discover Card settlements online.
parentpaylogin(non-registered)
ParentPay is the UK market leader in online settlement systems for institutions. It makes certain that loan purchases are safe as well as secure.
No comments posted.
Loading...
Subscribe
RSS
Recent Posts
Update Summer 2015 iPhone beat me at my own game- Dream Job: Photographing a Lexus ad in the deep of winter in Maine Update: got married, shooting flash, and snow on the ground. The 26 hour day- Triptychs and diptychs oh my! On maintaining creative momentum, or How I learned to stop worrying and love the process Revisiting old processes reaching for new results. Cape Cod before's and after's's's's... On Breaking the Rules= Don't Always Show Your Best Work?
Keywords
maine acadia national park photography have a nice day nate parker photography black and white acadia national park acadia bar harbor maine photography canon
Archive
January February March April May June July August September October November December
© Nate Parker Photography
Powered by ZENFOLIO User Agreement
Cancel
Continue