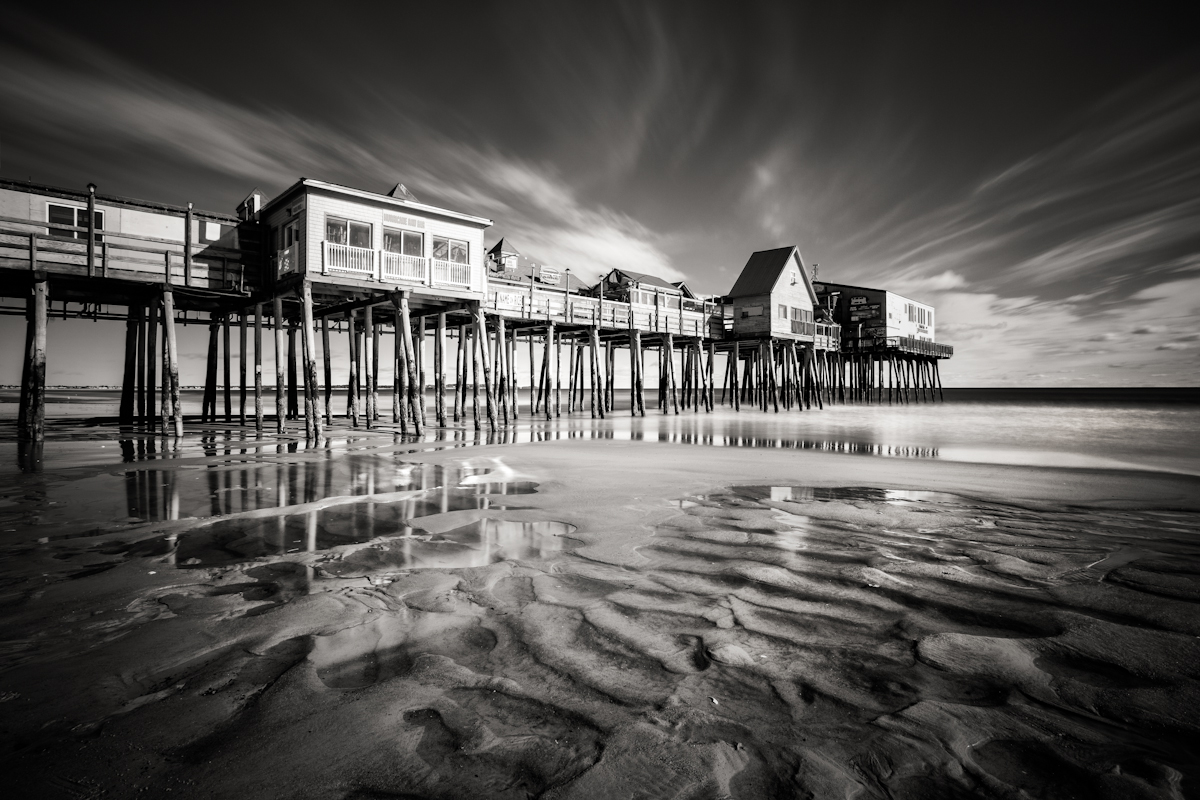 Hey there gang- just got back from the Thanksgiving holiday food/family/fun extravaganza in the Boston area and on Cape Cod and Martha's Vineyard. Good times! Lot's of driving and traffic, got pulled over and got a speeding ticket :-( and the trooper wouldn't let me even make a photo of him for my troubles :-(. But I Did get to make a fair amount of photography between and sometimes during visiting with family and friends, and went on a good few photo excursions which included Cape Cod and Martha's Vineyard beaches and dunes, a 140 foot tall crazy looking sewerage treatment plant out in Boston Harbor, went to the North End and did some street shooting and ate excellent pizza, and stopped on the way back at Old Orchard Beach in Maine to photograph the boardwalk. Ideally a trip like that can combine family and photography, I love shooting in Boston and on the Cape- there's lot's to see and the biggest thing is that I'm off the island that I live on in Maine and there's photographs to be made everywhere! But because I'm primarily visiting the folks it's only really a bonus if I make new work that I'm actually proud of. And it wasn't until I was only 3 hours from home this time when the shots that I was making were giving me that satisfied feeling of actually getting something good. Anyways...

Right then- on to the technical stuff: so this guy who I've known over on the Flickr for a few years sent me an email this morning with some good questions about black and white and I figured that I'd answer him and post it here at the same time for free content! Here's the email, partly redacted to protect privacy et al.::

I'm not really well experienced with shooting in black and white and wanted to ask you a couple questions, because the b&w work you've been doing lately is about as good as it gets in my opinion. (editors note: thanks buddy! that's a good way to get me to answer too!) I was mainly wondering if the optimal conditions for shooting in b&w are different for shooting in color. When I shoot in color I mostly limit myself to the sunset/sunrise range. Or cloudy conditions for waterfalls. But it seems like it might not be as important for b&w.

I've also noticed the most of my favorite b&w work is fairly long exposure, usually with a solid ND filter. Especially with water. When shooting color I like to get some hint of texture in the water so I try to hit an exposure "sweet spot" of around 1/10 - 1.5 seconds. But it seems like much longer exposures, the kind that blur the water into a super-soft, texture-less substance, benefit b&w much more than color. I'm guessing it's because it more readily defines areas of light and dark that way, but I'm not sure.

Finally, do you find that adding a sepia cast is always a good thing, or only sometimes? It looks great in your work, but I have found that in other shots I've seen from other people, it doesn't always impress me (but it might just be that it's because they're doing b&w the wrong way for a sepia cast).

Thanks a lot for any advice! I might try to get out tomorrow to shoot something."

Right then, thanks Justin! (editors note: Oops!) regarding your question #1 one of my favorite things about making black and white photography is that I'm no longer routinely killing myself by getting up 2 hours before sunrise to to coffee and wake and travel to the location etc to catch those dramatic morning colors- because mono is much less dependent on thrilling pyrotechnic skies to make an acceptably interesting image. Definitely though the skies in the morning hours and late in the day when cloud contrasts are more exaggerated are key to image making whether it's color or b+w but it's that particular time of day (thirty minutes before sunrise to sunrise) that were so invaluable as a color photographer, I don't really find myself missing much these days. I'm more looking for storms and storm light and my absolute favorite is fog- which would be from a color photographers stand point nearly monochrome anyways, at least desaturated (depending on viewing distance). Still my least favorite times of day for shooting are mid day, and otherwise any kind of harsh light will still be harsh light in mono or in color. But all those "rules" will just have you making work like everybody else so maybe embrace high-noon and make a new style! :-)

When making mono work we're obviously just responding to texture and light and contrast in the composition, and because it's mono sometimes you can find a freedom of vision through your developments that in color may seem more "heavy handed", but in grays is just another option.

As far as the long exposure stuff goes it works a treat for black and white! There's been a lot of long exposure black and white work being made over the last couple years, if there's an old rotten pier jutting out into the North Atlantic somewhere then we got a guy with black glass on it!- and where I love it and tend to get almost obsessed with finding new ways to use it I'm getting the fear that hopefully it won't ever get that bad juju that swirled like a stink cloud around the whole hdr movement. What I'm trying to say is that there's a time and place for everything and just because it's monochrome doesn't mean it needs to be LE, and conversely just because it's LE doesn't mean it can't be color. Often long exposures are developed as mono because the ND filters have a color cast- some are warm like the B+W 110 and the Lee Big Stopper is cool. It can be really a pretty strong cast depending on how you have your camera set but you can make Kelvin or other white balance adjustments in camera and of course make any other tweaks in your Raw developer later. I really love how good color long exposures look- and you shouldn't disregard the potential there- I'm serious! :-) LE is an option like any other option, it gives you all kinds of possibilities and potential- and it's not just water and clouds that it needs to be limited to. You be the judge!

And lastomatically regarding the "sepia" bit- ya I know what you mean- I hate it when it's over the top in a tasteless way. I'm just warming my final edits a touch because I like the look of printing on natural papers that don't have a lot of OBA's in them (optical brightening secret-agents) and they are warmer in appearance, and I just like that warmer look in my black and whites these days. Blue toned black and whites look sweet or that cyanotype look and all, it's up to you what you like- it's just a personal opinion.

Right then- hope that helps and have fun in the land of the lost hues.

If anybody else has any questions you want me to try to answer "on the air" I'd be happy to hear from ye! Have a good one- Nate! 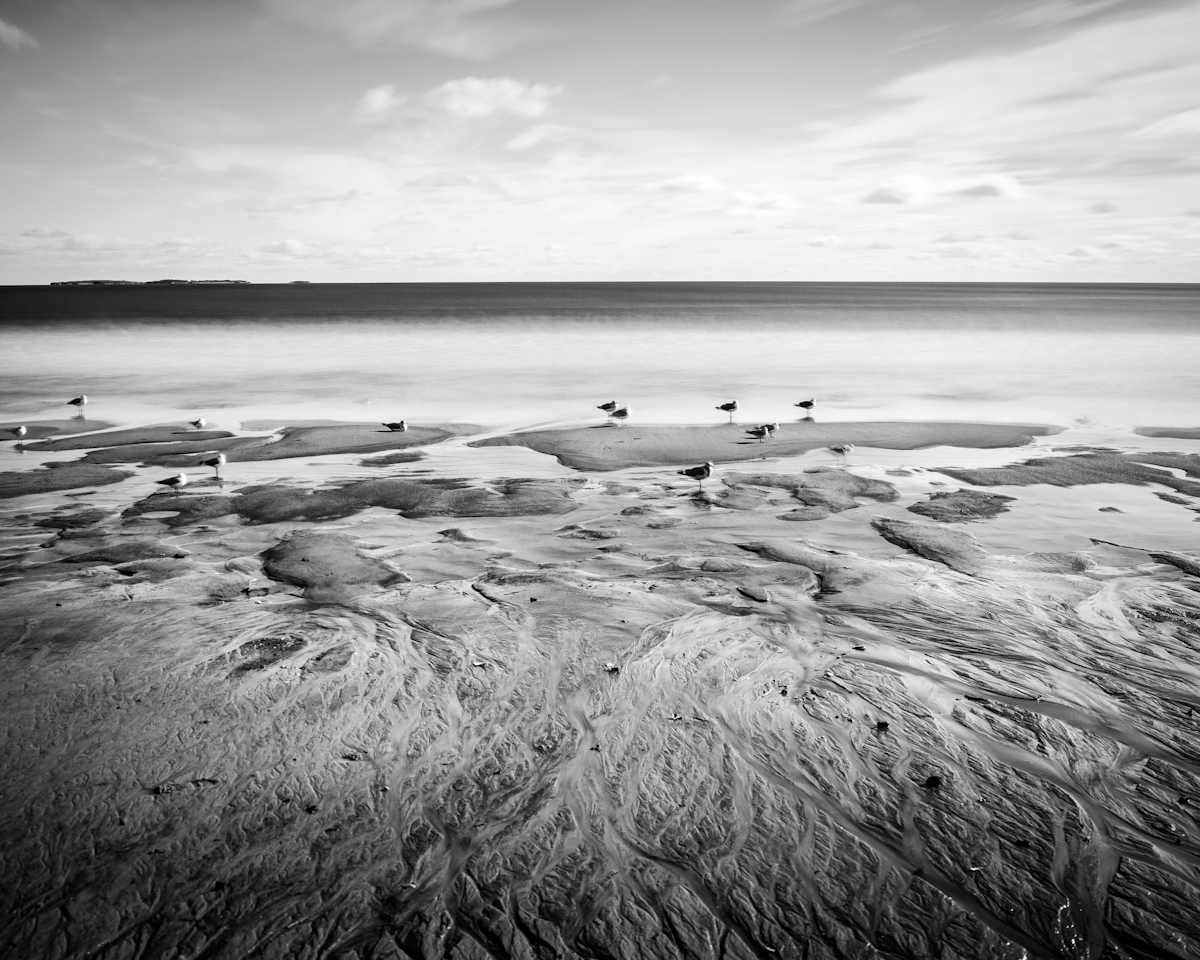 canvas prints(non-registered)
your photos are totaly out o this world. i so love what you have done and how they are shot.
Jim Denham(non-registered)
Great questions and answers! Like with any new toy, we tend to over do it for a while then settle in to looking for the shot we want and calling on the tools we need to get it, regardless if it's LE, color or black and white. I'm still in the playing mode with both the LE and black and white and I'm sure my followers are tiring of it, but it's working for me and I keep learning, so I keep doing! Enough of that - the gull shot at the bottom of the post if money! The random lines in the sand from the tide are just perfect! Good stuff Nate!
No comments posted.
Loading...
Subscribe
RSS
Recent Posts
Update Summer 2015 iPhone beat me at my own game- Dream Job: Photographing a Lexus ad in the deep of winter in Maine Update: got married, shooting flash, and snow on the ground. The 26 hour day- Triptychs and diptychs oh my! On maintaining creative momentum, or How I learned to stop worrying and love the process Revisiting old processes reaching for new results. Cape Cod before's and after's's's's... On Breaking the Rules= Don't Always Show Your Best Work?
Keywords
maine acadia national park photography have a nice day nate parker photography black and white acadia national park acadia bar harbor maine photography canon
Archive
January February March April May June July August September October November December
© Nate Parker Photography
Powered by ZENFOLIO User Agreement
Cancel
Continue