Hangin' with Moe Chen on Cadillac Mountain and more autumn in Acadia imagery. 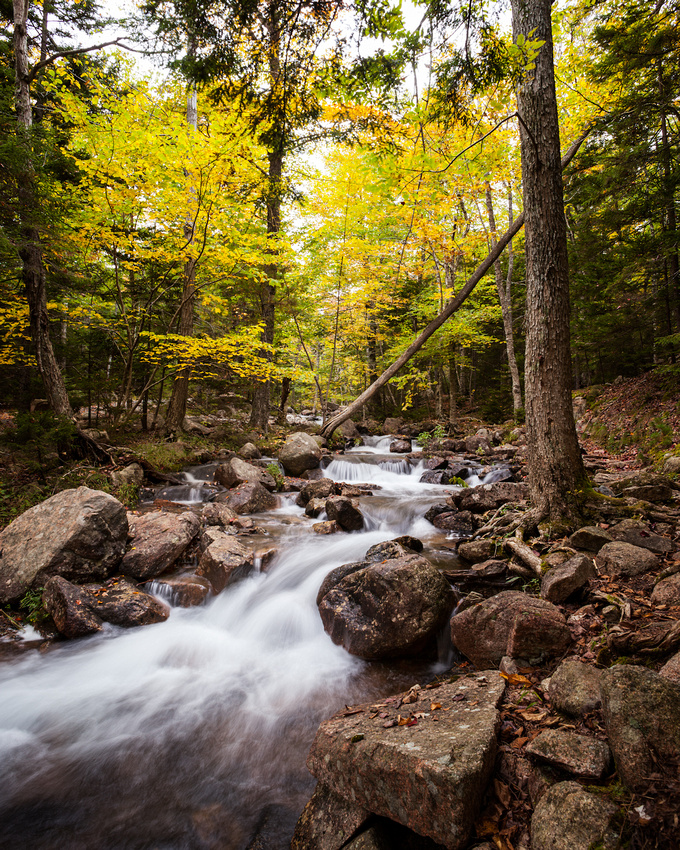 "Jordan Stream Acadia Autumn Color" this is a 3 shot shift-pan done with my 24 f/3.5 Ts-e for a wider perspective.

Right then, where were we? Crazy how sometimes the time just flies! -Anyways a week ago today my pal Moe Chen drove up from Portland to do some shooting in Acadia and I hooked up with him around 10 am cause I wanted to be lazy and slow that morning- he got a proper start at 04:00 and arrived on the island that was just about to get to peak foliage color and a forecast of overcast with a good chance of light rain. Moe wanted to shoot some running brooks and I was trying to explain to him how absolutely ripping the streams were 4 days earlier but it hadn't rained since then so things had calmed down quite a bit. So here was my approach that day- I never shoot with other people if I'm trying to make "serious work"- maybe it's because I generally don't hang out with other photographers, but it's probably more that I'm just trying to concentrate and focus and find the compositions etc= yeah right, I just like to hang out by myself in the woods! But I've known Moe Chen on the worlds webwild internets for a couple few years now, found him on Flickr back in the day, and always really love his work and wanted to kind of just talk shop about being a Maine landscape shooter and stuff. Here's some quick background about Moe- first thing is he's a Nikon shooter, which is cool but they mount their lenses backwards and the focus ring goes in the opposite direction, and there are no red rings so I'm always kind of unsure if it's a wicked sweet lens or not- but these are just personal hang-ups of mine that I need to come to grips with and I shouldn't blame Moe for that :-) Moe shoots D800, which is awesome cause I've seen the proof of the detail that is possible with those cams and he packs the Nikon holy trinity of glass to use on it (14-24, 24-70, 70-200) and I've since then done some more research on that 14-24 and am now convinced that it is the ultimate wide angle landscape lens (except for the filter mounting options which apparently poses some challenges but isn't impossible). So some day I'm gonna have to add one of those and an adaptor to my Canon 5D2. More about Moe: he's my age, he's got some tats which is all urban and cool, his profile pic is a sweet looking dog, he's got enough kids to stock a small classroom, he's got The Best Old Orchard Beach pier shot that I've seen, and he's generally just a nice guy. http://moechenphotography.com/ and here's the OOB Pier shot-

We hit it around 10:00 at Jordan Pond and walked down the Jordan Stream looking for stuff to shoot. The first thing I did on this shoot was manage to submerge my Canon TC-80N3 in the brook before I had even fired off one shot. It was unresponsive and I felt like a schmuck and was all bummed out and depressed for a few minutes thinking that I had wrecked it for good, took the battery out and after an overnight dry in front of the heater it's back to normal but that was a fright- So you see, that's what I'm talking about, I have a comprehensive checklist of considerations that go into making a photograph and distractedly babbling away about aftermarket off camera evf's or something or other I almost wrecked some gear! Back to the stream- I had gotten some pretty good shots of the waterfalls and some autumn leaves stuff a few days earlier http://nateparkerphotography.com/blog/2012/10/acadia-waterfall-walk so I had the sort of sense of satisfaction of feeling like I "had something in the can" for a while- so it was all targets of opportunity that I was looking for or maybe some more detail scenes. I was letting Moe make all the decisions for a shooting itinerary and was just like tagging along- but in Acadia you just can't go wrong, there's always a beautiful composition somewhere. So we started by just making some simple autumn brook imagery and the stream was actually running pretty nicely, there wasn't an abundance of hardwood tree color but there were touches of fall all around. 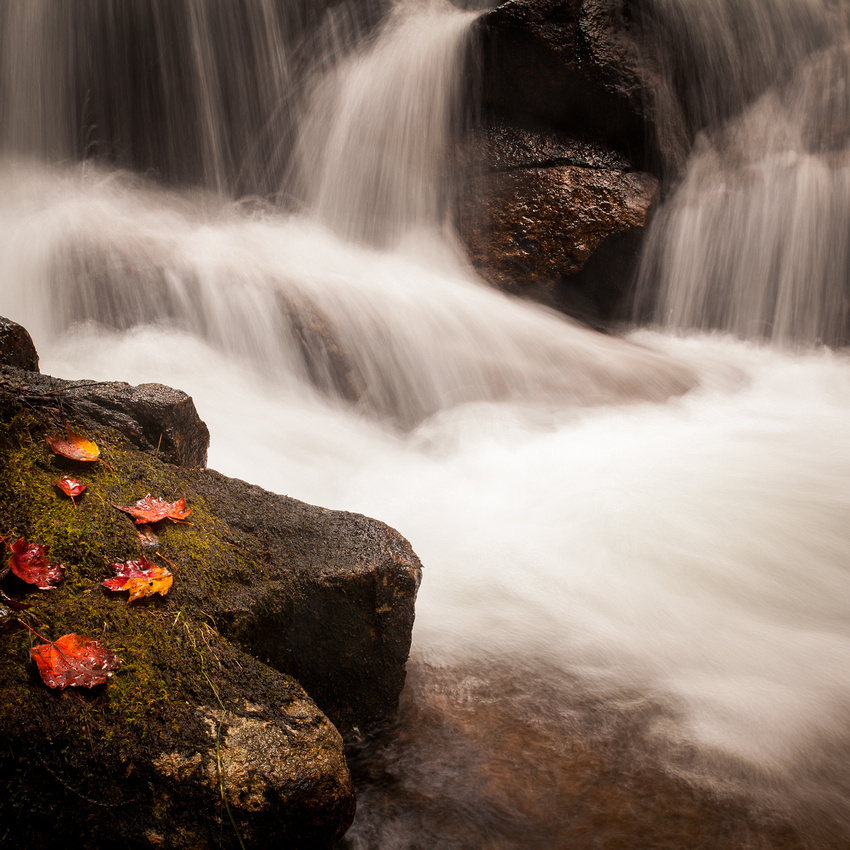 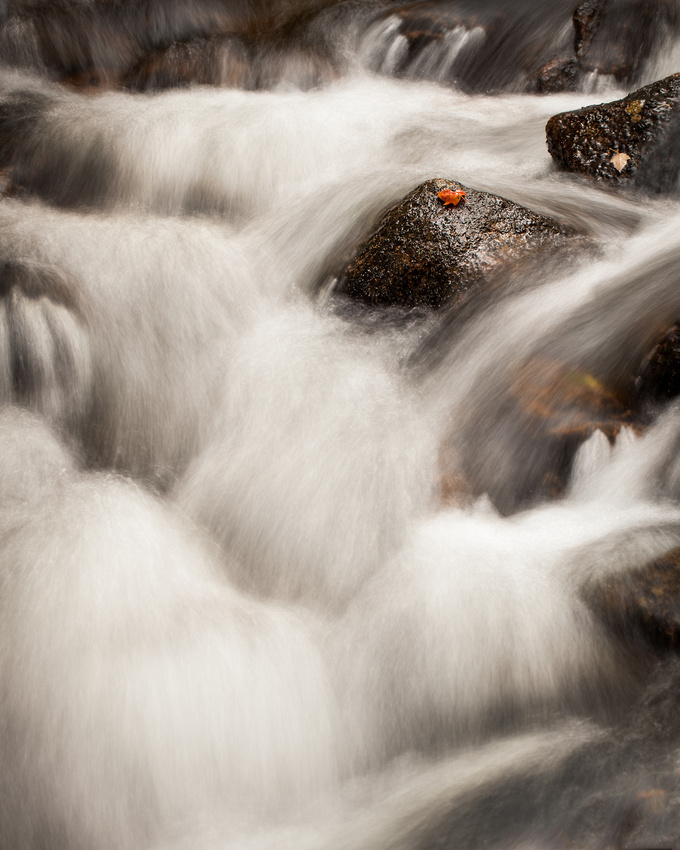 About 3/4's of a mile or so along the stream there is a beautiful carriage trail bridge made of cobblestones that crosses the brook and we geeked out there for a half hour or so as there were a bunch of nice comps to be had there. Details and textures galore. At this point Moe made me feel a little better and a little more human after he dropped his cable release in the brook and it almost floated away before he grabbed it- so now the two of us had equipment issues from dumb fumbling. Crazy! 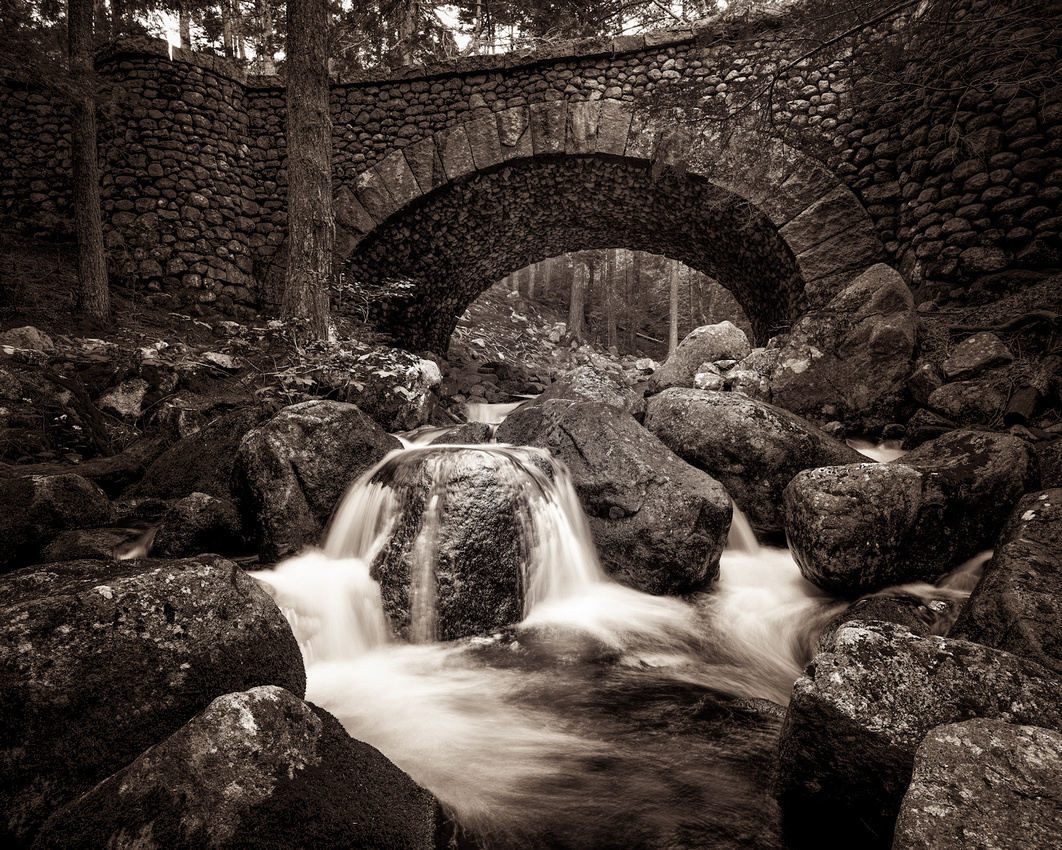 From here we headed back to the vehicles to move on, and check some other locations on the way to Cadillac Mountain where Moe suggested we go look for some blueberry foliage color which can be wicked nice this time of year- and that was a good idea I thought because I haven't been up there since back in June- I often skip the Cadillac summit in favor of other less crowded spots in the park, for instance when we got there around 1:30 pm the place was packed! There were probably nearly a hundred+ cars up there in the 2 different parking lots, buses were backing and parking and beeping, literally streams of people were framing scenes through lcd's and stumbling around (not trying to be cocky- everybody stumbles around when you are walking on uneven granite)- so we headed down the south ridge aways to find some scenes.

Moe was cursing the place at the time about how compositionally challenging it was up there. And I definitely agree. We both took two different approaches where I went handheld on the 24 and tried to shoot a lot where Moe was being more deliberate and shooting off sticks- and at the time I was guessing that he was going to get all the shots and I was filling up my card with "snapshots". But I thought it was great compositional practice, like I said earlier- I had made a couple pictures that week that I was pretty happy with so anything else at this point would just be a bonus. This is what we saw and had to work with- there was a fairly flat and featureless sky for the most part, there were rows and clumps of blueberry foliage interspersed with granite and lichen and scrubby spruce trees and occasional spots of mini flaming maples. Essentially the wide angle scene was chaos, like nature usually is, so compositionally we were looking for patterns and motifs, so the images that I ended up liking were ones looking down. And now after reviewing what I got that afternoon I kind of feel like going back and shooting off a tripod and redoing the ones that had focus fall off or other handheld problems. Also at the time because I was hanging with an D800 shooter I think I might have been suffering from an irrational camera envy and limited my iso's to 320-400, which is silly because I could have very easily have doubled my depth of field without problems- just another symptom of losing my focus. 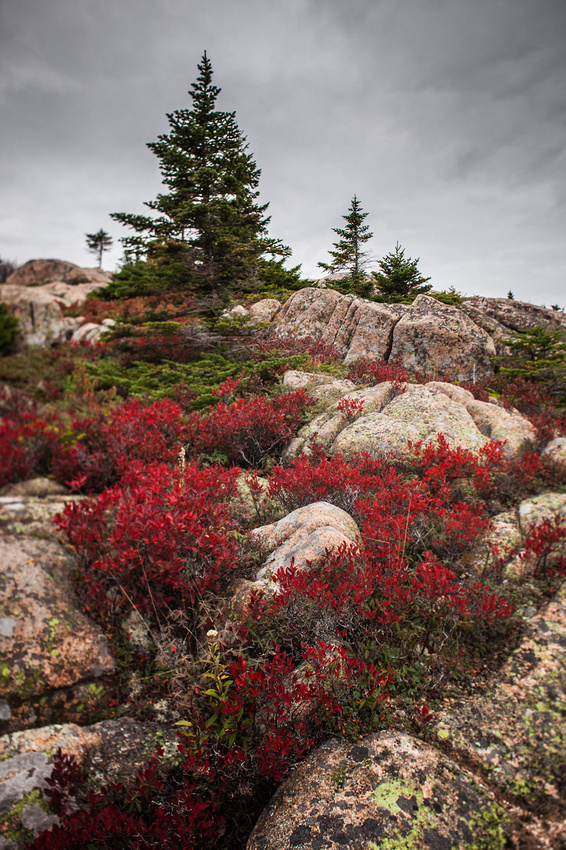 Blueberry Foliage and Granite and Spruce in Acadia 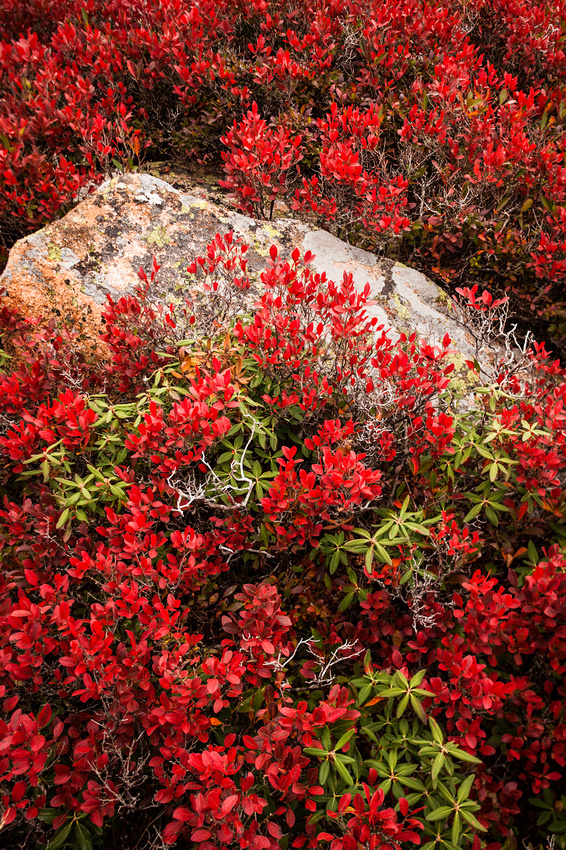 That's it for now- time to get back out and find some more leaves before they get blown to smithereens next week- have a good one and thanks for stopping by, -Nate!

Moe Chen setting up a shot on Cadillac Mountain.

Moe Chen(non-registered)
Ha dude. First time I saw this post somehow. Thanks for the comments and you definitely got some better comps than I did. Makes me want to revisit my shots though and take another look.
Kevin D(non-registered)
Great close ups on the water. (Visiting Camden this past week, there has been a fair amount of clouds and rain, which was not quite what I had hoped for ... but seeing your Jordan stream shots, I am thinking that I should have found a stream to photograph.)
And I know the color in the trees has been a bit underwhelming, but you solved that also with great color of the blueberry leaves. Very nice.
David Patterson(non-registered)
I love Cadillac in the fall... those reds are awesome, especially on a wet and foggy day. Nicely done indeed.
Tom Whitney(non-registered)
Great shots Nate. I love the red blueberry bushes. The first one, with the spruce, is awesome!
No comments posted.
Loading...
Subscribe
RSS
Recent Posts
Update Summer 2015 iPhone beat me at my own game- Dream Job: Photographing a Lexus ad in the deep of winter in Maine Update: got married, shooting flash, and snow on the ground. The 26 hour day- Triptychs and diptychs oh my! On maintaining creative momentum, or How I learned to stop worrying and love the process Revisiting old processes reaching for new results. Cape Cod before's and after's's's's... On Breaking the Rules= Don't Always Show Your Best Work?
Keywords
maine acadia national park photography have a nice day nate parker photography black and white acadia national park acadia bar harbor maine photography canon
Archive
January February March April May June July August September October November December
© Nate Parker Photography
Powered by ZENFOLIO User Agreement
Cancel
Continue