Some of my favorite images from NYC where I missed the focus? 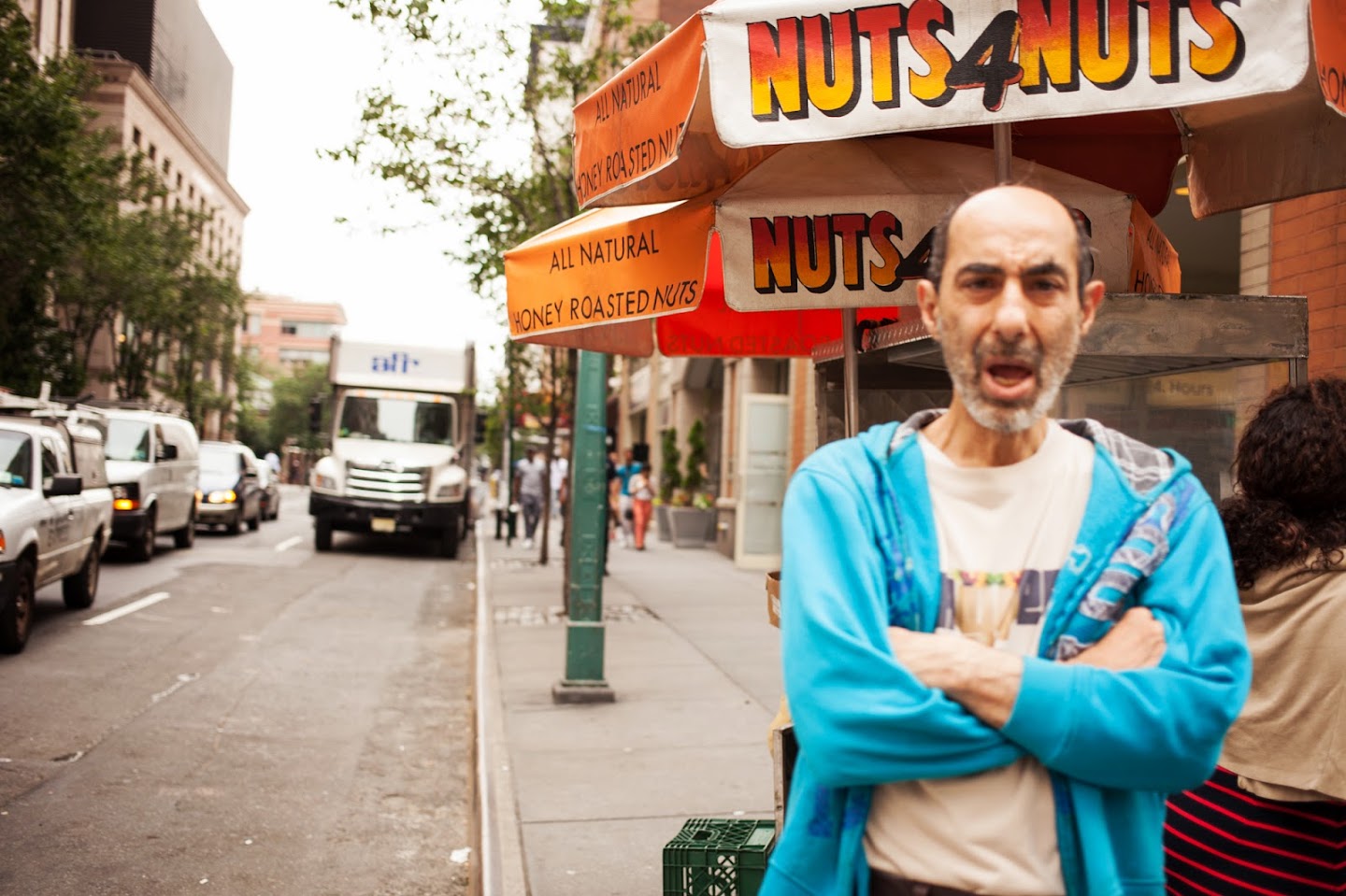 Focus is over rated!

Heheh. See, usually I take great pains to get the best focus as possible. I use a heavy tripod- magnify 10x loupe in Live View, consider hyperfocal and circle of confusion depth, use a shutter release etc, but that's not on the street. I consider street photography kind of like a sport. A sport that I do poorly but keep showing up for in my cut-off sweats with a bandana on clapping my hands together saying "allright let's go guys!" But then miss the jump shot like a dweeb. 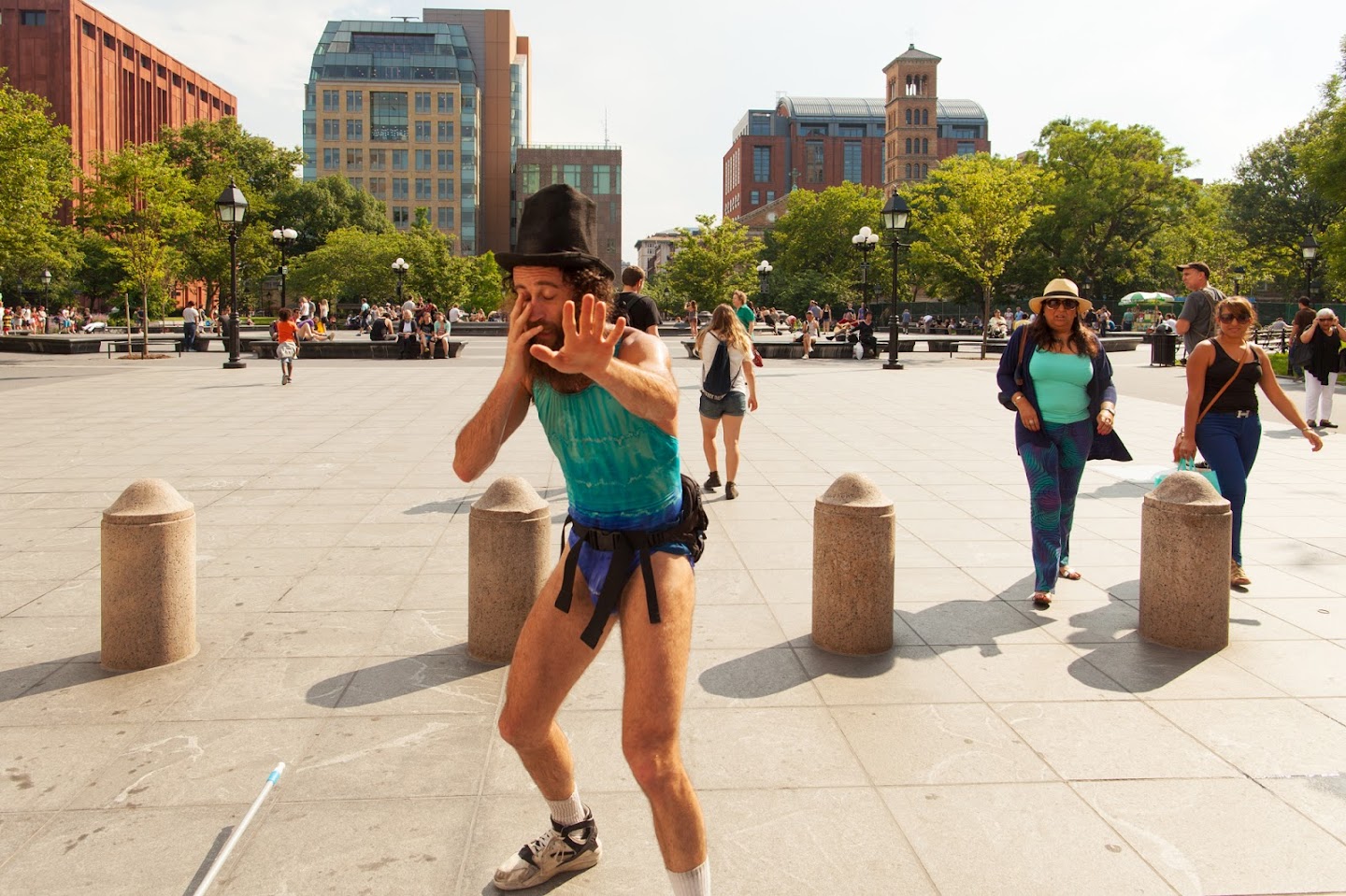 Washington Square Park weirdo- it's funny: I was talking to my buddy who I was supposed to meet in an hour or so on the phone while walking through the park with my other buddy Larson and we'd been photographing since midtown- saw this guy and shifted the phone top my left hand and got as close as I could bear to him with the 24mm on. Then he starts reeling around and shouting "oh my gawd: he's taking pictures and talking on the phone, oh my gawd-" so that cracked me up pretty good. Here I missed the focus on the first shot of the series where even though it's a super long depth of field, the ladies walking towards us on the right are tack and the weirdo is just a little soft.

But I got my own rebound and it was sharp here: 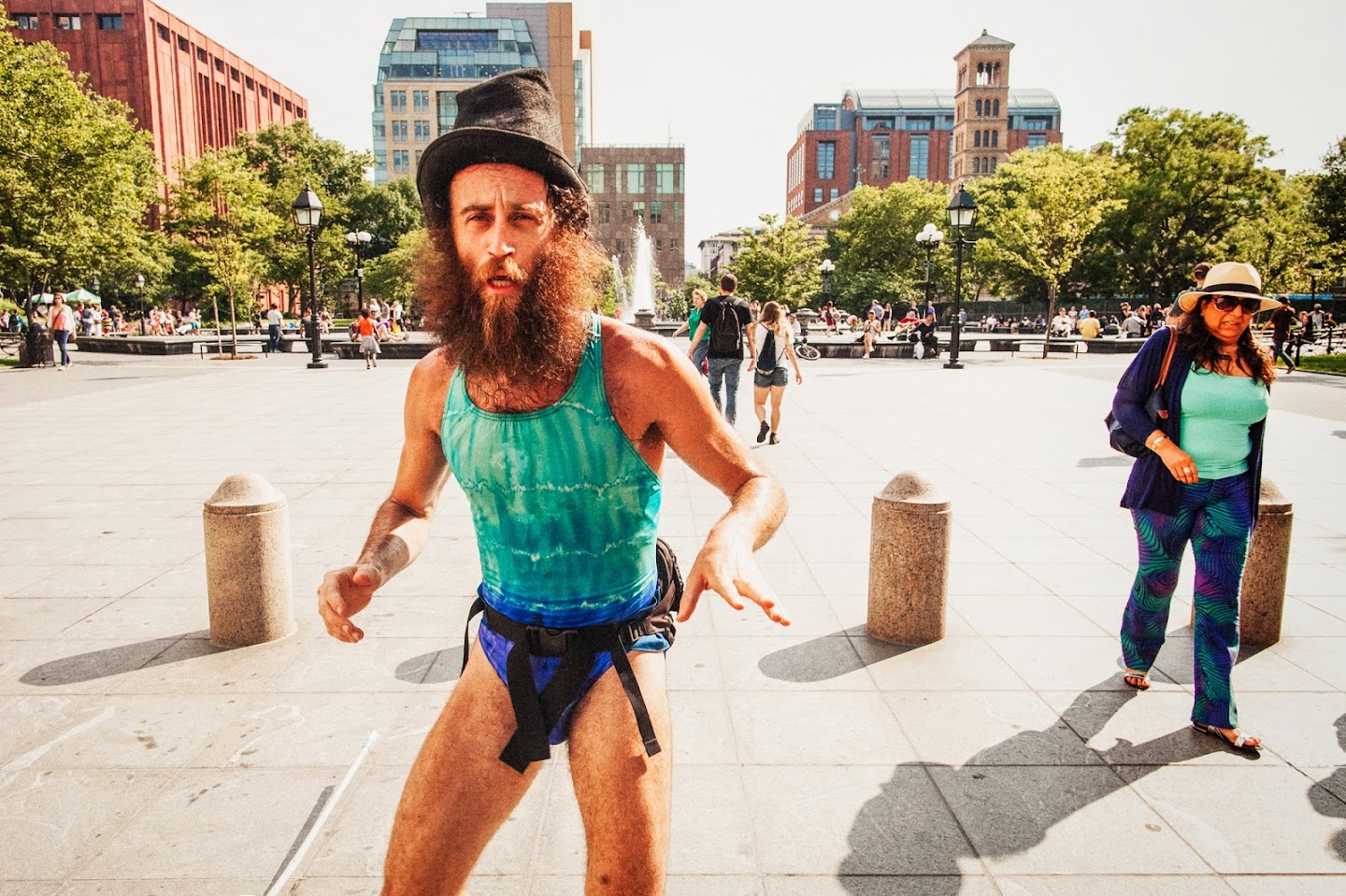 Here's some tech talk for the camera nerds: I was shooting on a Canon 5D MKII with either a 50 or a 24 or a 40mm lens. I had my camera set up to Tv mode (time value/ shutter priority) at 1/160th of a sec and auto iso so I could completely focus on experiencing and trying to see and not get run over or inadvertently do something exceedingly touristy. I had my autofocus set to single shot with only the central focus point (the only cross-type point on the 5DII). So my modus of operandi like was to focus and recompose, real quick like. So that only worked to a point. Because that cameras autofocus system is only so good, which is to say mediocre at best (I use it for landscapes and that's why I got it), you have to obviously consider focusing strategy to work street photography well it would seem. From my recent experiences down there doing that I would next try 1.: using AI Servo autofocus because so many times a photograph is walking down the sidewalk towards you approaching at a closing speed of a respectable NY 9 miles an hour or so- so, unless you're at f/16 on a really wide lens the subject will go soft between focus confirmation and shutter release. Also I shoot back button focus, which can't be helping anything in fast moving environments because it has to be at least a nanosecond or so slower than shutter button focusing, but I like the back button. 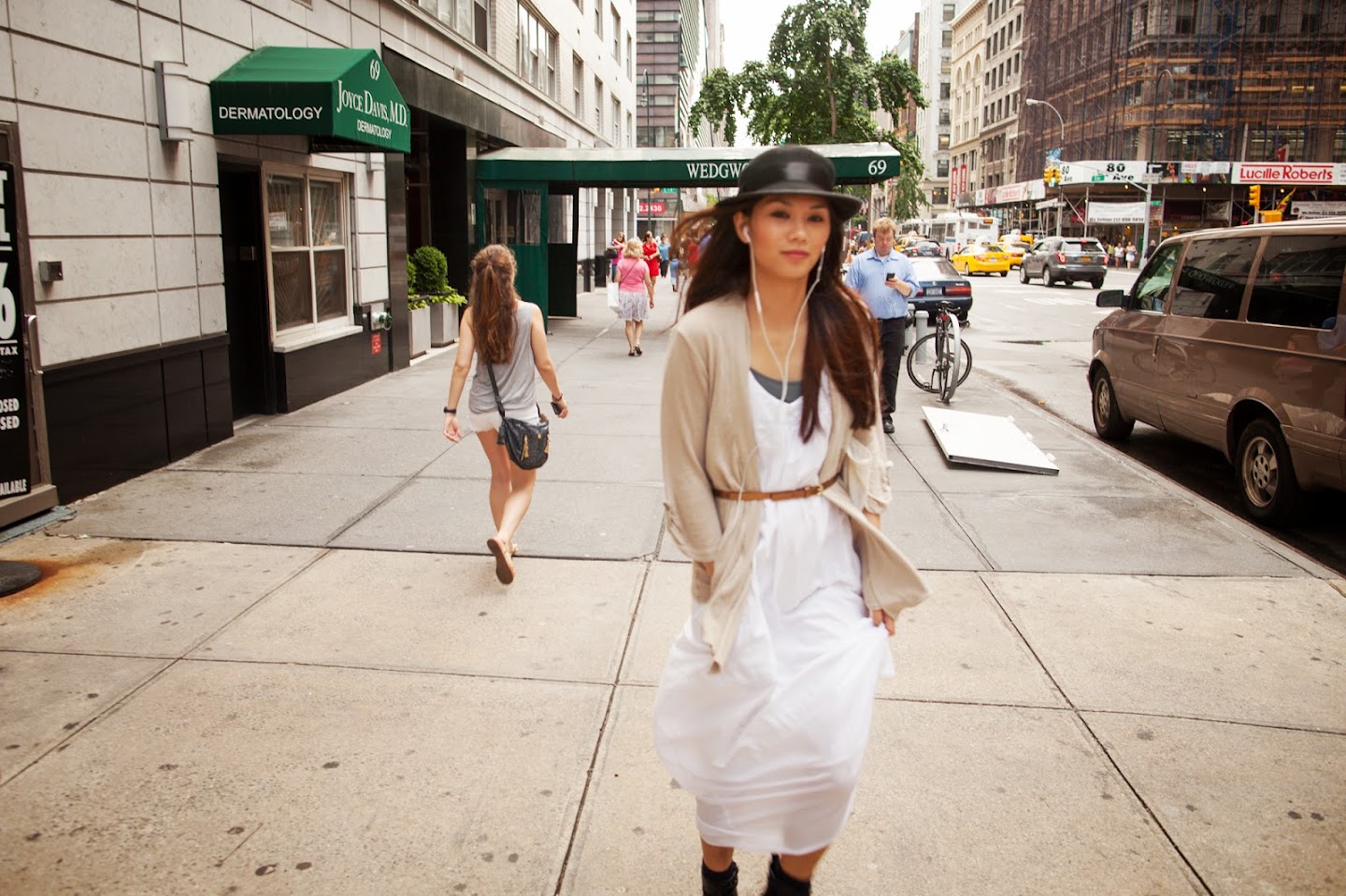 She's soft but the dumb background signs are sharp- and I love that cool confident attitude that says: "yeah, take my picture!" (don't read anything into that line Sophie, sweetie- I'm just talking about photography here! :-) )

The 2nd. thing I would go with in the future regarding better street focusing is manual. I feel pretty comfortable focusing manually and there's just something to be said about taking the guess work out of the thing where if the machine fails you that half second will never come back to try again, but manually focusing if you miss just a little bit I'm gonna call it still good. See, again this is just a reference to the 5DII's autofocus system- I know the 5DIII has a rockin' good auto system, but the 2's- no. I don't trust the matrix system in a situation like this, so otherwise it's pick a point or go manual. Which brings up point #3- 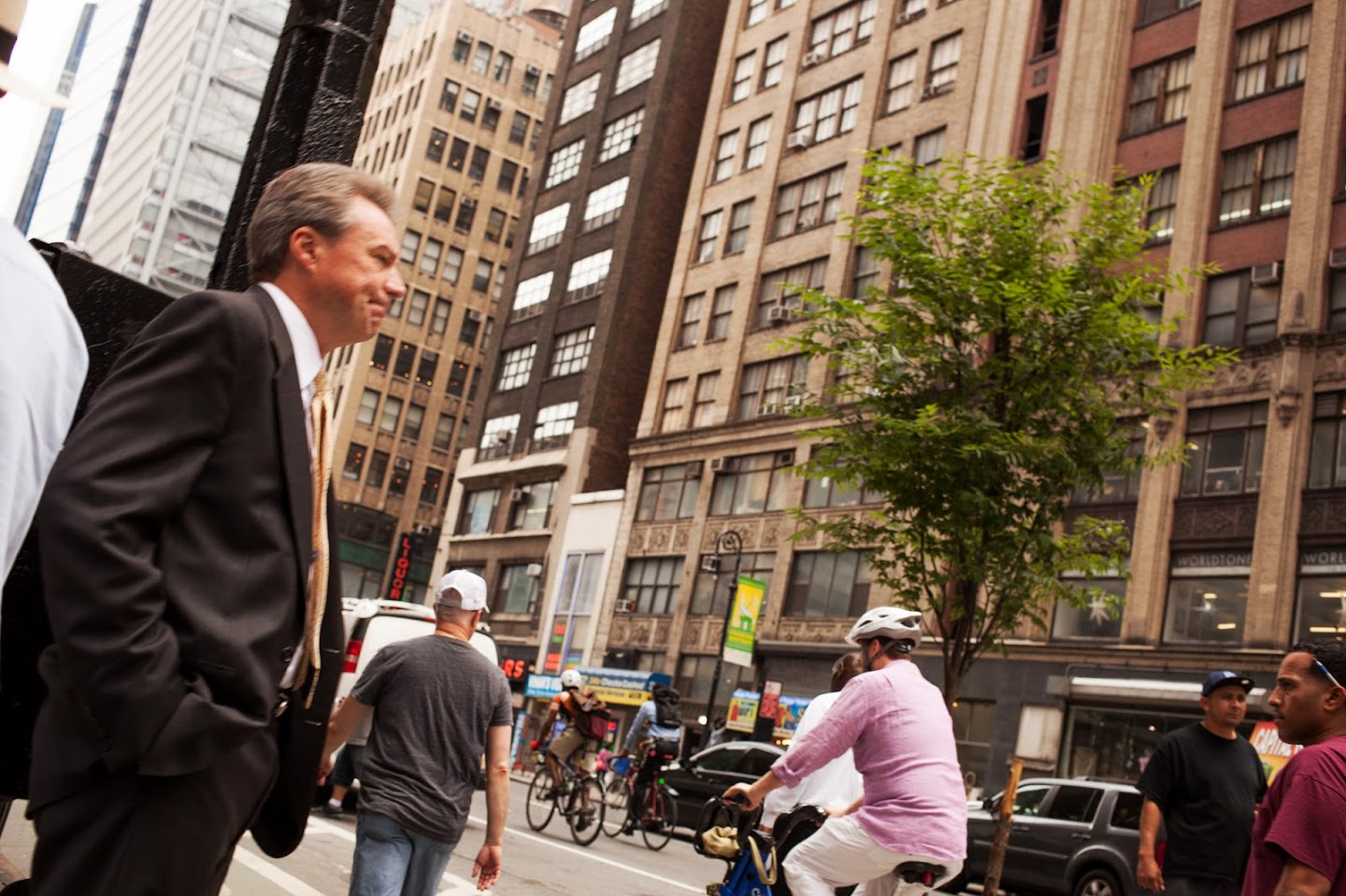 This was from the hip- made the exposure just hanging the camera around my neck. I like the picture for the guy in the suit all making the stressed out pinchy face of a businessman in Manhattan backed by the high rises and windows of sixth avenue. But he's just a little too soft. Not to mention that phone booth or sign or whatever making bat wings coming out of his back, but I like the feel.

Point #3 in our tech talk regarding street photography focusing strategies: camping with a prefocused distance set waiting for something to happen. Let's say you find something in the environment that is just too crazy and amazing but you need something else, being a person of interesting variety, to make it whole. so you camp there with your focus set and wait for it to come together- but that has never worked for me. First of all that seems like it's cheating and too contrived- for me at least, or maybe I just never had the patience or foresight to pull it off correctly. Second of all unless it's just an amazing stage that you're building here with this wonderful background that is waiting to be transformed into the ultimate expression of contemporary society, you could be missing something better and more real and unfolding right now right around the corner? But for an autofocus system like mine perhaps I would be better suited to that kind of photo-trapping approach. Bah, just kidding. I'm going to go manual next time. 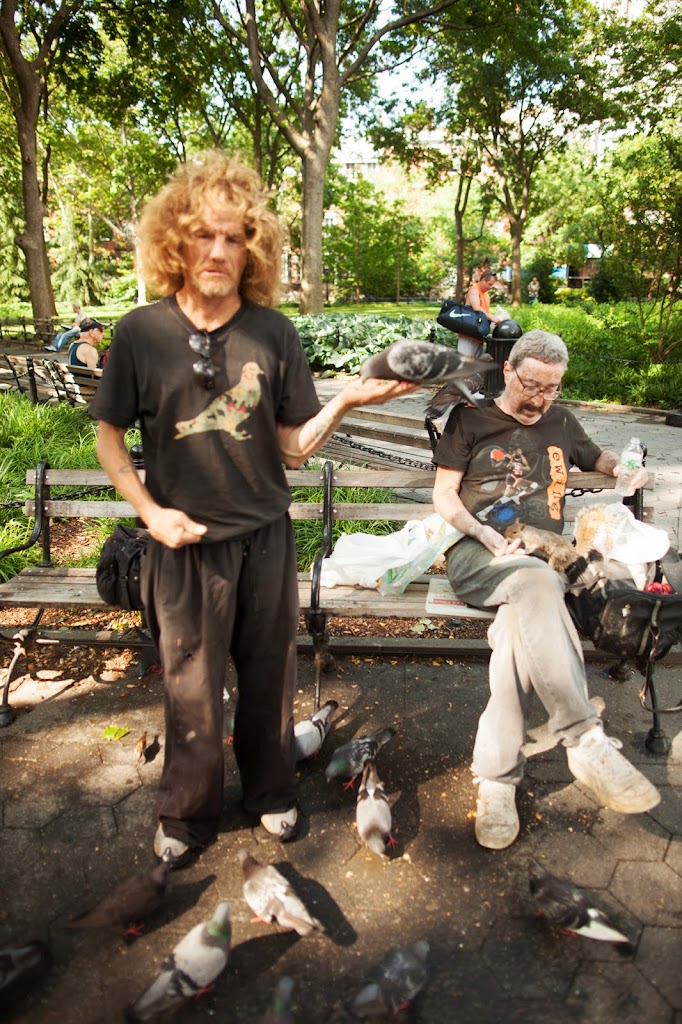 Larry and Paul the bird guys- I don't know how I screwed up the focus on the one- which is where relying on technology get's you!

but I photographed it again because I had a feeling that I should, also I was refraining from chimping for about 90 percent of the time down there, just trying to keep my head in the moment. 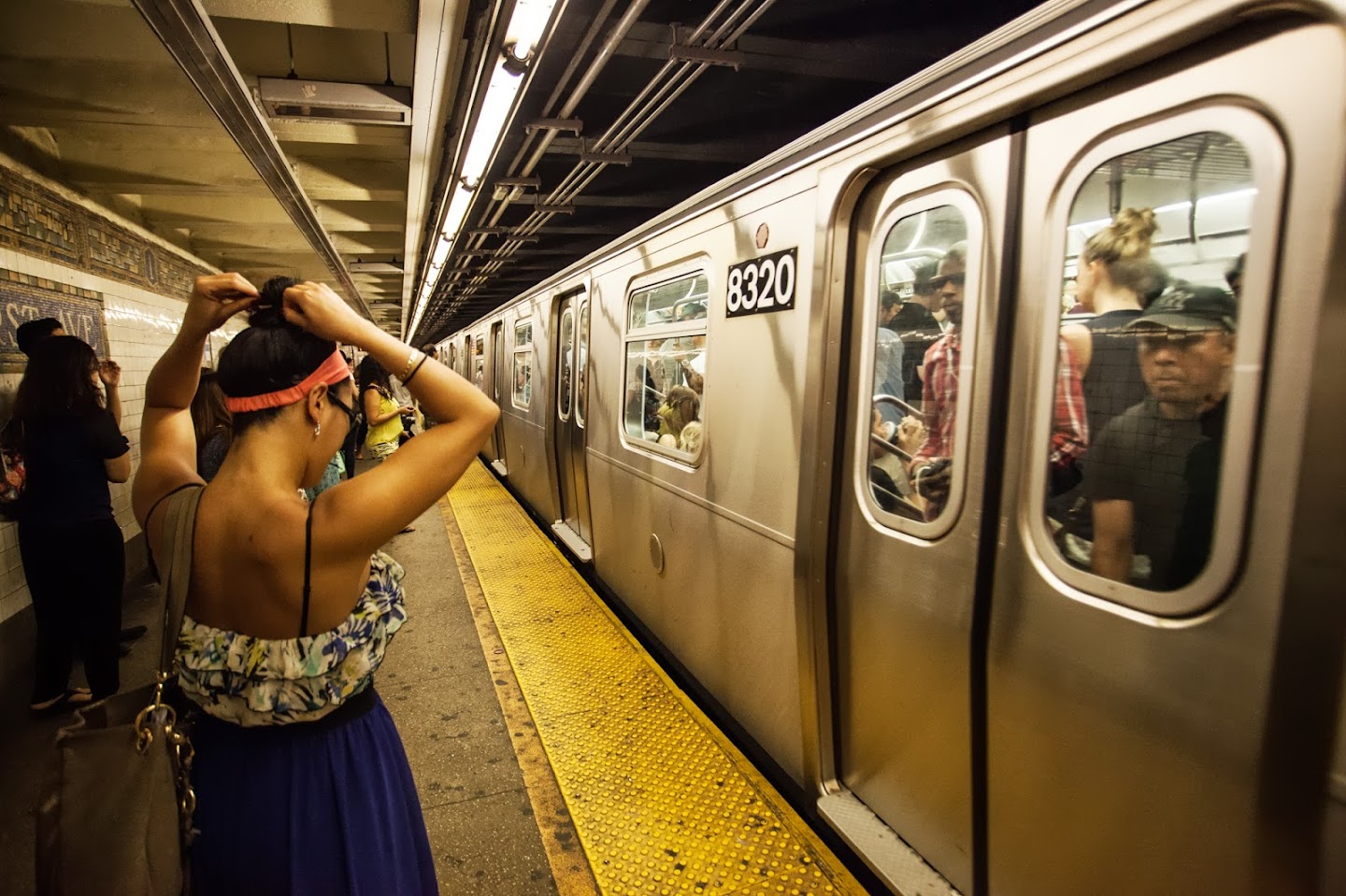 I like this one because of the guys ogling the lady from the train. I was focusing on the train rolling into the station and the people in the windows when this lady in front of me started adjusting her hair- I remember feeling that I wanted the image to be about the people in the train and not about her. But I wish the guys in the window were sharper than she is- here though it's more of a case of shutter speed making the guys a little bit softer in focus than missed focus.

And my last point here is: focus is over rated. Other than the image of the lady walking down the street in the white dress with the headphones and hat on being soft and the horrible signs totally sharp behind her- all of the other images could be interpreted as being sufficiently sharp just in a place other than I had intended, but the viewer could never know otherwise? A happy accident like. So therefore focus and the intent of the focus is a personal and interpretive thing- but to me if it's not where I wanted it, it's just a lie or a failure. But that's just me.

Any thoughts? Have a good one everybody- Nate!

red boost reviews(non-registered)
i have read all the remarks and hints posted through the traffic for this newsletter are very best,we will anticipate your subsequent article so only.thanks!
ocurpime reviews(non-registered)
Pretty good post. I just stumbled upon your blog and wanted to say that I have really enjoyed reading your blog posts. Any way I'll be subscribing to your feed and I hope you post again soon. Big thanks for the useful info.
glucotrust(non-registered)
I think this is an informative post and it is very useful and knowledgeable. therefore, I would like to thank you for the efforts you have made in writing this article.
nomad security camera(non-registered)
Nice post! This is a very nice blog that I will definitively come back to more times this year! Thanks for informative post.
kerassentials(non-registered)
this is really nice to read..informative post is very good to read..thanks a lot!
No comments posted.
Loading...
Subscribe
RSS
Recent Posts
Update Summer 2015 iPhone beat me at my own game- Dream Job: Photographing a Lexus ad in the deep of winter in Maine Update: got married, shooting flash, and snow on the ground. The 26 hour day- Triptychs and diptychs oh my! On maintaining creative momentum, or How I learned to stop worrying and love the process Revisiting old processes reaching for new results. Cape Cod before's and after's's's's... On Breaking the Rules= Don't Always Show Your Best Work?
Keywords
maine acadia national park photography have a nice day nate parker photography black and white acadia national park acadia bar harbor maine photography canon
Archive
January February March April May June July August September October November December
© Nate Parker Photography
Powered by ZENFOLIO User Agreement
Cancel
Continue