Dawn Light on the Beehive

Dawn Light on the Beehive

Dawn Light on the Beehive.

Last week in the middle of the heat wave that seemed to have been going on for ten days or more, I wanted to go make a sunrise image over at Sand Beach that felt hot like that the day was going to. On summer mornings over on the east side of the island, high pressure heat wave systems often make for really pretty pink high clouds with orange and cerulean contrasts and I've made those kinds of images before over there, but usually in August. I didn't really have any particular image in mind heading over there at 04:00 in the morning for a 05:15 sunrise, I was thinking of seascapes though and figured to frame "Great Head" in the distance against the shore of the beach and hope for some nice colorful clouds to come along. I guess, come to think of it, I was considering almost certainly making a color image that morning even though at the time I wouldn't have attested to it, it was just there in the background of the mind and no matter what I would have found that motivation sooner or later. Also black and white always works best for me on cloudier, stormier, and more overcast days and this was setting up to be a real typical dog-days-of-summer, humid and steamy, colorful kind of morning. Got there with plenty of time to spare in order to set up the kit not frantically in the parking lot and check to make sure to inventory all the important stuff= coffee. Set up over on the right side of the beach where the boulders are and made a balanced composition and then started to wait out the light but it became pretty obvious that the real show was going to happen out of my frame to the left/ north and the clouds were already starting to reflect good underlight in that direction so it was agony to wait for the 8 minute exposure to finish up (oh, by the way, as usual I was making long exposures with a B+W nd110 and also a 2 stop soft graduated neutral density filter) and scamper over to a new composition that would include those clouds. After a quarter mile sprint= if you can call it that in big Muck Boots with a 25 pound backpack and tripod and kit over my shoulder with shutter release clanking along and coffee cup carefully not spilling, I set up just in front of the marsh behind Sand Beach facing the Beehive promontory. There was gorgeous wisps of fog rolling over the ridge towards the sun rising and the sparse high clouds were really starting to pick up some gorgeous pink highlights when I made this first test exposure: 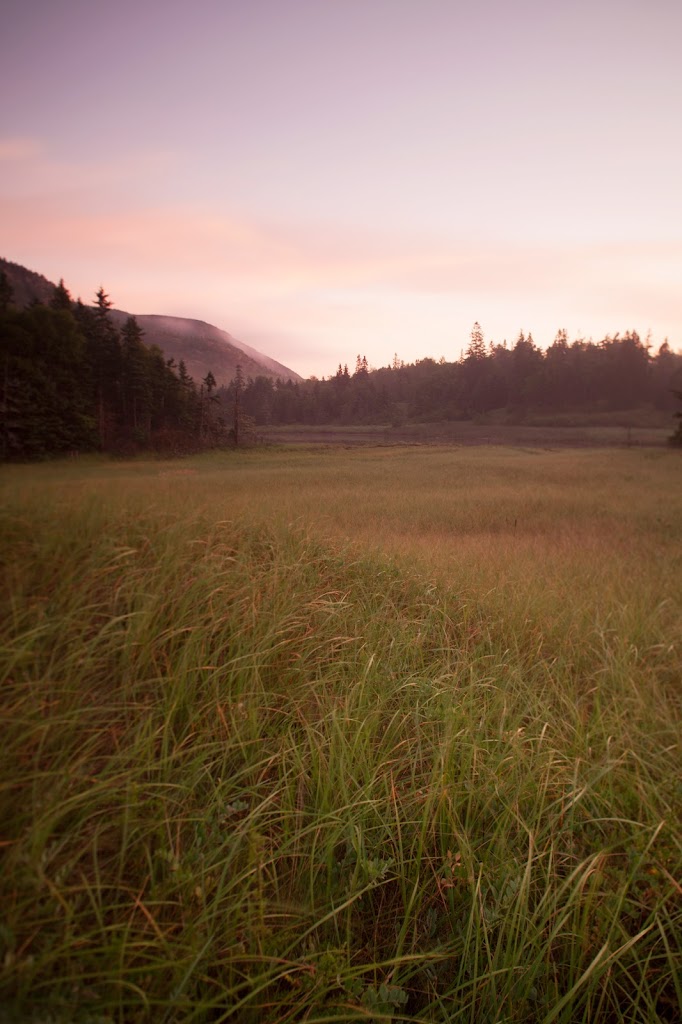 I liked where this was headed- it's an undeveloped raw file of course= a negative that needs developing for contrasts, dodging/burning, sharpening, etc, but I like the warm feel of the sky vs the green of the foreground and the tree line and mountain shapes so- then I saw that 50 yards over to the north was a blooming patch of neat looking meadow flowers that I sprinted again over to. Here the 24mm tilt shift lends itself to one of my most favorite applications of it- making a larger image in a panorama. What's good about this is I can achieve the super wide focal length of about a 14-16mm ultra wide instead of the standard wide of the 24 by shifting the lens three times from side to side or top to bottom (I like to make them as 3 vertical framed shifts from left to right or three normal landscape framed shifts from top to bottom that gives me an equivalent of a standard 4x5 crop vs a really wide and skinny landscape framed shot shifted left to right or a real skinny portrait framed shot shifted top to bottom, but you can do that too. So, in addition to giving you extra wide framing, the "shift-pans" make for 3x the resolution as a normal sized file= it's the equivalent of a 60 or so megapixel capture vs. 20 something megapixels= all the better to print you with! Which is not to say that it doesn't have it's drawbacks, but those weren't a problem here.

Where were we- after another quick sprint 100 yards to the north I set up in front of these meadow flowers and fired off a quick 3 shot vertically framed "shift-pan" ('fired off quick' in long exposure photography terms= about 12 minutes for the three images) and got something like this: 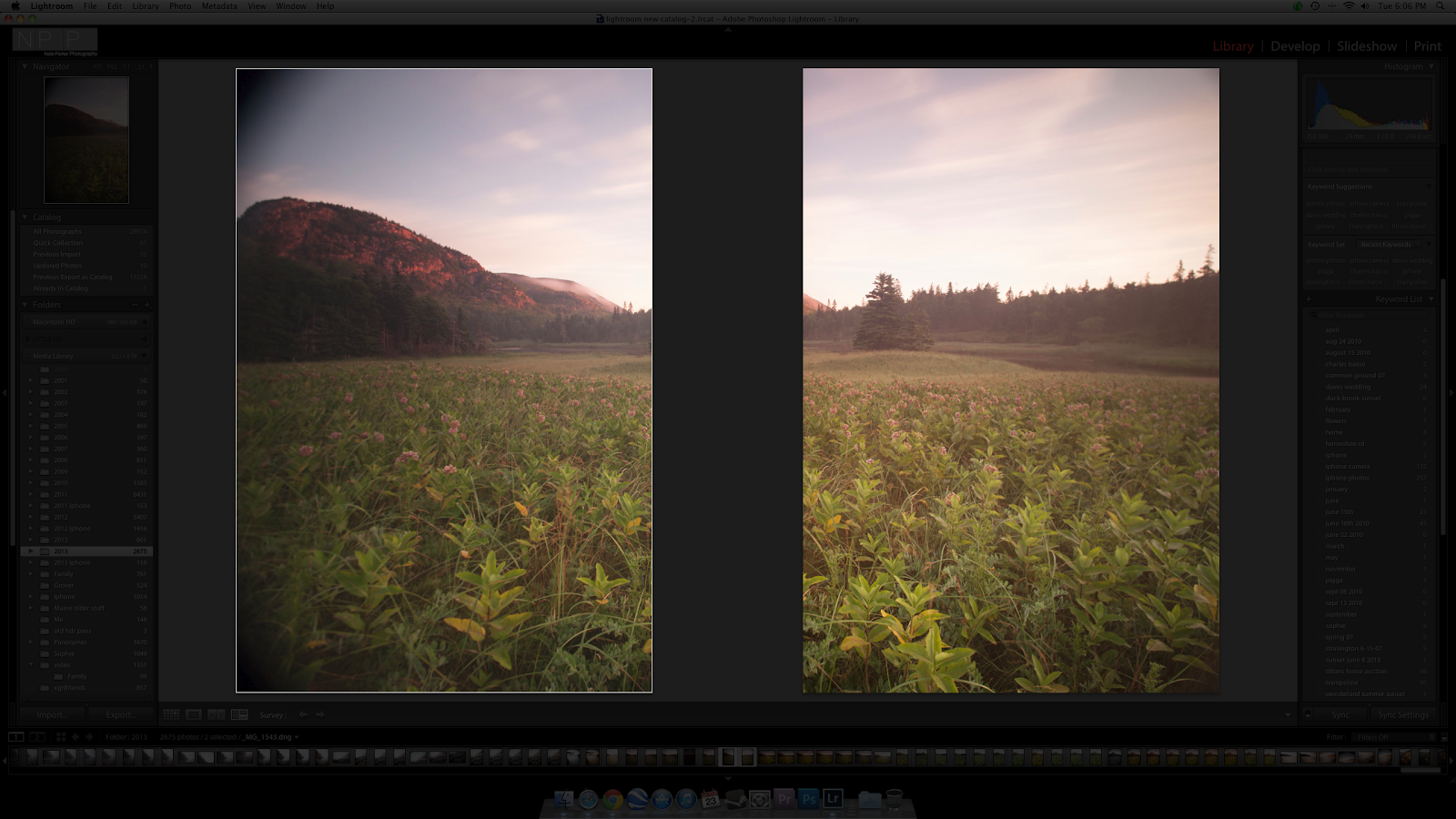 this is just two- but that's all you need to get the gist. I use three cause, just because.

The tourists behind me were totally blowing up with oohs and aaahs, which kind of helped to reinforce for me that this was actually really pretty nice. You can become blind to the beauty that exists around here when you see it often, I'm not saying that I'm guilty of that- it was just additionally moving in some way to hear their reaction to the scene this time, usually it bugs me to no end, but not this time.

So, the raw material becomes= this:

3 raw files stitched in Photoshop CS5- you can see the rough edges and the lens vignetting from being shifted so far to the max on the left. 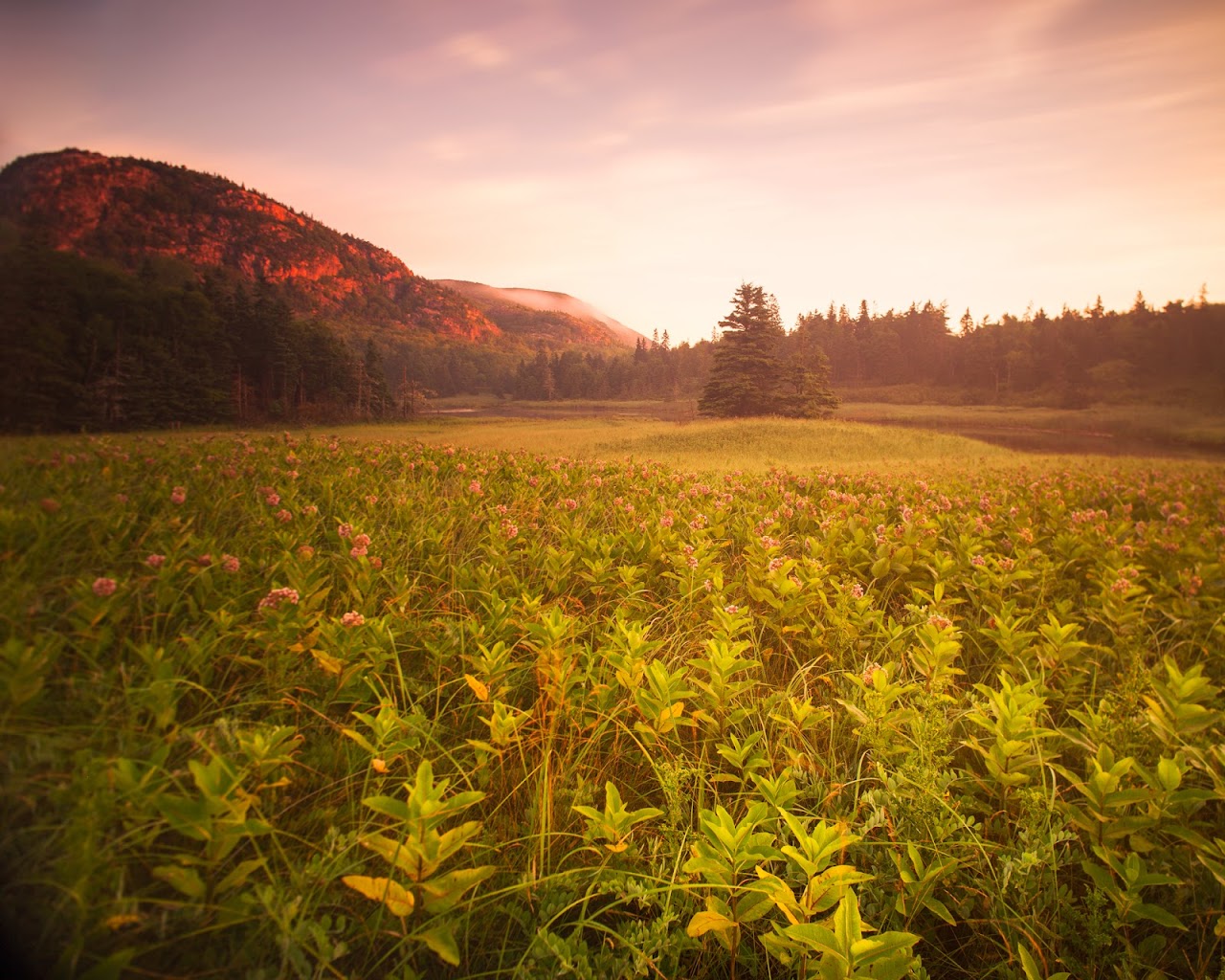 rough stitched image cropped in Lightroom 4 (ya, I'm intending to upgrade next week or so to v.5). Here's pretty much what I did after cropping clean to 4x5: contrast +42, highlights -38, shadows +22, clarity +9, vibrance +18, saturation +4, then a sharpening of 70 and 0.8 radius. I also added a positive exposure adjustment graduated filter in Lr4 to the left side of the image which was burned from lens vignetting, and a negative exposure adjustment graduated filter to the sky to pop the clouds before sending the whole bit over to Nik Color Efex (which I hardly ever use because I usually go straight to Nik Silver Efex for monochrome conversions) first I applied a brilliance/warmth filter for this: 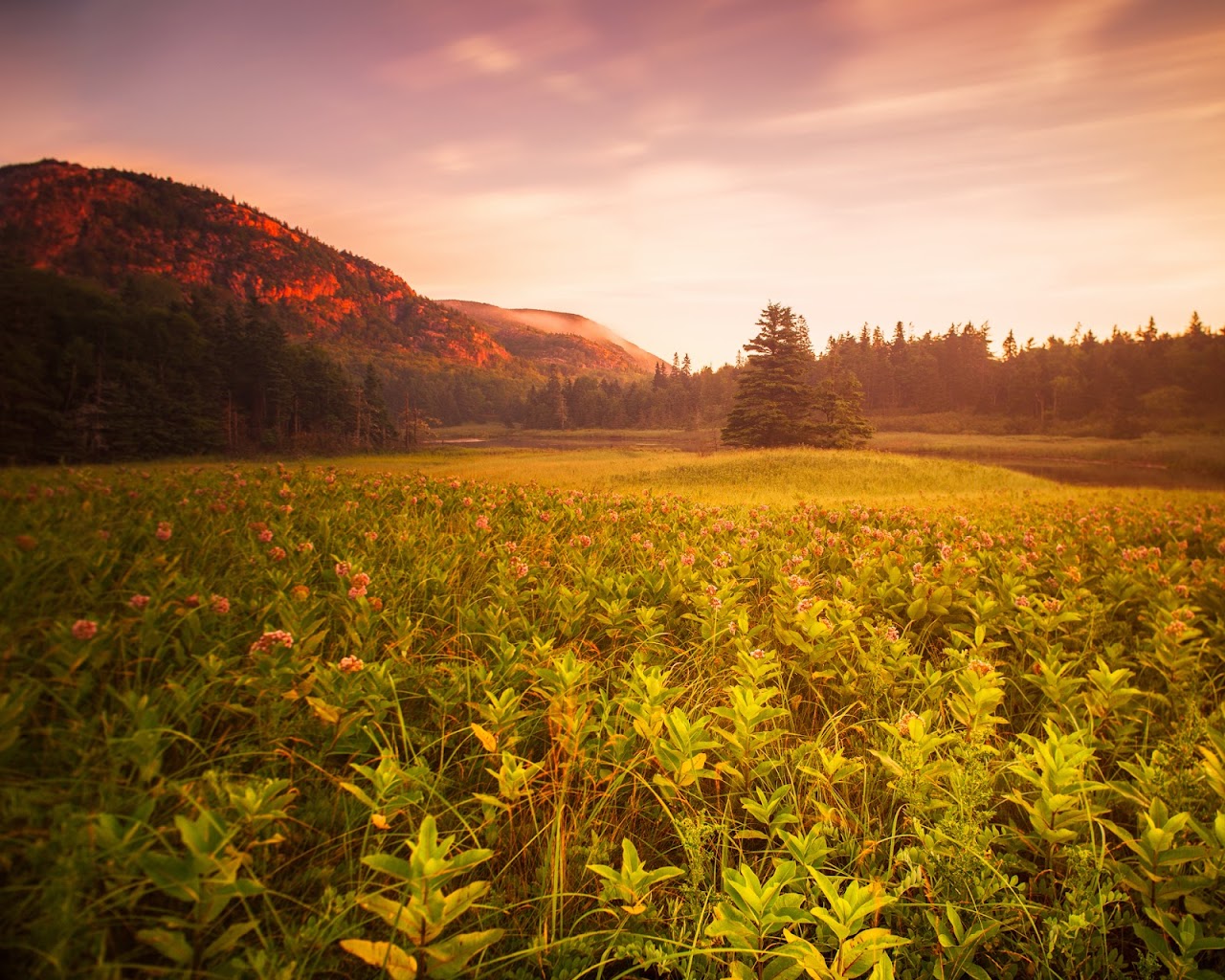 and then I sent the whole kitandkaboodle over to photoshop for dodging and burning with the gradient tool and the d+b brushes for this: 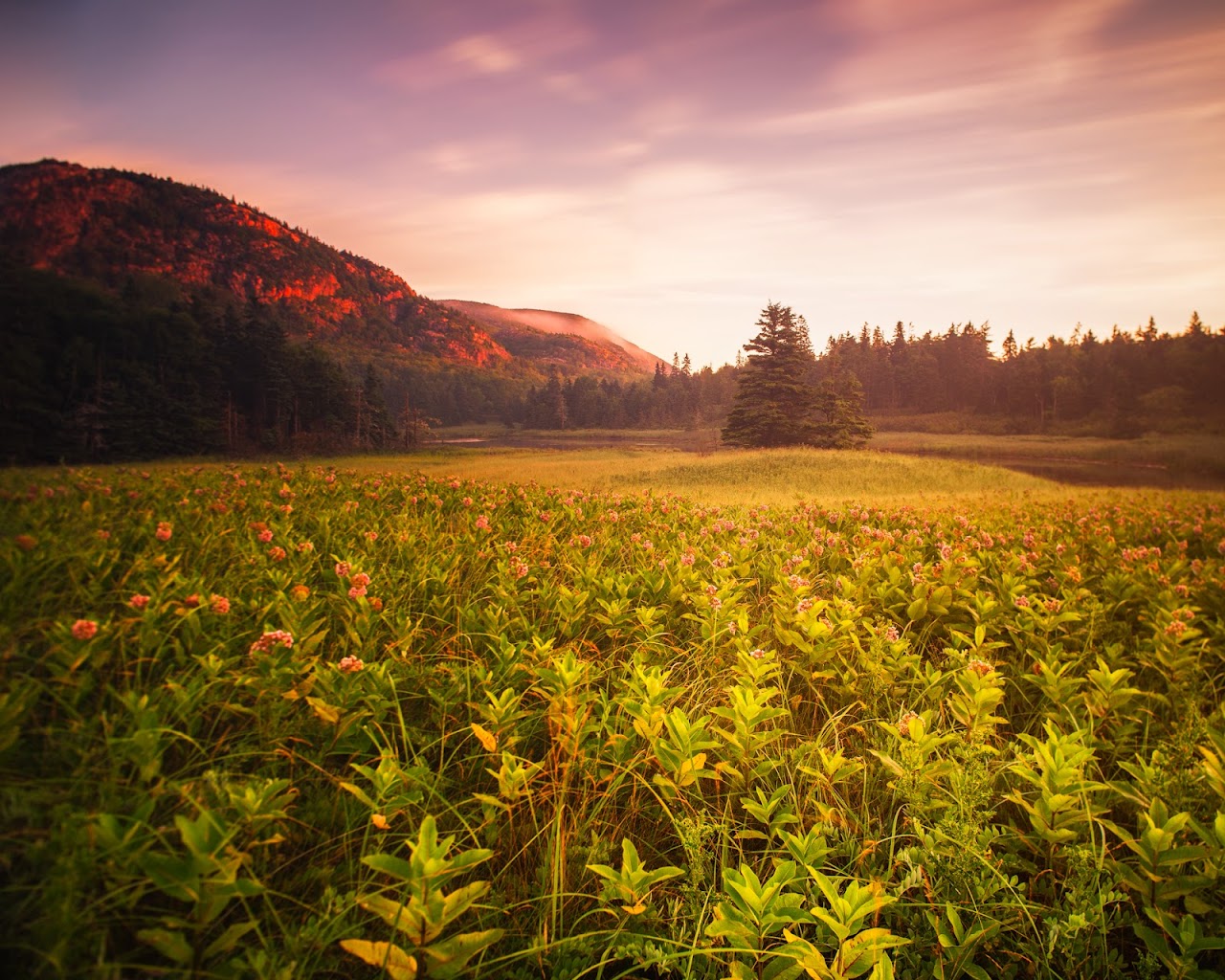 done. And my first favorite color image of the year.

It's definitely not a "straight-out-of-camera" image, but that is a completely ridiculous concept anyways: the camera making the decisions on developing your once in a lifetime image will not always agree with what you want- so I always develop my own photographs. I felt the color choices and approaches I took herein to make this picture were in accordance to the way I felt the scene as. It was hot hot Hot that week, the bugs were murder, I lost my coffee cup int the tall grass three times that very morning just running around with my tripod in a photographic frenzy- but those inconveniences were worth it a thousand times over to be a part of this morning scene here- to borrow an ultimately squeezey cheese word here: it was "magic!"

Right then. That's all for now, and have a good one friendsies. -Nate.