Maine, The Way Life Should Be- Working on a Lobster Boat. 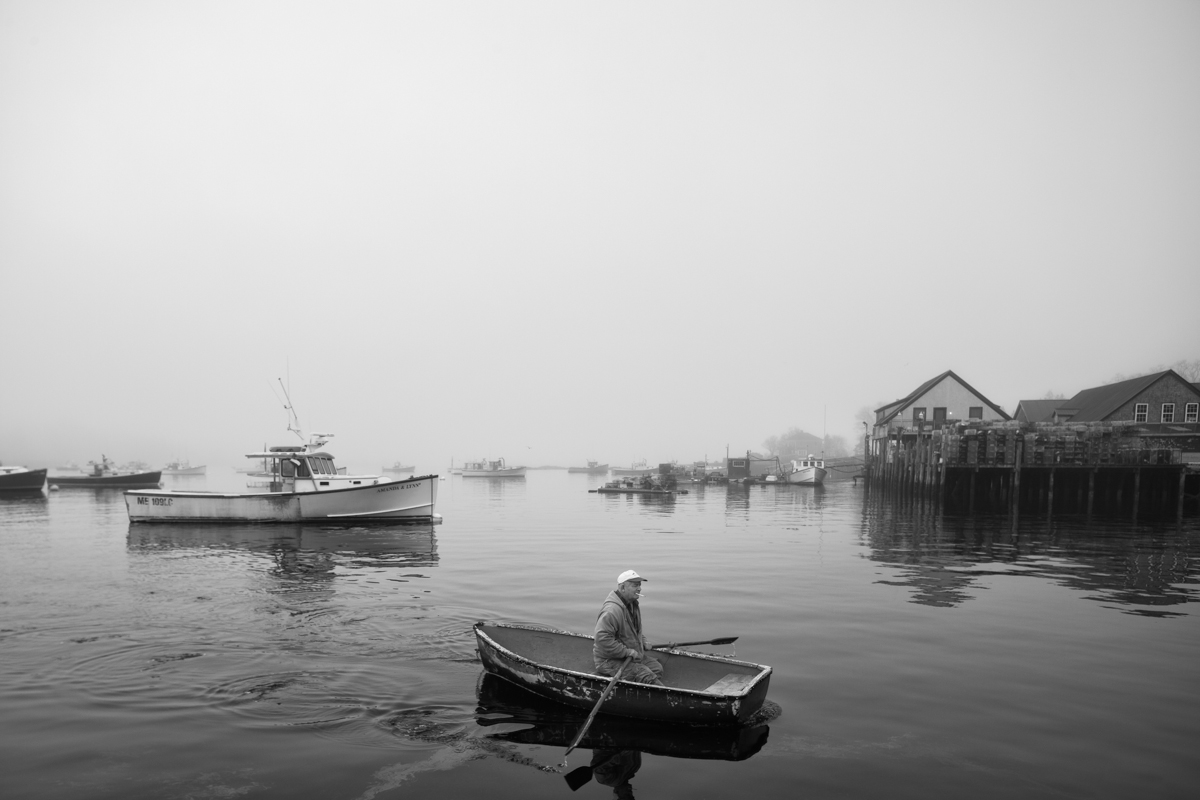 Old Timer Lobsterman. Made this photograph last year, I just needed something to lead off story hour here.

Right then- where were we? Yes, yes I wanted to tell you guys (at least my loyal 10 or 20 or so readers) about my cool new gig- guess what it is? Give up? Well- I'll just tell you: I'm now a Sternman on a lobster boat out of Bass Harbor Maine! Yeah! I'm going lobstering- how crazy is that!>? I know, I know you guys probably thought I was going to say something like: I'm the new L.L. Bean catalog photographer or something :-) ? Ya right, but no, I'm not really a big time pro dog photographer, I just play one on t.v., or the interwebs, or whatever. Actually I make photography because I love it and it's my passion, but it's never been my sole method of supporting myself. I do make a bit of money from making pictures but when you really get down to it, it really doesn't disappoint me that I don't make my living through photography- that way I can keep doing it only for the satisfaction and reward of doing it and not have to confuse passion for profession. At least that's my excuse! So I have to work other jobs to buy gear and pay bills.

Here's how I ended up here- not the long story that goes: my mother met my father in Brooklyn N.Y. in 1947... but the short one where: as of January of this year I was supposedly hired on to an awesome photography job that involved lots of traveling through the late spring and summer and beautiful locations, and great gear, and great people, and I was totally psyched for it- then, two Fridays ago I was informed that the whole thing was cancelled. Cancelled! In a nutshell- I was crushed. But I'm a tough guy so I only cried for a day and a half. After that point it was time to make a new plan. Quickly! The thing is that since I had such big plans for the summer and my life was going to have had been so exciting and interesting, at least different(?) I definitely didn't want to go back to doing something that I'd done before- I didn't want to replay the old me, I wanted something new, and interesting, and exciting!

So, going to the neighborhood store Sunday morning of two weeks ago to buy my soothing pack of cigarrettes for the first time in a month. Ya, that wasn't really working out for me, the whole nicotine abstinence thing, I came out of the store and stood there puffing on my smokey mc'pacifier and ogled the bulletin board and there was the sign for 'Sternman needed'- and right off I emailed myself the phone #. After living over here on "The Backside" of the island (Mount Desert Island) for the last 6 years, which is the heart of lobster country USA- I've learned that sometimes lobstermen will hire inexperienced people to train as sternmen because they can be trained from the ground up like, no previous bad habits or such. So I figured that I'm healthy, still young enough (almost), and at least like to get up early and I like boats and love the ocean, and my whole family (except brother Andy) has gone to sea, so maybe I had a chance. Therefore the next day, after considering a couple other mostly lame options, I called the fella. He answered the phone on the dock and after some questions and some further follow up questions by his fiance (mostly to check my reputation it seemed) I ended up down at the dock on Friday morning of last week at 5:55 am (I showed up a bit early)- (and 5:50 AM is pretty late for this time of year, so he must have been going easy on me for that day). Met him as he was pulling up to the dock at the time which is good because he didn't have to wait, he said come on aboard and I said, which was redundant at the time, but I just really wanted to say it- "permission to come aboard Captain?". A couple guys in the boat over on the other side said something about breaking in the new greenhorn, a couple chuckles later etc, and we were off.

Fishermen's memorial. Then you walk by this.

Captain Dan at the wheel. I'll introduce you to him proper later on. 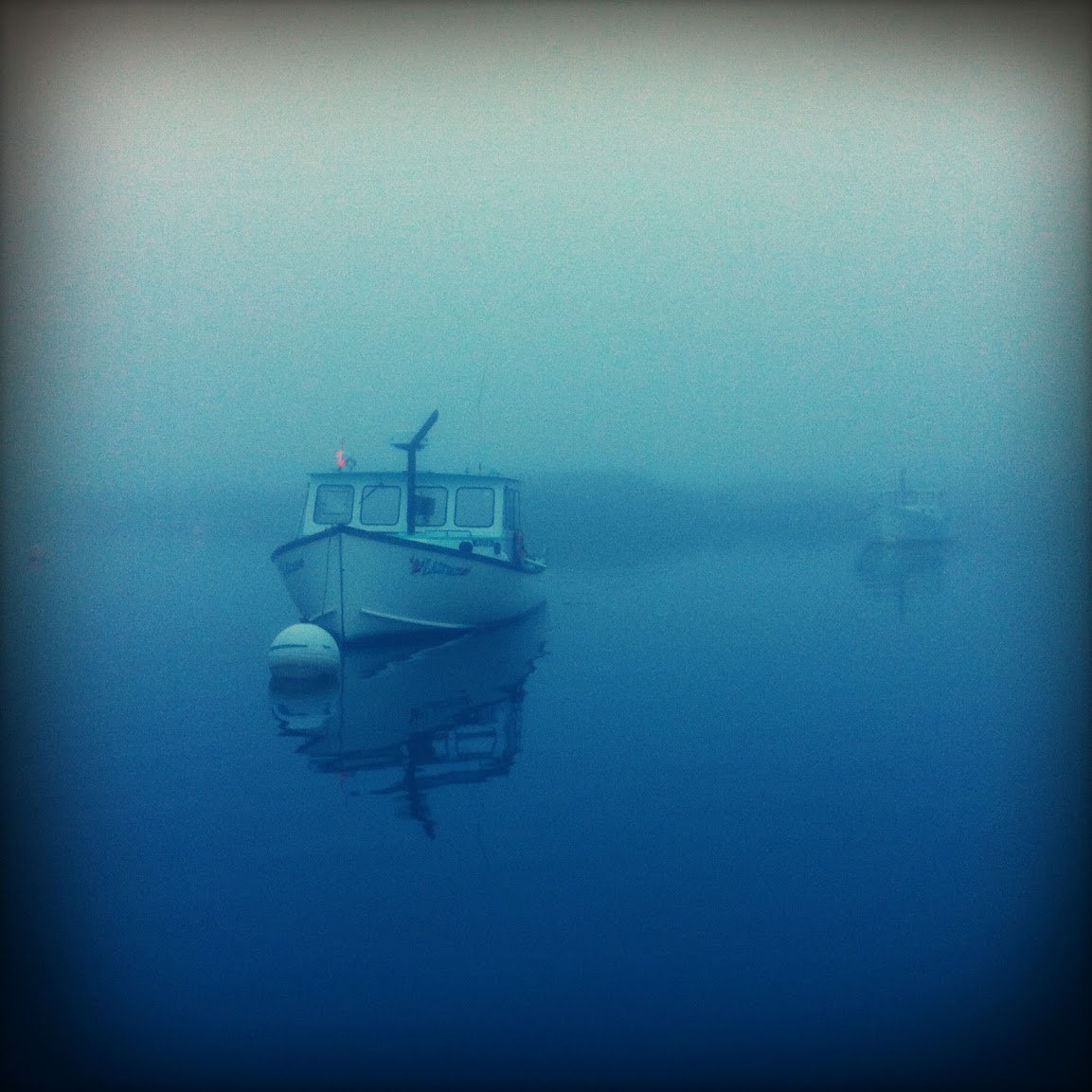 Motoring past another lobster boat at anchor.

My whole life I have been a fickle dood- for the first part of my life I wanted to be an Air Force pilot, then I wanted to be a professional windsurfer, then I went to college to be a jazz musician and composer, then I became a chef, then I worked as a carpenter, then I was a truck driver all over Maine which led to finding all kinds of excellent locations for photography, then I was a glassblower, then I discovered making photography. Not to say that any of those things I didn't love enough to keep doing them forever, just for one reason or another I moved on. Photography has sustained me for the last 13 years now though because I can always find time for it on my own time and I don't need to depend on anyone else for any part of the workflow to achieve creativity. Photography is something that has always been just all mine. I guess one of the big reasons that I've never tried to "strike out on my own" with it though is that I learned being a musician that it's extremely discouraging to have to find jobs all the time. I just never had enough faith to work for myself and always wanted to work for someone else and then later go and create for myself. And as far as being a fickle guy, change is good- and that's why Maine is such a great place to live: just about the last job you'll end up working at around here will be in an office, therefore experiential life moments become par for the course. You work a day and feel alive for it, not the opposite. Not to compare anyone or any job or to say that this is better than that- and I'm sure there are a number of office jobs that I would thrive in- creative ones in some kind of way or other, I'm just wicked psyched for my new office out on the ocean off the coast of Maine.

Here's a reality check: it's not a pleasure cruise out there! We're not waterskiing while drinking beer with bikini girls playing Jimmy Buffet songs casually plucking lobsters like cherries off the waves- no. Do you like fish? Are you a cat? Then you'd loooove my job! I get to scoop up handfulls of dead herring into bait bags- a couple hundred bags so far per day- all day. 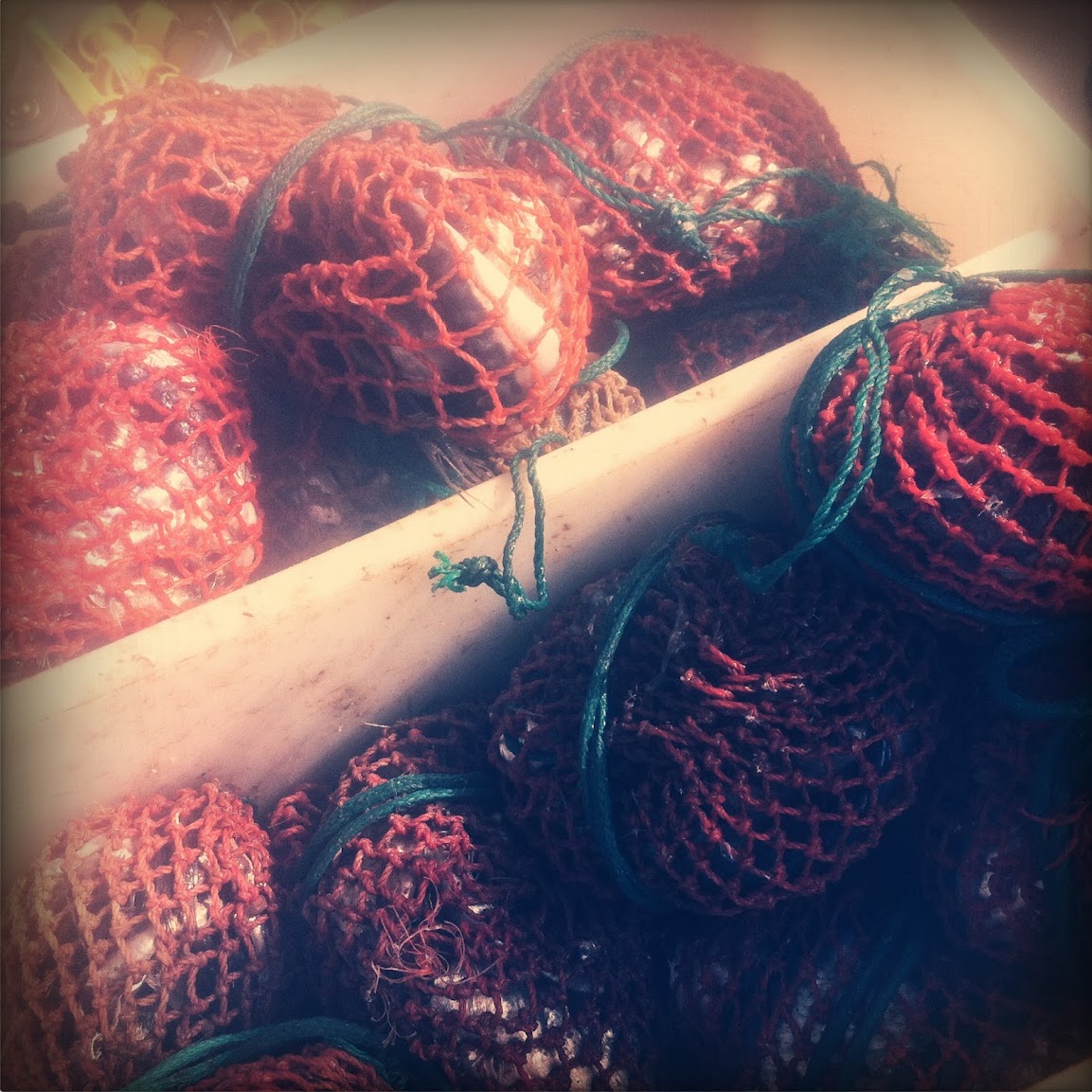 Oh and day starts at 04:30 am, so I get up at 03:30 to pound coffee and sit there reading PetaPixel crosseyed. The nice thing is that my commute is all of 4 minutes from leaving my driveway to parking at the harbor, I leave at about 4:20 to get there early. So on the steam out to the first string I bait bags up then the Captain gaffs the first trap leader and pulls it up in the block and hauls it aboard. Then I grab the pot and drag it down the rail, whip open the door and remove the old bait bag (either nothing but bones or a stinking gelatinous gumball) replace with a new bag, then I pull out the lobsters and put them on the sorting/bait table, meanwhile the Cap'n is doing the same on his trap as they come up in pairs usually. We chuck the bycatch out and the baby lobsters and muck out a couple handfulls of seaweed, close the doors and he steams aways till he knocks them back over. Meanwhile I'm checking them for size and to see if there are any egg bearing or v-notched females (the Cap talks very fondly of the females), banding their claws so they don't destroy each other, and then I get to make more bait bags! The whole time the boat, which is 36 feet long, is totally rolling and rocking literally and sonically to classic-rock so if you can't ride on a subway car without holding on to your straps you probably wouldn't enjoy being out there very much. There's no real time to be sea sick or eat or pee or really anything else but keep on pulling pots but the air is fresh and the ocean is a beautiful place to work. Also, where part of me fantasized about somehow turning this into a working-editorial in photos, I knew before I ever stepped out onto the boat that that wasn't a likely scenario. There's always something that needs to be done on a boat. The only way to ever make serious photography on a lobster boat would be to go out with a crew and only shoot. A number of times I have tried to turn on my iPhone to make some quick snaps and the thing won't even slide to unlock as apparently Cupertino has built in a 'will not recognize a fishy finger' feature. So I've got a few here for you here for now but that'll have to suffice until I make a day of it with just my kit and a clean fish-free hand.

Traps on the transom.

Landscape from the sea. 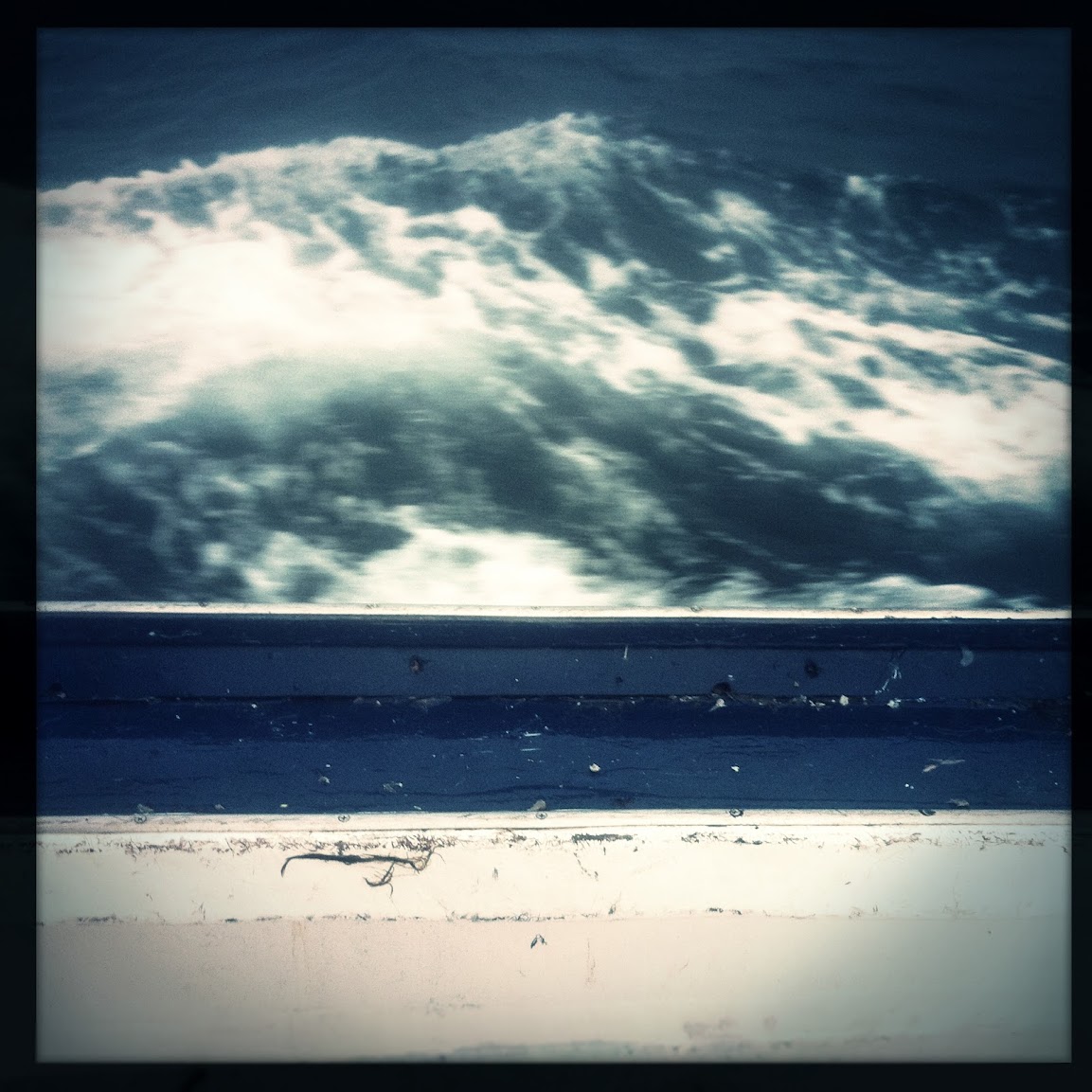 Rail and sea abstract- feels like a Google maps sat view of a beach and waves. 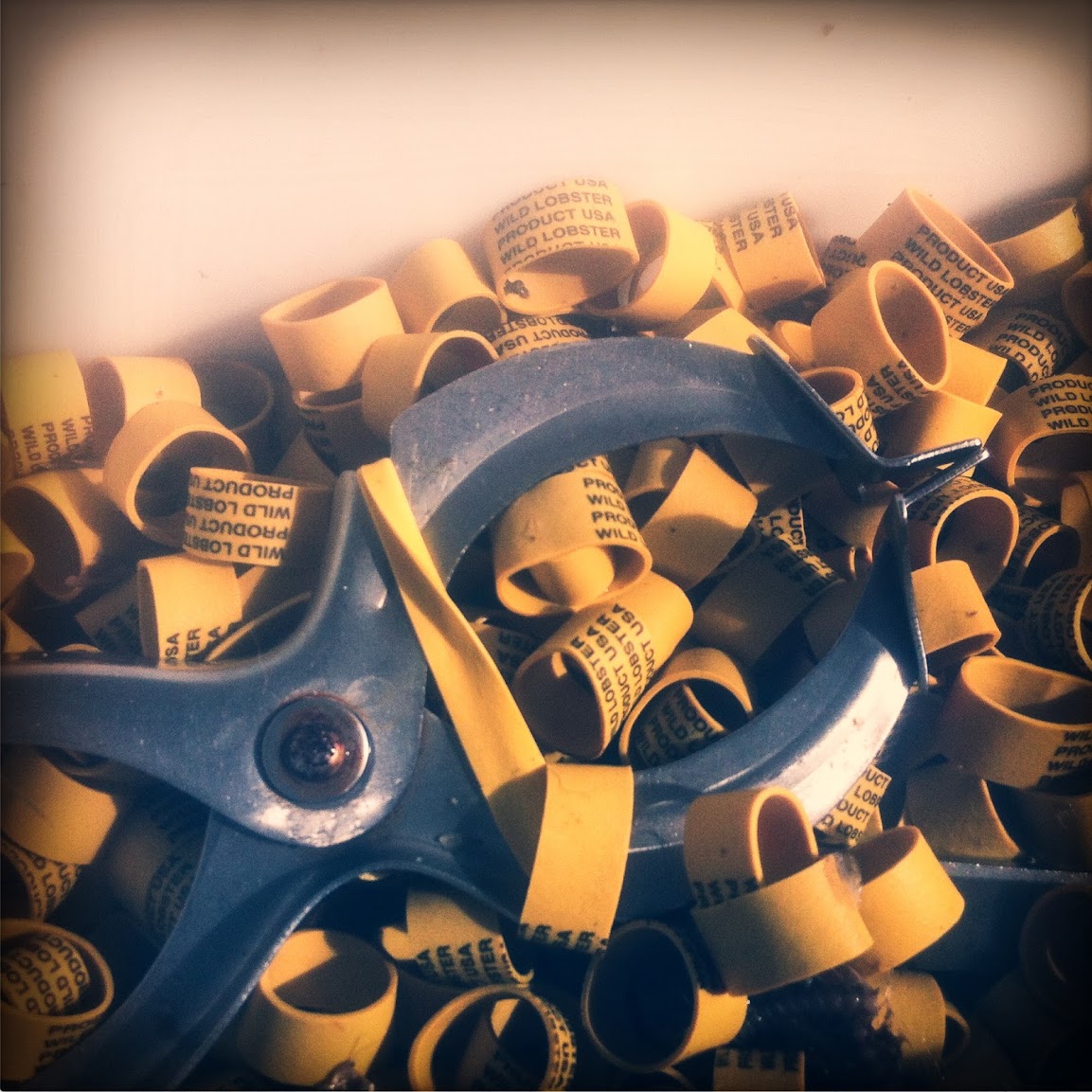 Tools of the trade. Lobster banding pliers. (I've got a real bad story concerning these- ask me later)

iPhone wanted to make this image without asking- I agreed later.

Insurance policy. Analogous to a UV filter for a photographer (really doesn't do crap but makes you feel glad that you have it?) 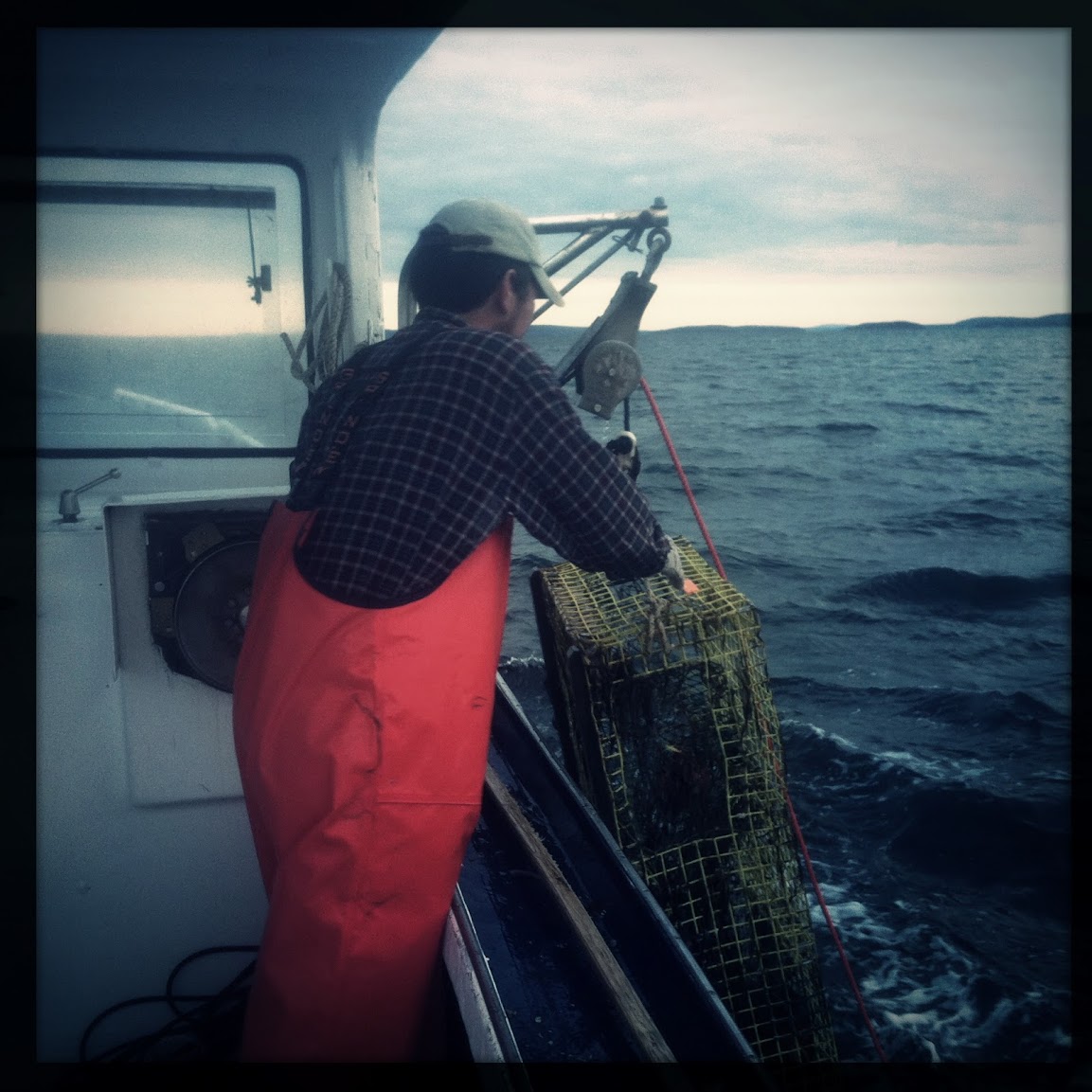 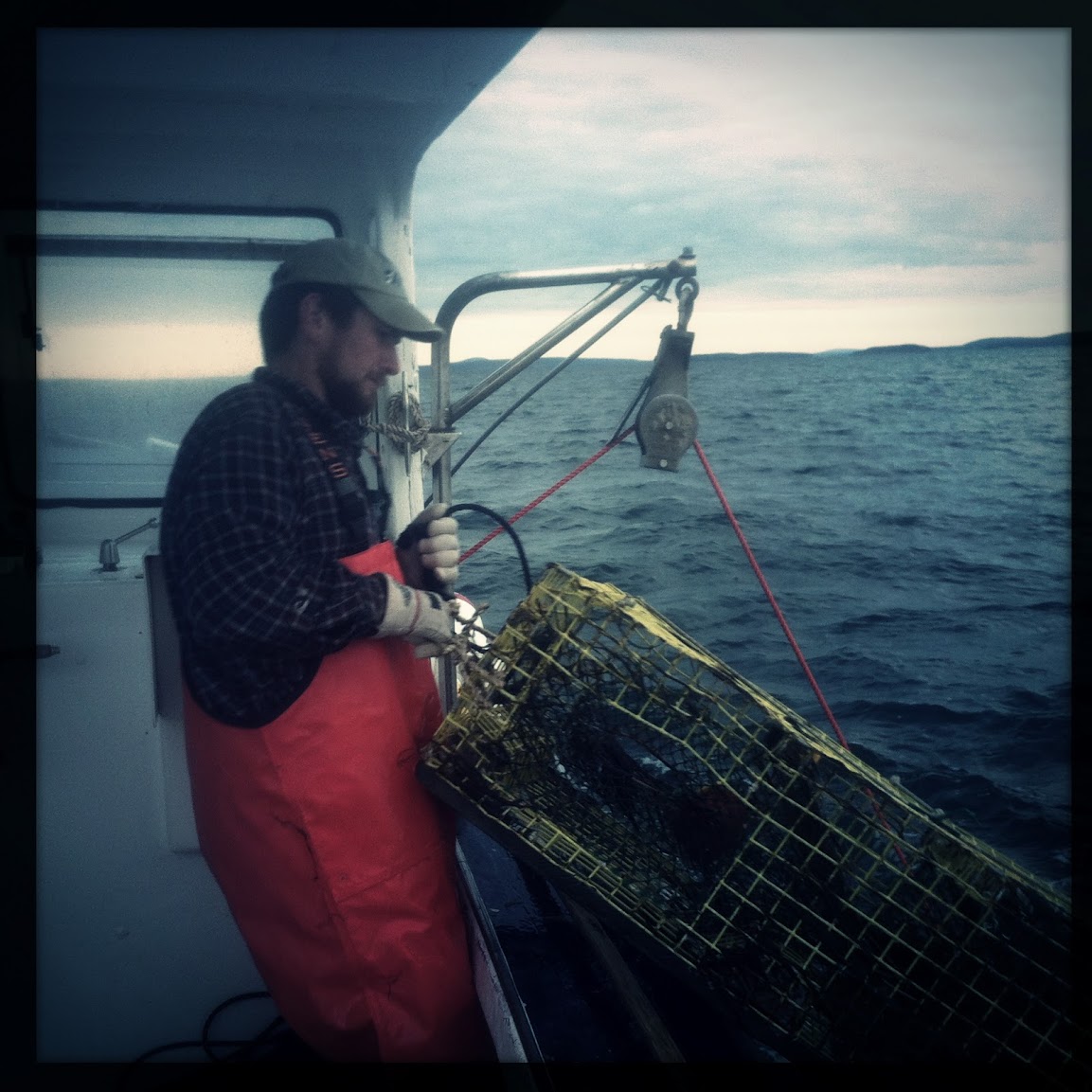 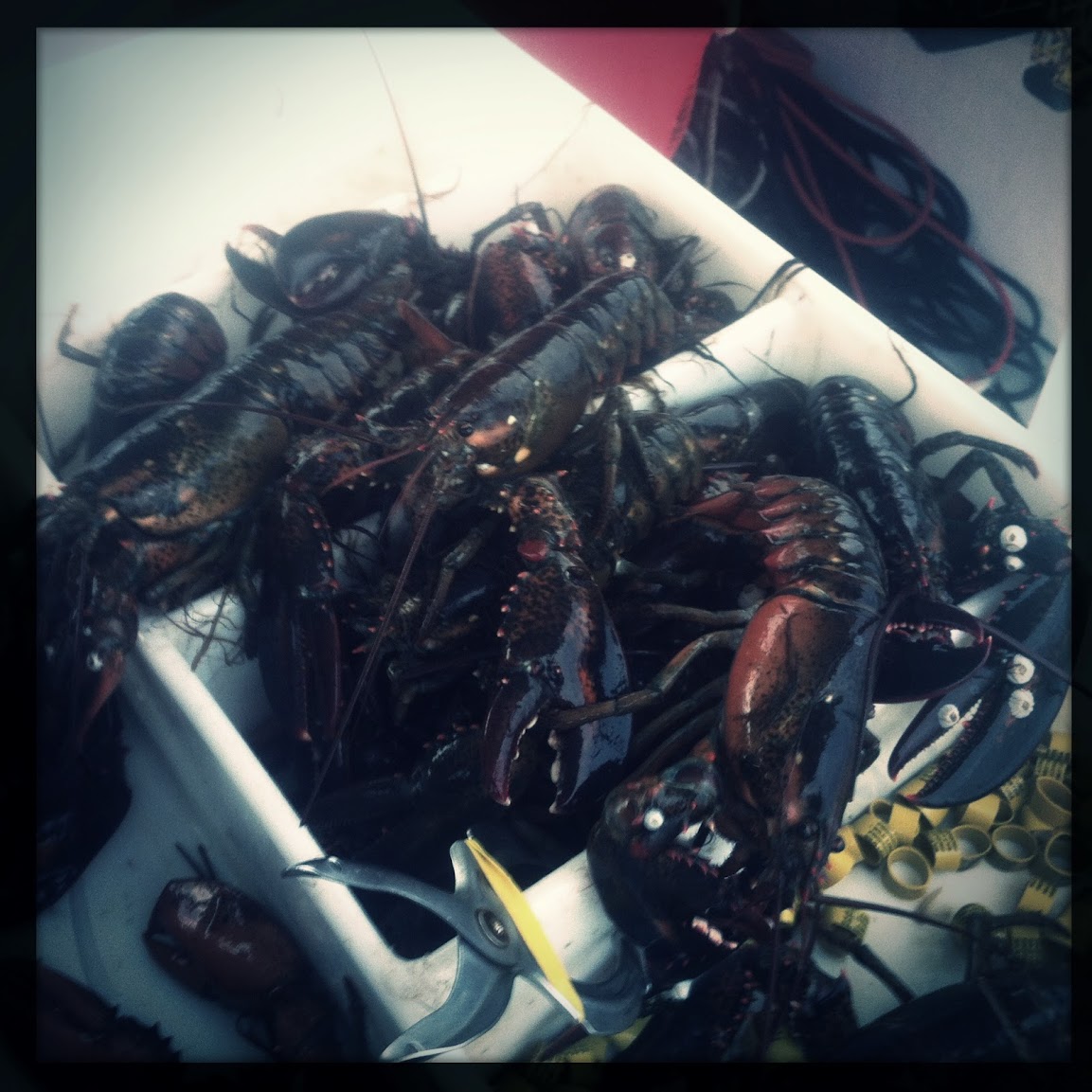 Bugs waiting to be banded. 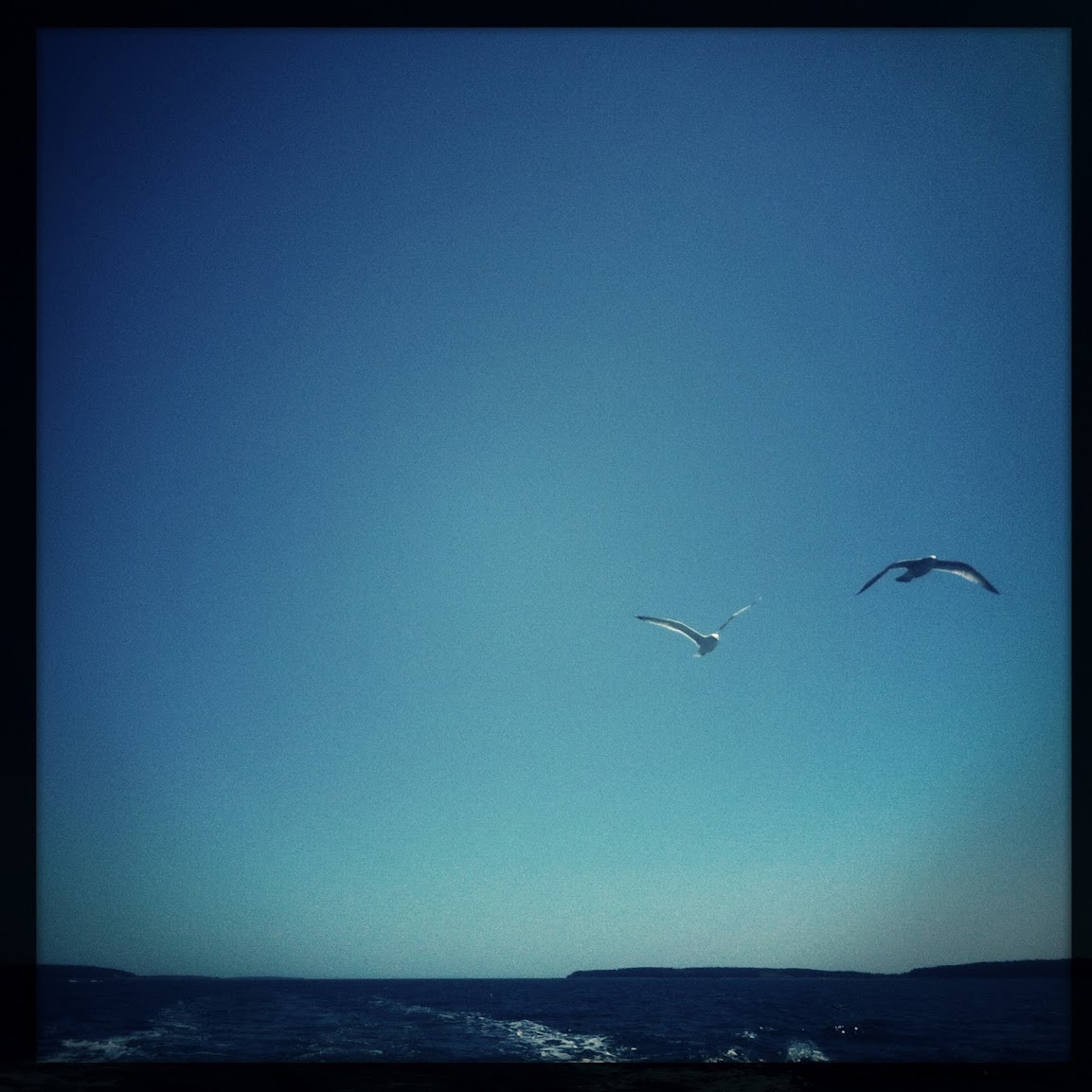 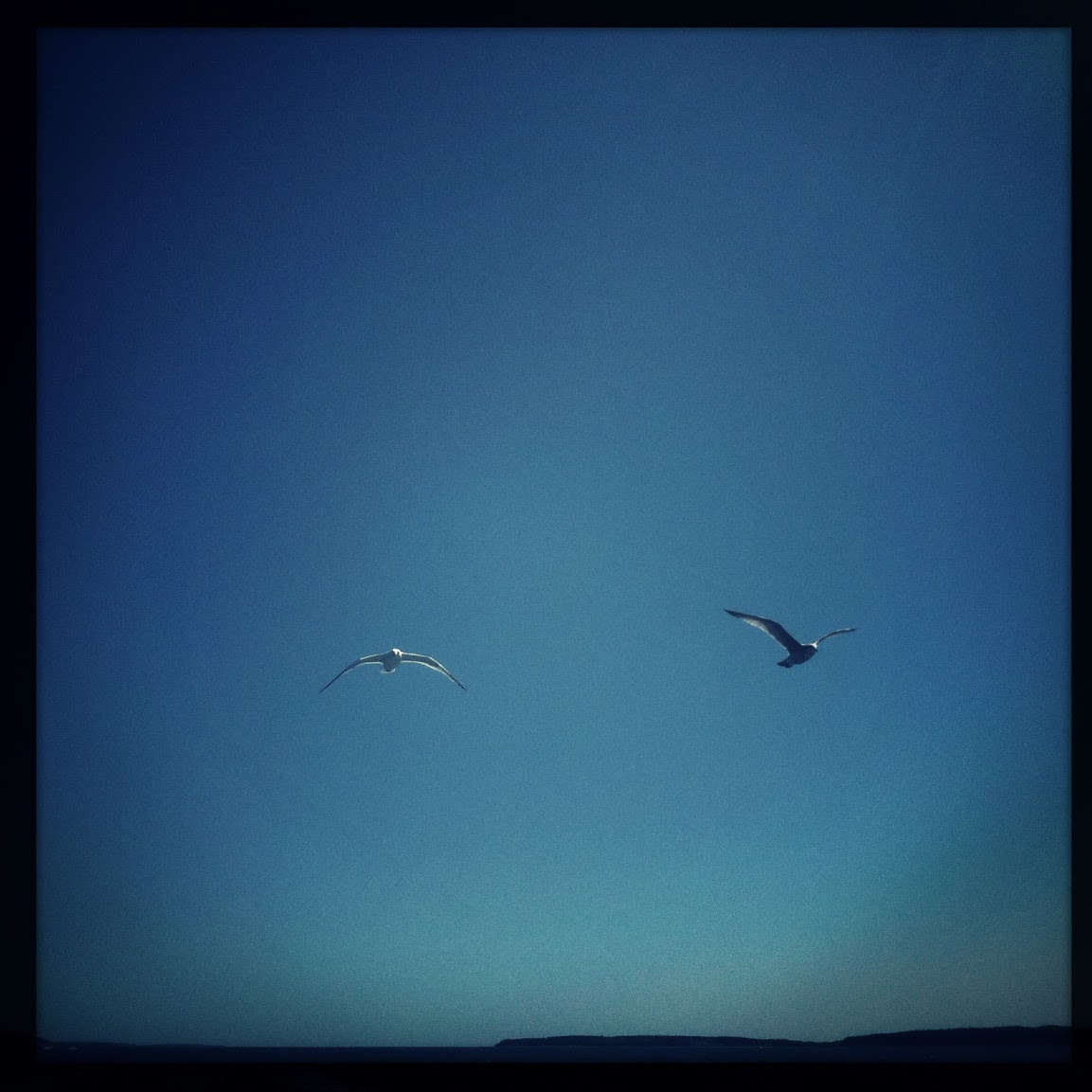 Gulls looking for a handout.

Yours truly. Since it's becoming obvious that the only camera I'll be using will be my phone I really feel the need for a better phone camera than my iPhone4. I figure I'll get a GoPro at some point which will be cool, so maybe that'll be the answer.

By the way I can still feel the boat rocking if I close my eyes, even if I don't close my eyes it's still rocking-

And, maybe, if we hit it hard and make a killing I'll even be able to go to Iceland AND buy myself something nice like that new Canon 200-400 with 1.4 converter on it or some Hartblei Tilt-shifts of something :-)

We'll see. Wish me luck and maybe I'll even run a FREE LOBSTER GIVEAWAY or something sometime this summer!

Have a good one my flatlander friends- Nate!

http://www.lucknowescorts.co.in/mumbai-escorts/
Chennai Escorts(non-registered)
I Love to read your article. Thanks Way of expressing your knowledge through words, it touches my heart.