The Bottom of the Sea at Dawn 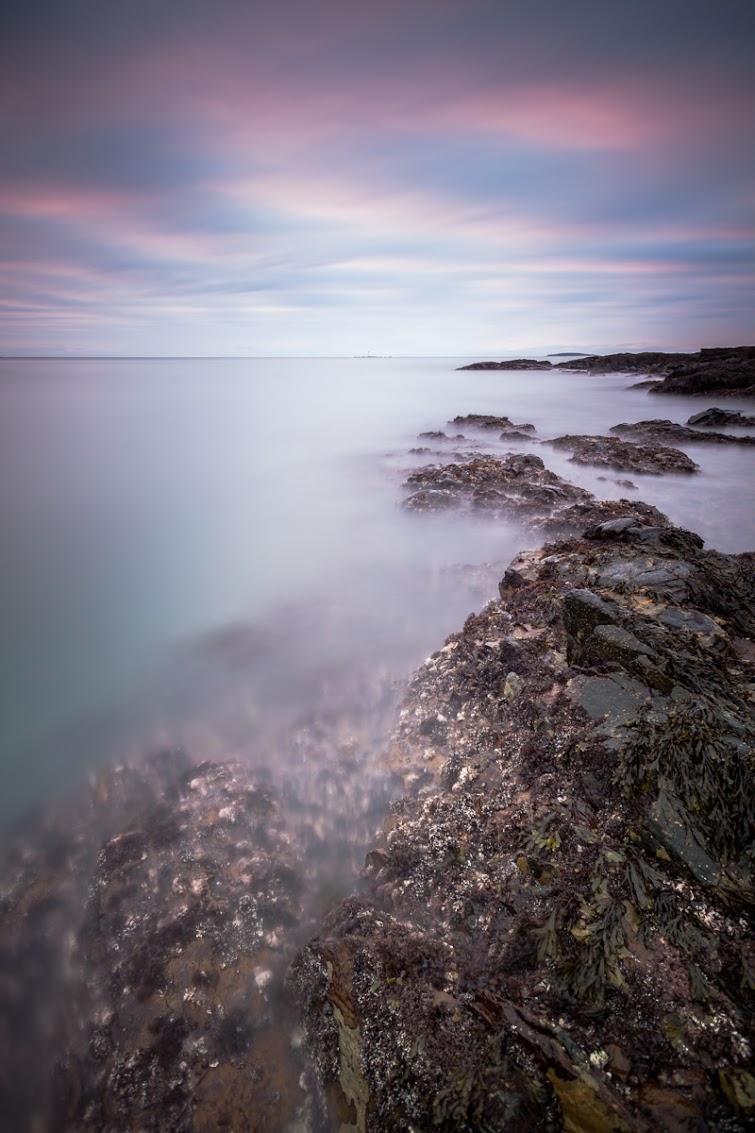 The Bottom of the Sea at Dawn

I don't always produce color imagery, but when I do it's usually a scene at dawn. This was a super low tide at "Seawall" in Acadia where I was able to walk out to a spot I've never been before, a place that was so low that if the tide did decide to come in suddenly, in more of a rush than usual, I would have been washed back by a 12 foot tidal wave- so that would be the equivalent of: think on this for a sec= looking up to 2x your height to the top of the ocean (and that's if you're six feet tall). So that is what it is to stand on the bottom of the sea and still be perfectly dry. You're probably thinking I'm making too big of a deal about this- just sometimes it's fun to think of those things.

Now for something completely different: yesterday something came across my radar whereby a photographer whose blog I was reading mentioned something along the lines of that all photographers are naturally a competitive bunch, and it bugged me a bit. Maybe not because it's true, but because he mentioned it- of course we all want to make the best imagery that we can all the time. We want to make pictures that are National Geographic quality awesomeness that people will remember forever. A photo that is "the" photo of a green pepper. A photo that is the end all and be all of "Horsetail falls" in Yosemite. Now that's another story- getting off the track and gotta get back: I don't know, maybe the reason that we make the photo's that we do is that we saw that image and we want to make it ourselves, just to have it. If that's enough for you then that's enough. But I would offer that the reason that we who make photo's day after day and year after year is to pursue our own personal journey of seeing, and in the meantime we'll make photos of our Mom's and our significant others and our friends and of times in our lives that were important to us and of those postcard scenes, and maybe even make work that eventually has unique vision that is individual and significant and maybe even in some way important. But if we don't become the next William Eggleston or Joel Meyerowitz in our lifetimes then all is not lost, there are still all of those images that we made and it's the others problem for not appreciating them enough if they didn't! Not ours for doing the best that we can do. And that's part of the reason that I'm not looking at as many new pictures these days. I'm trying to be a little bit more independent in my vision. I used to look at tons of photos every day trying to decide what I liked and didn't like- but I've been trying to work on my own images and make more new work instead of looking at others work these days- not to say that you shouldn't keep coming around here avid reader and learner and or curiosity satisfier. Just don't worry too much about the "winning" aspect of doing what you do, eh? Just do because you want to, and we'll all benefit in the end. :-) Seriously.

Technical notes on the photo: (1.) It's a long exposure. Longer then would be normal for this time of day which would be sunrise with the sun up but behind a low long blanket of clouds where the exposure times normally would be about 1/5 sec at f/16 iso 100 or so but I had a 10 stop ND filter on (ND= neutral density, 10 stops= black glass) that made the exposure more like 250 seconds at f 4.5 iso 400 and (2.) I used a 2 stop graduated ND filter to pull back the brighter sky along with  (3.) Lightroom and Photoshop gradients to attenuate the brightnesses and some dodging and shadows brightening in the raw developer to bring up the darks. 17 mm on 17-40 f/4.0L on Canon 5d2. Long exposures appeal to me because they make normal scenes looks ethereal in that anything moving becomes beautifully blurred. And that's the way I see it. Have a nice day and make some good pictures my friends, and keep on coming back! -Nate.

Click Here To Know More(non-registered)
I am very enjoyed for this blog. Its an informative topic. It help me very much to solve some problems. Its opportunity are so fantastic and working style so speedy.
manvasoine(non-registered)
The bottom of the sea at dawn, the great techniques and generating more color imagery, the more reviews on photography. I am suggesting this http://www.essaysoriginreview.com/review-on-bestessays-com/ to all for who are looking for more reviews on essay topics and more writing reviews.
Jim Denham(non-registered)
More than competitive, I find myself critical of others' work, ya know what I mean? I see things in their photos that I may have once did and see it as a flaw, even though they may be just fine which it. Because of these type of things, I may think of myself as being better, but I don't get motivated to go out and try to make a better photo than this guy or that guy did just because the image was popular. With all of that crap stated, I think you're idea of not looking at as many pictures and focusing on your work is a good idea. Keeping your own vision is kind of hard if you look at a hundred images a day. Nice color image my friend and keep dropping the great discussion lines!
Brian Powell(non-registered)
Great image Nate -- can't wait to bag some long exposures of waterlines this Fall!