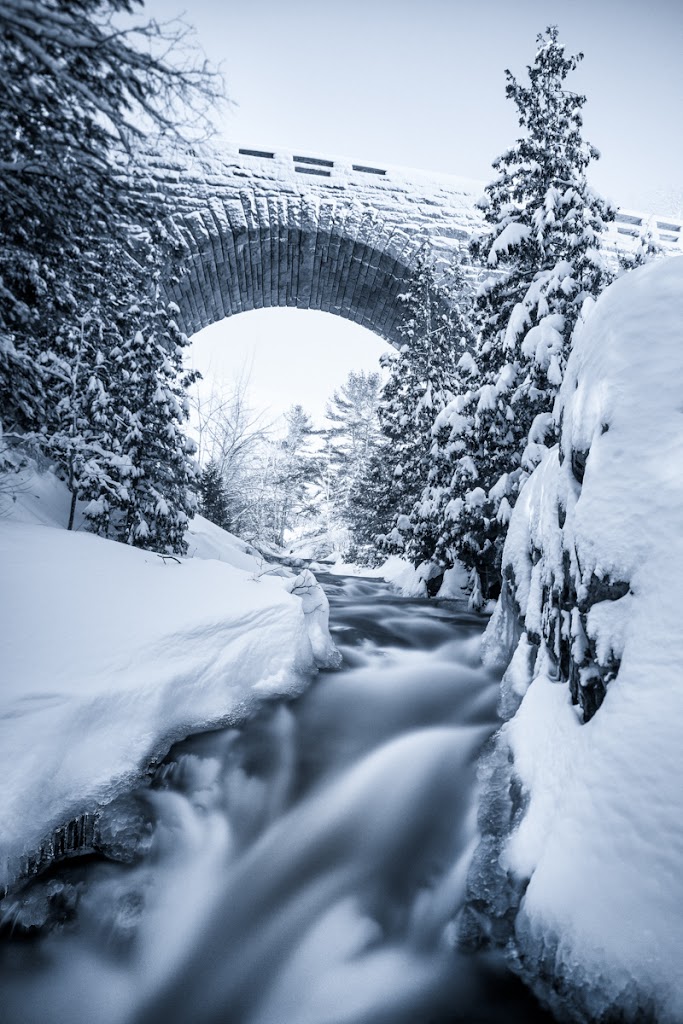 Duck Brook Cyanopowder 74 seconds at f/11 iso 100 24mm Ts-e with a little diagonal tilt for the heck of it.

Oy! Hello my stable-mates (not inferring that anyone of us is even tempered, just a greeting to my upright walking animal friends.) So I've been working on this image on and off since it was made back on the 31'st of December of last year. We had just had our sweet big powder snow fall of the winter of about a foot or so with lots of fluffy blowing drifts and I figured to revisit the 'Duck Brook Bridge in the Snow' shot that I haven't made now for a few years. The fun part of this trip is always the glissade down the hill to the streams edge in the snow. When the powder is deep enough, like it was that day, it's just a few big but slides down the hill- the trick is to not ruin the snow in your shot or go too fast and end up in the water. Here's the thing: I've had the hardest time with this picture since I made it, I just couldn't find the soul in it in post, I could never find the direction to go with completing it. But I still thought it could be a beautiful image even with the clear blue sky that it was that day. The thing is about our winters here is that it gets so cold and so high pressure system after another that more often than not it's a bitter chilly day with bald blue skies. Which isn't usually what gets me motivated to go picture making. But I had this shot here that had beautiful powder and really such a crisp and clean feel of the winter in Acadia and Maine and when I put it through my usual black and white rendition paces I wasn't feeling it- something was always missing from the emotional side of it. So I went at it again today and this time I again approached it with my usual B+W developing order to bring out the shadows and attenuate the highlights and sharpen and d+B etc etc, then it hit me like a ton of elephant's in the rooms to pop it back to blue and just like that, it was done. So that's dumb- because really it looks just a little different from the capture in the first place. There's a lesson in this somewhere maybe? Something about "don't let your process blind you to seeing"- case in point: I used to be an HDR addict! I've been off the HDR now for almost three years. I should get a nice 77mm commemorative lens cap for that or something. You all have your own vices when it comes to your process- fess up: what are your crutches? Hmmm>?

And as usual, have a nice day. -Nate! 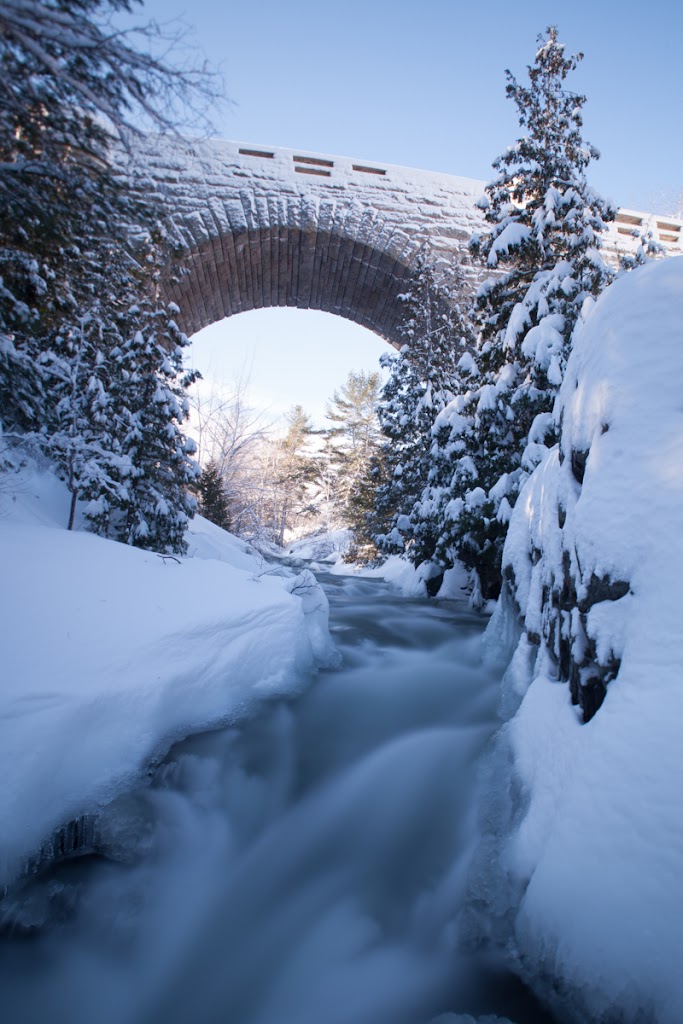 top rated beard trimmer(non-registered)
Well, although none of the beard trimmers can serve you forever, however, trimmers with self sharpening blades are much better in their long life.
Jenn(non-registered)
What a great direction to take it in - the blue holds all the detail but brings the sky back. Lovely.
Kathie Jamison Cote(non-registered)
What a remarkable shot of this bridge! Being a dancer, I loved your use of the word glissade down the embankment. And what a tricky embankment to traverse, glad you didn't fall into the water, because there's nothing easy about getting to this spot to photograph! Good Job and Fabulous Photo!
Stephen Cairns(non-registered)
I'm struggling with some snow images myself so I can appreciate this. Can't be a creature of routine. That's good. Next time I open my snow files, I'll keep this post in mind and try something different (or just do less). While not BW, this is still monochrome and it works wonderfully. The viewer is still fixed on shape and texture but with the added element of a cool winter blue. Good stuff.
Jim Nickelson(non-registered)
Great post, Nate, and lovely image, too. And what a great idea to question our crutches -- I suspect mine would be the square format. Maybe I should do something about that...
No comments posted.
Loading...
Subscribe
RSS
Recent Posts
Update Summer 2015 iPhone beat me at my own game- Dream Job: Photographing a Lexus ad in the deep of winter in Maine Update: got married, shooting flash, and snow on the ground. The 26 hour day- Triptychs and diptychs oh my! On maintaining creative momentum, or How I learned to stop worrying and love the process Revisiting old processes reaching for new results. Cape Cod before's and after's's's's... On Breaking the Rules= Don't Always Show Your Best Work?
Keywords
maine acadia national park photography have a nice day nate parker photography black and white acadia national park acadia bar harbor maine photography canon
Archive
January February March April May June July August September October November December
© Nate Parker Photography
Powered by ZENFOLIO User Agreement
Cancel
Continue