Into the North Maine Woods 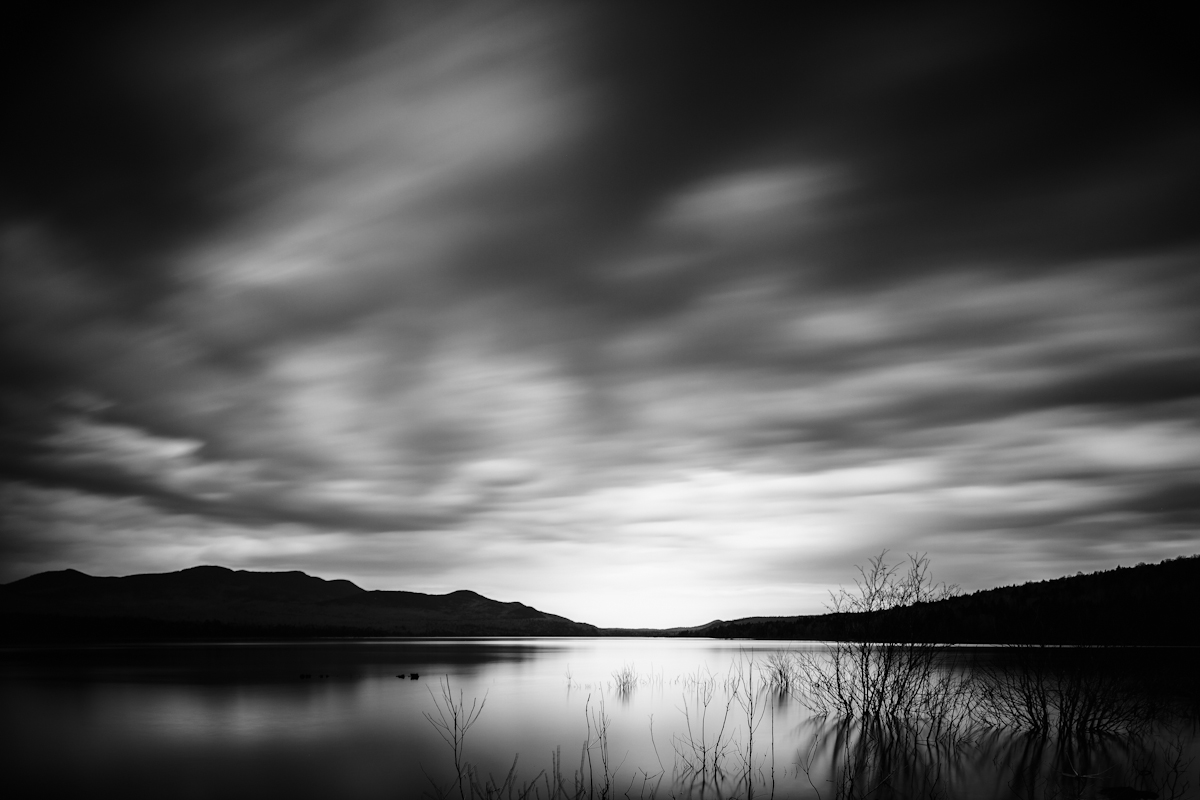 "We're out of beer!" That's the last thing you want to hear or utter when you're hours north deep in timber country over worse case-scenario nearly impassable roads.

**The following I do not either endorse, advertise or necessarily condone, it will be just an observation with a little bit of questionable first person narrative thrown in.**

Right then, so a good buddy and neighbor and longtime friend of mine, we'll call him "Mike", owns a chunk of timberland way up out in the woods in northern Maine, it's just west of Baxter State Park and it's beautiful yet certainly rugged country. It's timberland in that it's a giant farm of sorts for trees. Just about the entire area, which is a massive area, is owned and managed and harvested by a few different companies that cut and ship the wood to the mills and plant and manage sustainably to be continued over and over again. But here as I write this on the binary basis of digi, you gotta wonder how sustainable it is after all. (unintentional editorial).

There are beautiful mountain ranges, lakes, ponds, moose, bears (danger bears!), beaver, fishes, eagles, trees trees and more trees, rivers, you see where I'm going with this: it's sweet, wonderful wilderness where cell phones don't work and the mail doesn't arrive, but then again- don't hurt yourself because it's a long way to help. knock on wood. 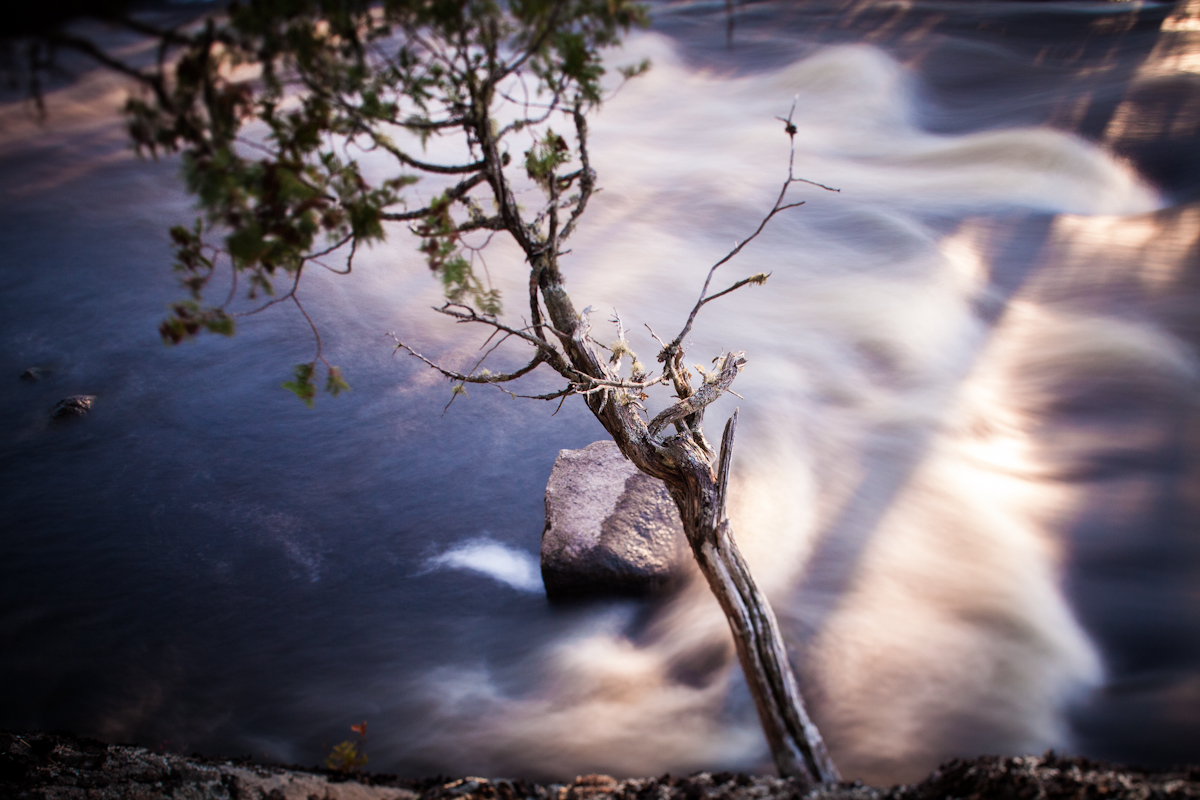 So the first time we went "upta camp" was last year this time in April. Three couples of us and a whole shebangfull of kids headed up in 4 separate vehicles. 4 breakdowns later (four!) including the truck pulling the cabin/ice shack/home-away-from-home blowing the head of the engine (most likely due to the beer load), and 12 hours later- it really takes just about 3.5 hours on a good day, we arrived to find the place was totally socked in with 3 feet of thick snow blocking his 15 mile long driveway!?/road. So we had to backtrack to a sandpit down the road and set up a giant old Korean War era military M.A.S.H. style tent that "Mike" had brought for us all, and at 9:00 o'clock in the evening, in the freeze, with Giant moose tracks all around us, we all built the thing and packed the 5 kids and 6 adults into it with the wood stove blazed and hunkered down for the night.  Here I'm skipping over the part where my girlfriend is almost killed by a falling tent pole, and various other random instances of disorder and chaos just to be succinct. Let's just say that that night very nearly sucked! 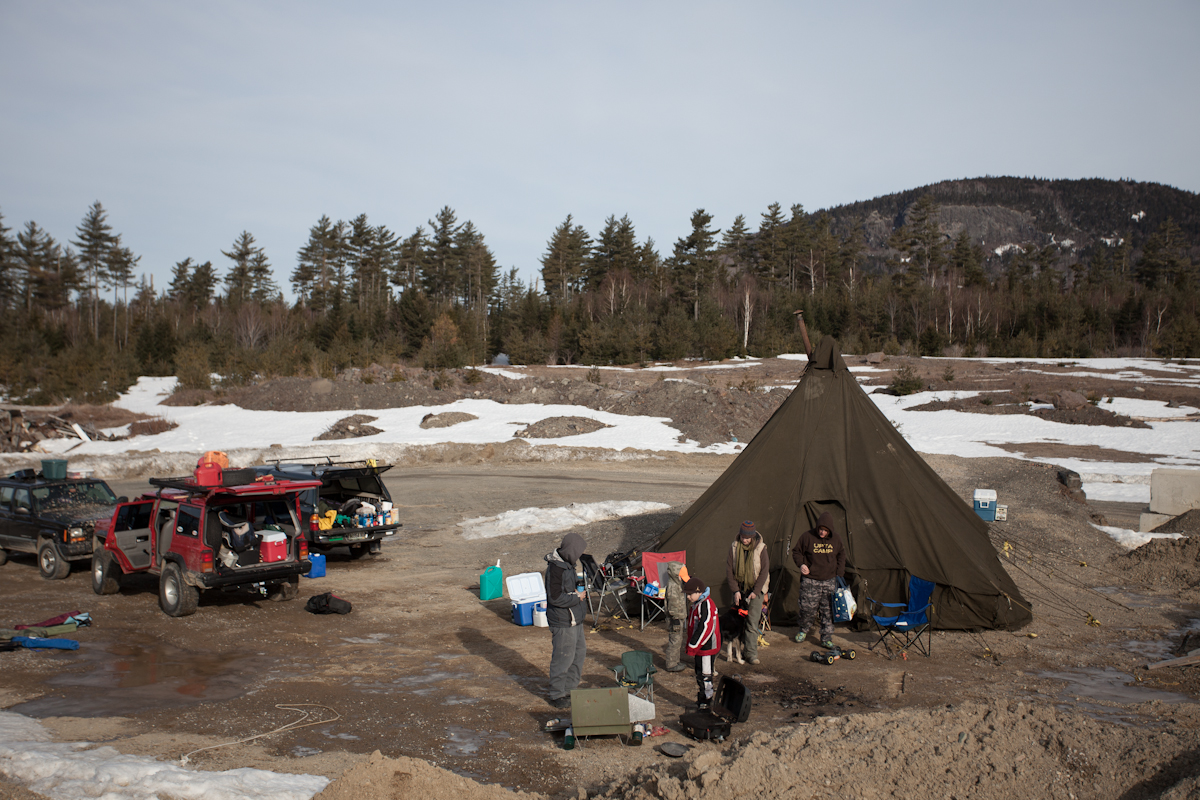 But the thing is that when the sun eventually rises and the phone never rings and there are no noises but the noises that are wild and natural to the place you realize that it's really sweet to be there indeed. 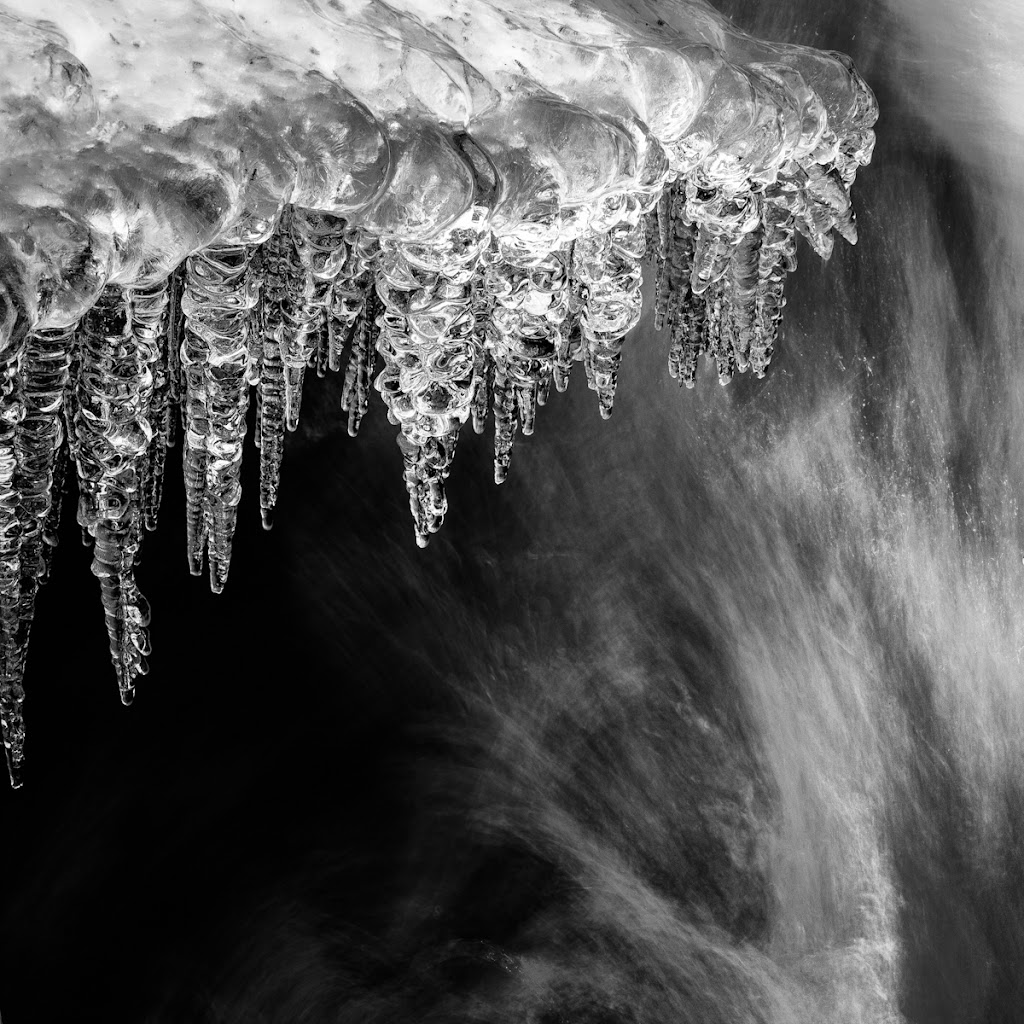 So Soph and I went picture making and left the band after breakfasts and saw stuff like this: 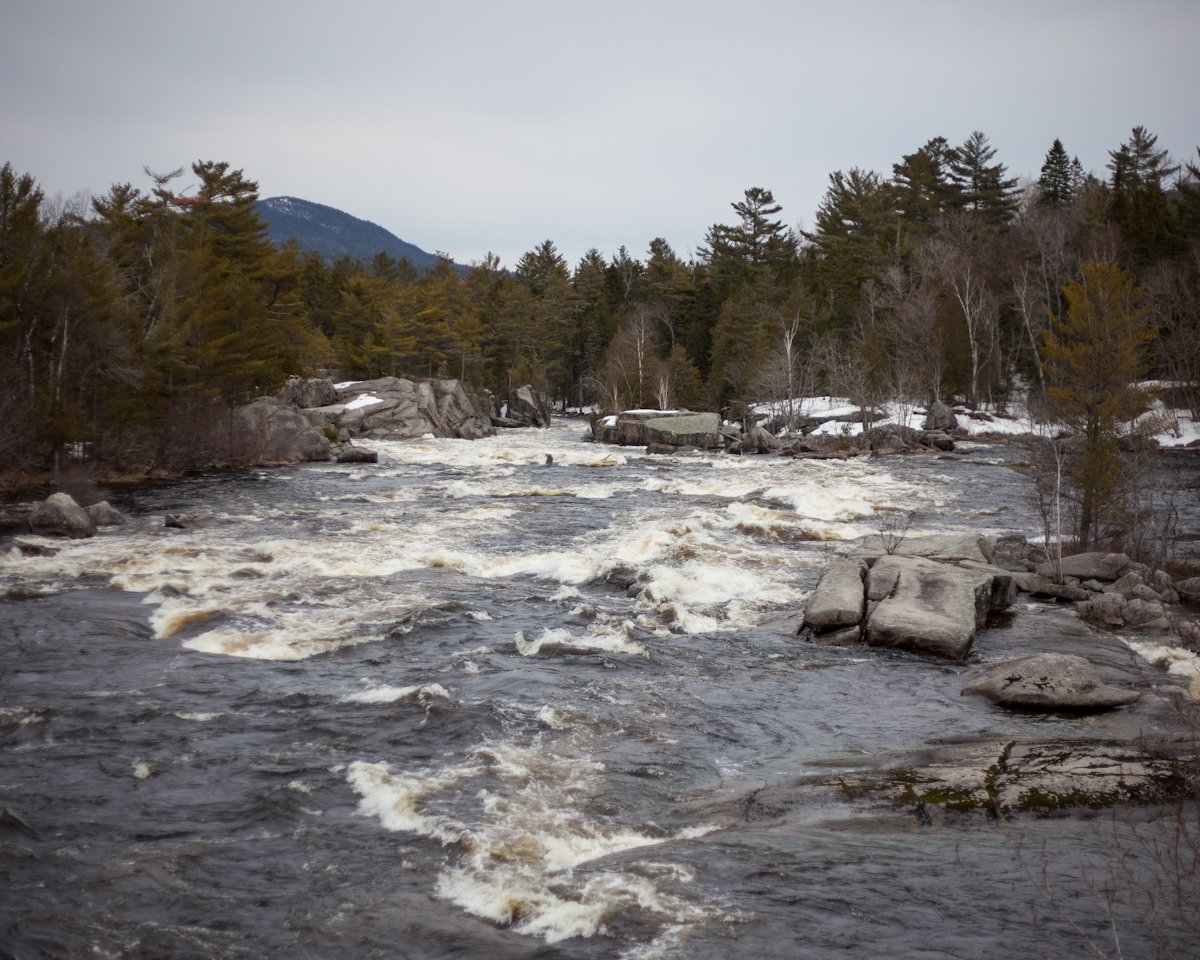 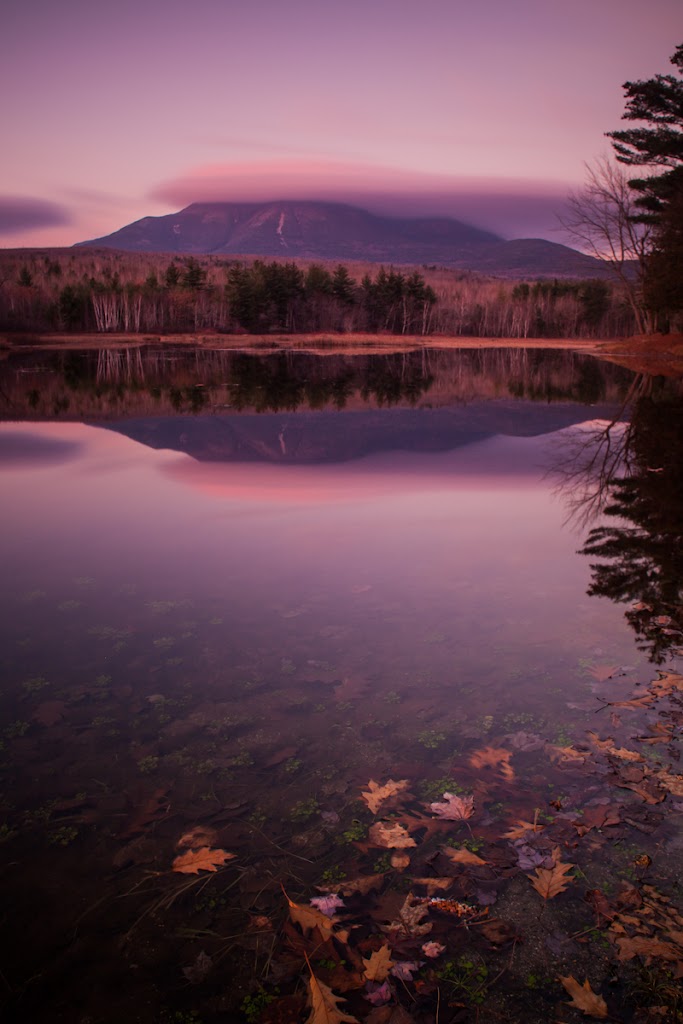 and when we got back to "camp" (the sandpit) we found that the whole kittenkaboodle was packed up and they had reserved us a sweet, sweet lakeside cabin only a few miles away and that it was then raining and sleeting, a cabin with walls and a floor was a godsend! Propane heat and bunks and a pull out sofa and an enclosed porch here we come. Pretty easy to appreciate the simple things when you are away from them even for so briefly at that point! So in the end, an albeit abridged introduction and first trip to the northwoods- great success!

So that was the first time up: trying, enlightening, refreshing, and rewarding- then I went back with the fellas in November: 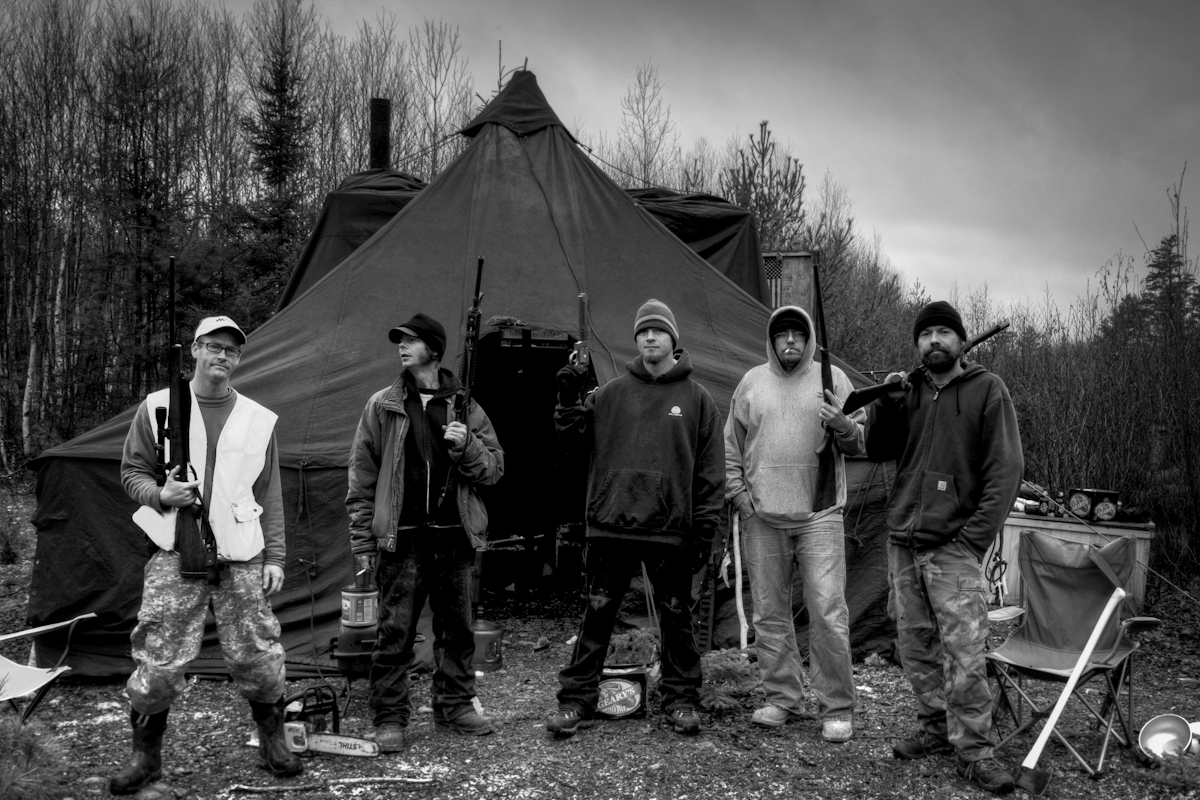 I'm the guy on the right with the Mossberg pump-action shotgun.

The first morning there in November my buddy "Mike" heads out for a quick partridge hunt while the rest of us slobs are pulling ourselves together with coffee, and a little while later we collectively hear a couple shots in the distance through the trees and Mike comes back to camp looking like this: 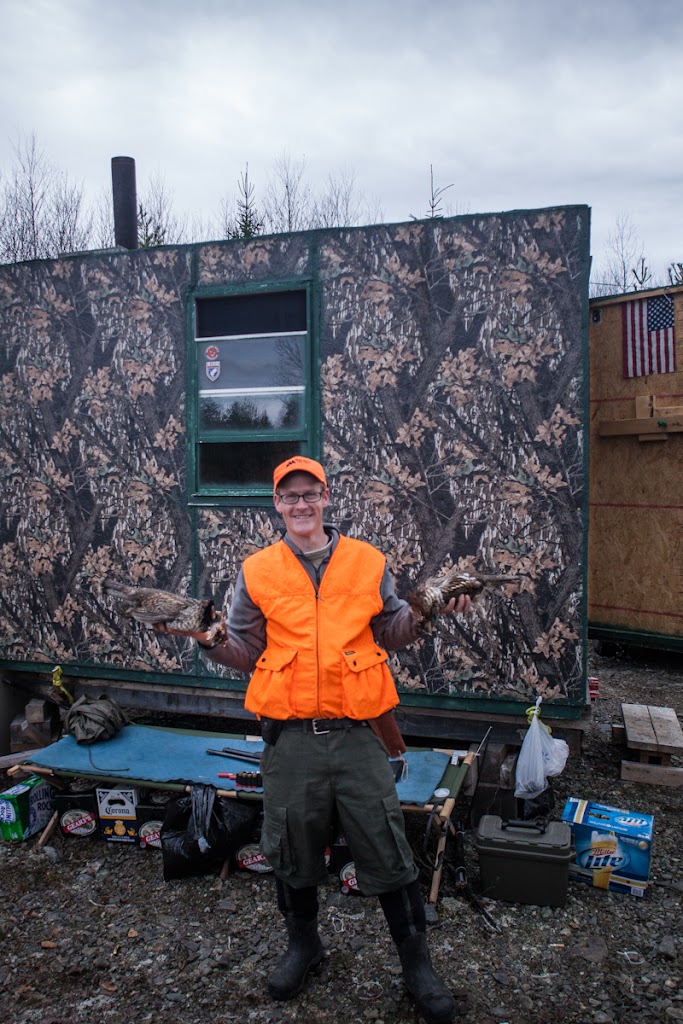 and pulls two big plump partridges out of his pockets grinning like a new dad. And lemme tell ya, I don't know if it was the experience of being there drinking beer around the campfire with some cool guys or just the not corn-fed wild diet of those gracious birds, but that was the best chicken dinner I can ever remember having! 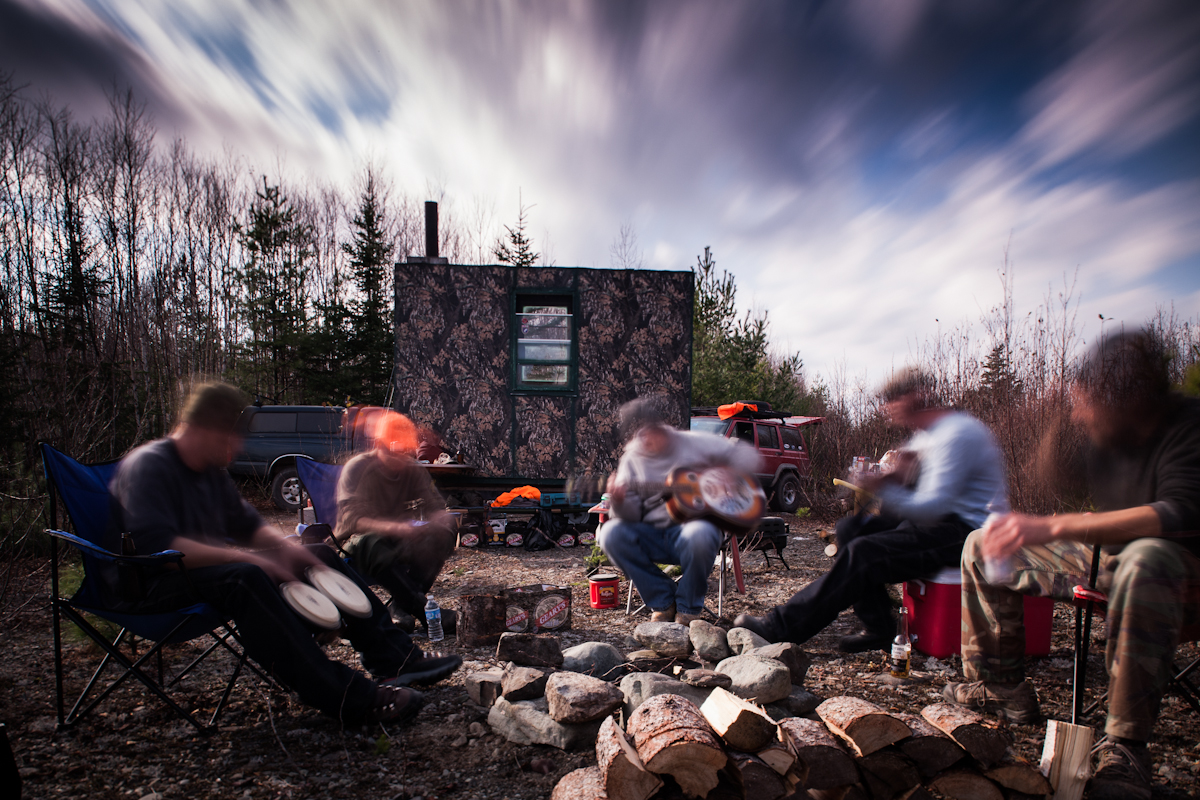 northwoods jam session 2011. I'm the guy on the right playing the egg

So then I went and made pictures like this: 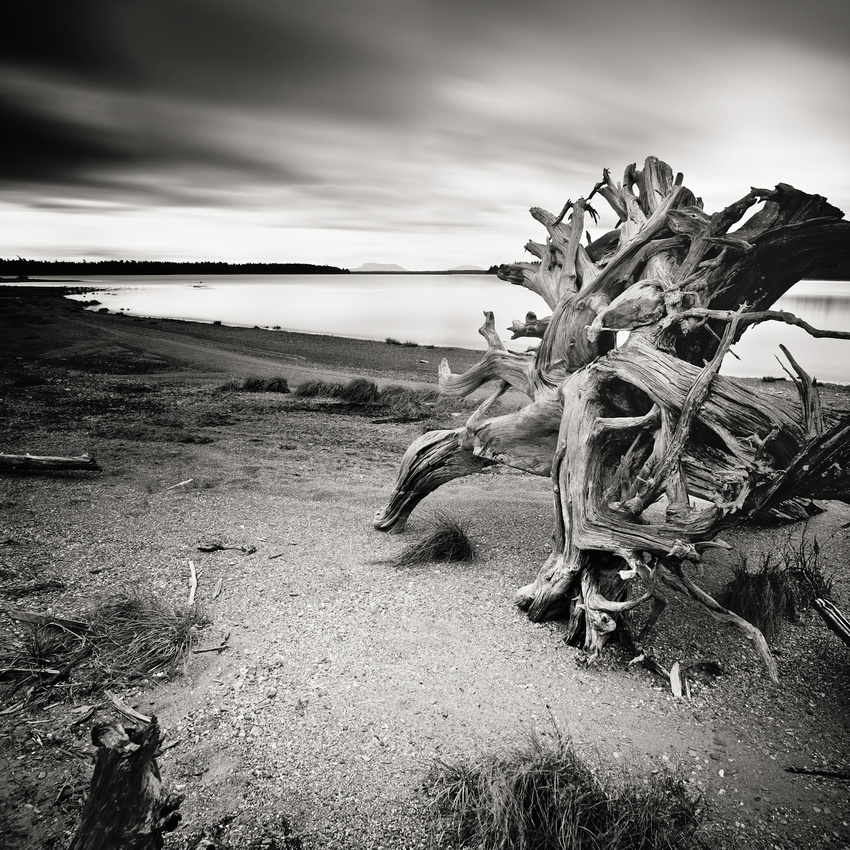 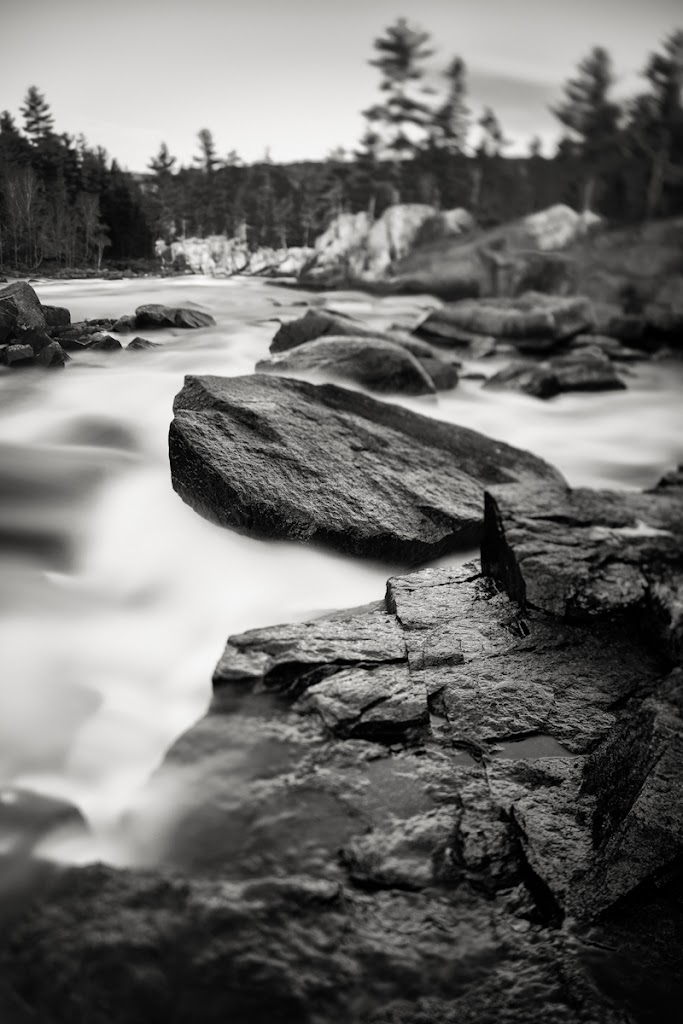 and after a long weekend of training and shooting and beer drinking and various other adventures too exciting and or too embarrassing to get into we came across this guy on the way out of the woods who had just bagged a moose hunting by himself- which is a mean feat in itself as far as I can gather, and I made a picture of him and the game warden at the weigh station: (*not fit for children*) 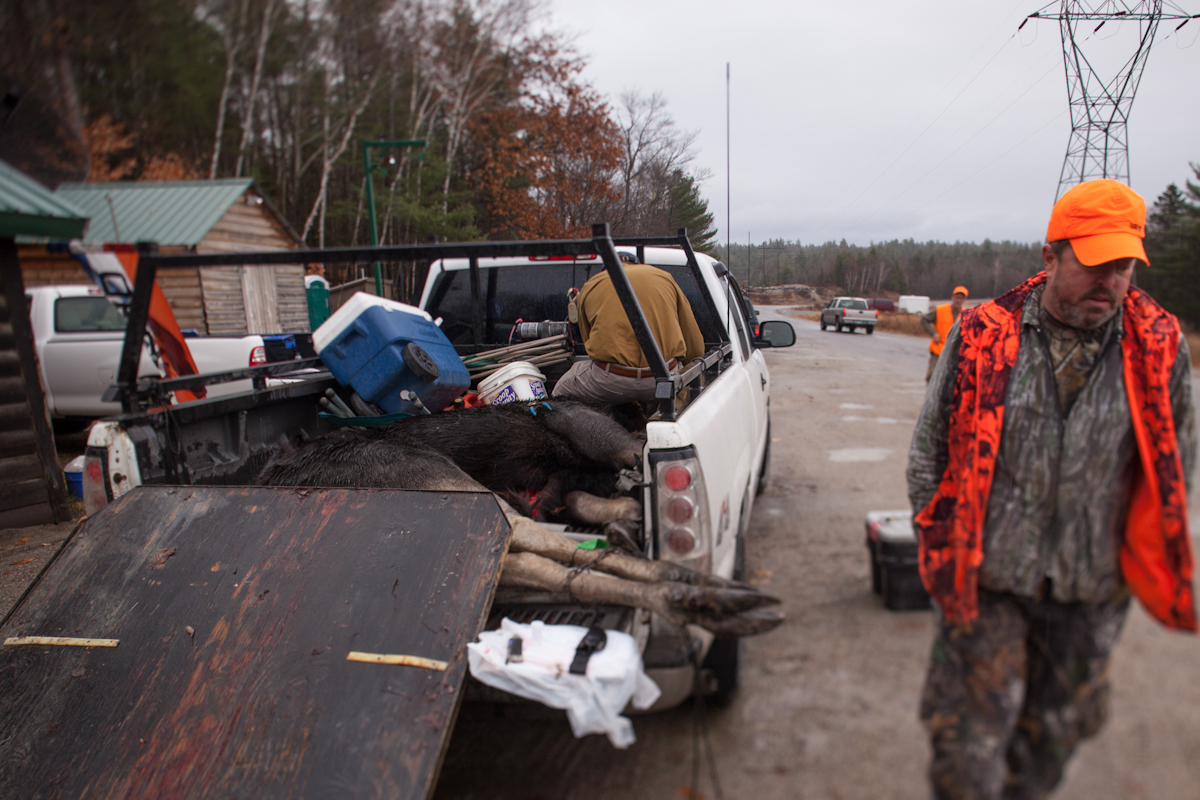 northwoods moose and hunter and warden at weigh station 2011

That was pretty crazy, I've got some more pictures of this but you don't want to see them.

So when my buddy Mike said "let's go upta camp" just this past last week, I was in- especially that it has been particularly warm and dry here this winter and we figured it would be no big problem to get in there this spring vs. last spring.

I wanted to make a big go of it for the picture making and wanted to check out some new areas that I haven't been to before, but in the end this time it was just a nice vacation from the usual and I only shot a little bit. I think that it's really tough to make landscapes and especially Le's when I have a non-camera friend with me (Le's: long exposures), because I always feel like I can't stay long enough at the scene to really find the image that I'm looking for without imposing on my friends time. Whether or not this is a correct interpretation of what's actually going on is beyond me, I just know that I like to shoot by myself. And I wasn't by myself hardly at all last weekend, so, then, though, but it was a great vacation, and it was nice to get away and it was great to get back. And I'm lucky enough to live in an arguably even more beautiful place than the northwoods wilderness, and there is hot water and plumbing here. But there's definitely not much of this where I live: 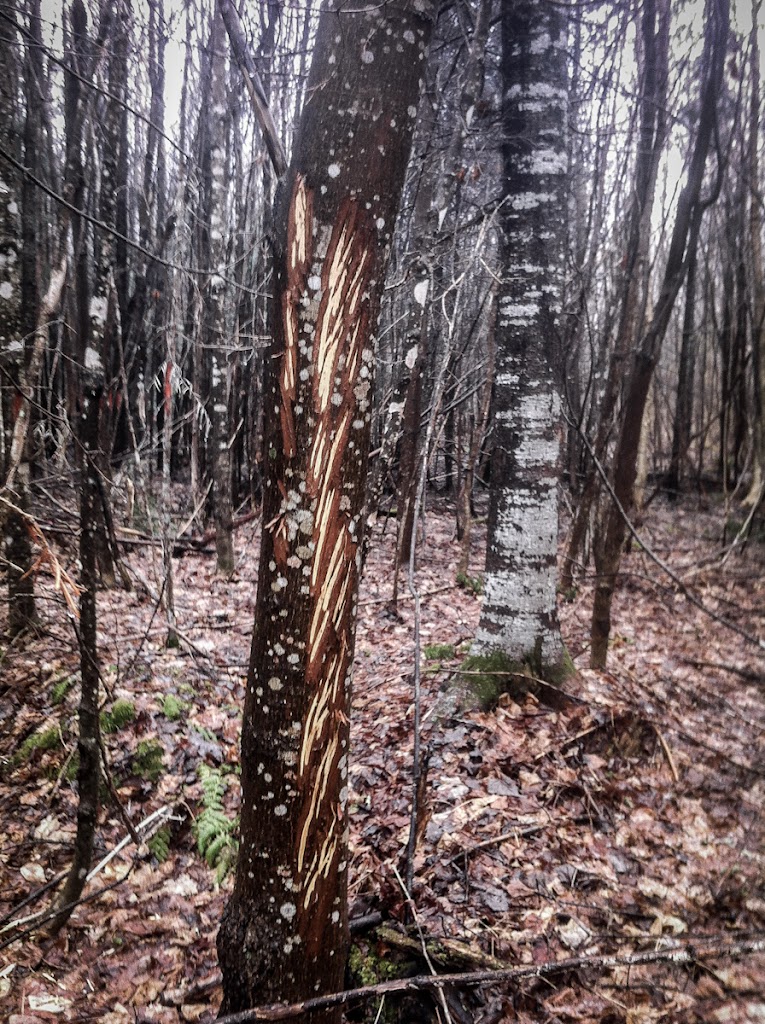 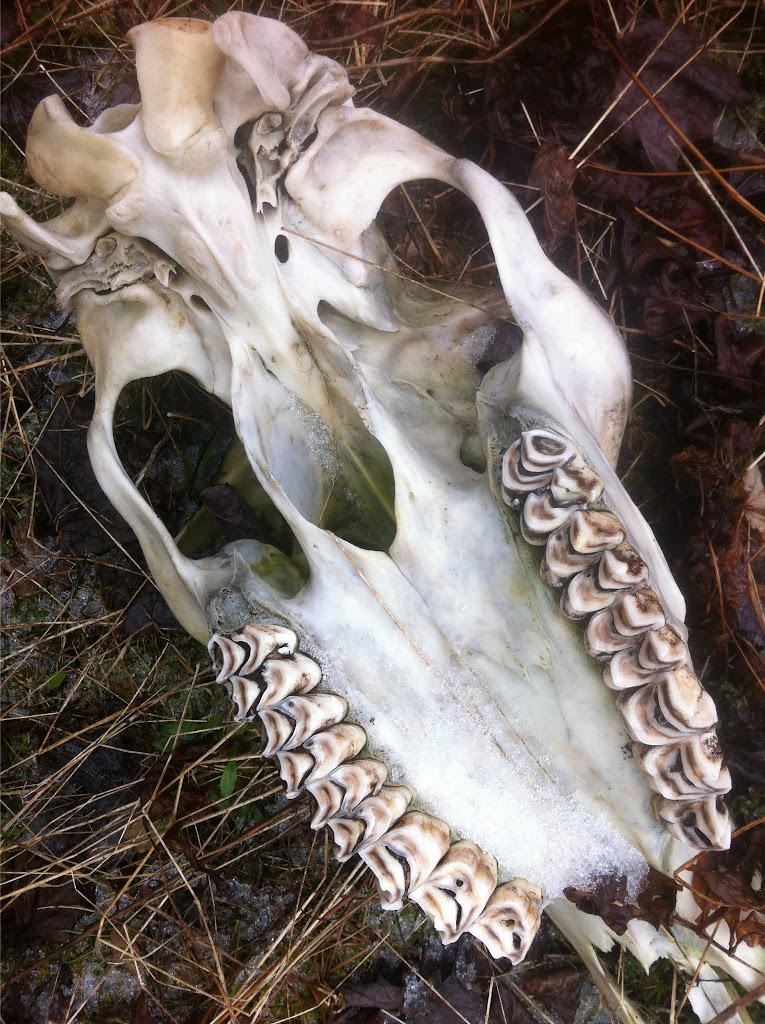 Which in the end I guess I'm not too disappointed about, I'll take regular sighting's of bald eagles over regular sightings of bear here on the island that we live on, but it was cool to see a couple giant moose up there along the road, and then there were what I swear were two giant golden eagles. I mean [email protected] So that was cool. There will be another epic trip to the woods to come, and then maybe I'll get to check out those places that I have only seen on the map, but until then- have a wicked nice day folkies, thanks for stopping in and have a nice day- Nate.

P.s. One more for the road, a birch forest shaky abstract thing just to keep you all guessing :) 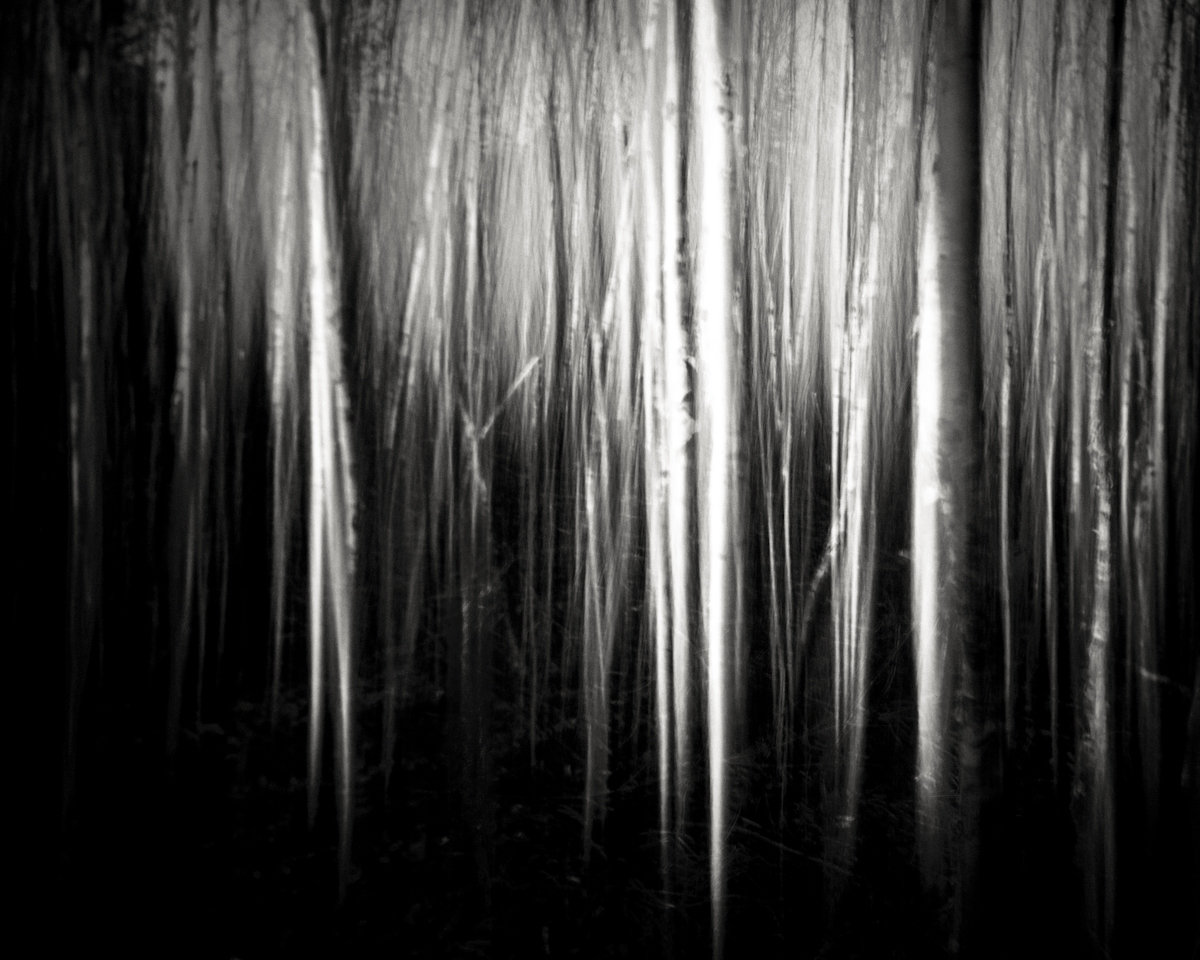