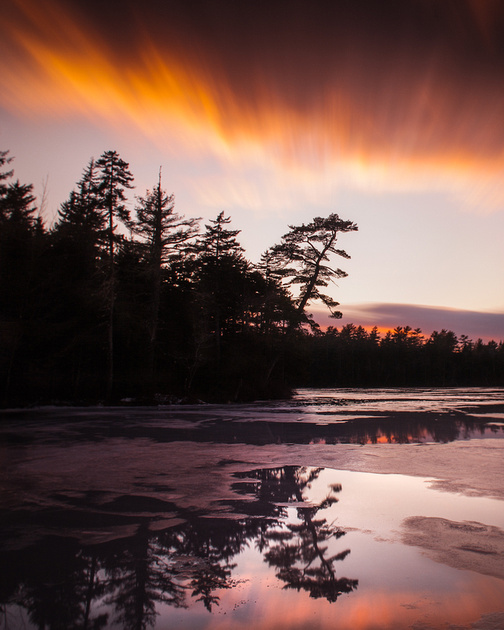 As the number one (#1) post to this "blog" (?) -(I think this would be better described as the ramblings of someone who has too much time on his hands, with a camera! Well, too much time is really an exaggeration: just enough time would be a better description perhaps), I'll talk about how I make a picture.

The first thing is something that I learned a bunch of years ago regarding calling it "Making a picture" instead of "taking a picture". The difference is intention and foresight and visualization, not that there isn't a time and a place for "taking a picture" and sure I still love to do that and try to make exercises of taking pictures for fun and off the cuff and at family gatherings, but to split hairs I guess that those intentional moments are making pictures as well- forget that, I gotta stick to the point!

The next first thing in making a picture for me is planning the shot- I want to have a vision in my mind to achieve before getting on site with my tripod. Now there's nothing like cloud chasing or driving down a country road looking for a photogenic barn to shoot, but still there you have an image in mind and you are just looking for all of the elements to line up and then you know it when you see it like Bam There It Is!! But that often burns a lot of gas, so Google Maps and satellite views are awesome for scouting, as well as Flickr and G+ image searching to get an idea of what you'll see when you get there, a satellite can't quite do that. So todays image I'll talk about was a sunset shoot of a local frozen lake about 20 minutes from me. There was a rain front that blew through early in the afternoon and was breaking in time for late afternoon light and I figured the conditions would be ripe for a dynamic sky that would reflect nicely off the standing puddles on the lake ice. So I left with enough time to get to the area about an hour before actual sundown.

The next item, we'll call this item #2 on the list is to arrive at your destination and get with the environment, I mean let the dust settle, look and listen, check for other 'togs so you don't have to have a distracting gear conversation (do that after you've got the shot), and get a feel for the picture you're going to make. Or, slam the door of your car before it even rolls to a stop, leaving the e-brake off forgetfully (it's ok the car will roll to a stop eventually somewhere (this happened to me)), grab your kit and your tripod (we are all using tripods aren't we?) and [email protected]$ slipping and scampering to the first obvious balanced scene you can find. This is where you take the opportunity to soak your shoes and pants as well, this is called "being immersed in the experience", and rip off a few shots to at least have something before the light changes too much. Then you'll catch your breath and realize what you need to do and where you need to go to get what you came for.

#3. Make the picture. This image is the last image I made of this scene before going to location number two (#2), and as is so often the case, it is my favorite of the shoot. After making a variety of different images I settled on framing this scene to include the character of those old spruce trees and have a balance of the dynamic glowing clouds overhead, and it was at this time that the sky glow changed to a particularly dramatic red purple and orange just before the clouds finished reflecting the underglow and went dark for the night. So waiting it out was necessary to get what I wanted, in the past it would have been tempting to think that I got something good fifteen minutes earlier and try to blast down to another spot around the corner and then probably the moment would have been missed. It's really a debatable bit, move on or stay here to see if it gets better. There are weather apps like Accuweather to check the satellite image and see the moving cloud patterns and then there is the luck app- like: are you feelin lucky?! And probably more often than not I'm relying on that. Lucky socks, lucky coffee cups, lucky rituals all have a place in this equation.

#4 Make the picture yours. There's so many things that go into making an interesting photo, and probably it was a bit ambitious of me to think I could knock this out in a few paragraphs. Things like: Have a camera!, have motivation, have inspiration, have technical education and know how to use your tools, have tasty snacks and a killer web logo? That would be good too. I spend hours and hours looking at images that other people make and find things that I like and don't like about them so that becomes the language as you are what you eat and all, but with that in mind it's important to find your own vision and make images that inspire you. And this is all before the development in post process, that's another story in itself. But the most important step of all is: Go make great pictures, you'll get it if you want it!

Right then, thanks for stopping by- get out of here! -Nate.

John T(non-registered)
Wow! Off to a great start. What a photo! More!
delikizinyeri(non-registered)
Nate, you're in inspiration! Thank you!
Nathan Wirth(non-registered)
Nate! I always forget to bring the snack! I do, however, tend to pick up a cup of coffee on the way home! // Cheers, Nathan
Vassilis Tangoulis(non-registered)
Great essay for a photographer..like your language dude..! actually more or less this is my workflow as well..
I will just repeat a sentence of yours..."Have a camera!, have motivation, have inspiration, have technical education and know how to use your tools, have tasty snacks.." you should add also something to drink..! but to get serious these are the most important 'Have" for a photographer..