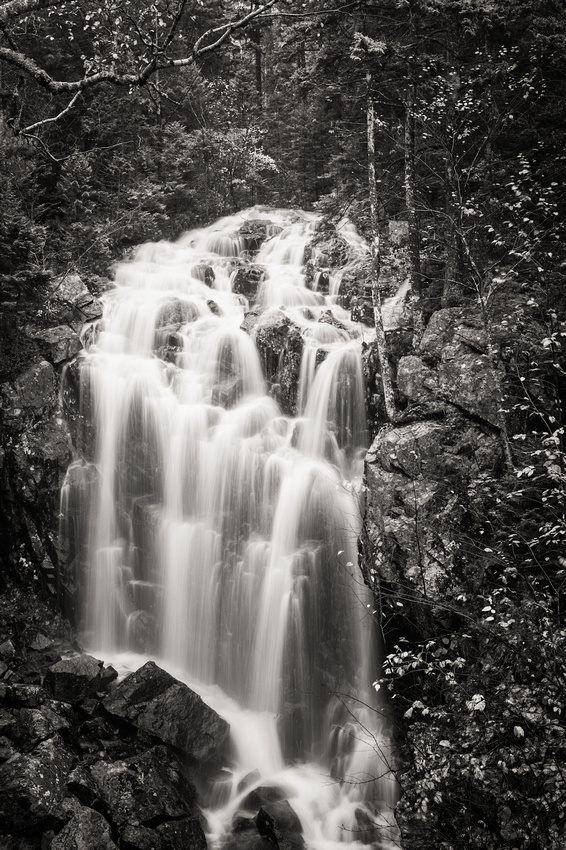 Right then- so here we are: it's rained an unexpected 2.5 to 3 inches overnight (this was yesterday morning (Saturday)), and I had recently been reminded of a great location in Acadia to shoot which is Waterfall Bridge, which is in the timelapse that I embedded in a previous post here that I made like in 2008 or so, but I hadn't been back there since. With the deluge it occurred to me (I wouldn't be a very good captain obvious), that Waterfall Bridge should be kickin- so I headed over right after the 14 hour downpour stopped and pulled into the parking lot at the carriage trail trail head and what do mine eyes behold- there was a photo workshop gathering. My reaction was something like "oh you've gotta be kidding me"- because I wanted to really geek out up there and the shots I was thinking of doing were right smack in front of this forty foot falls so that would be right in the way of these eager paying peoples, so I did what a white-tailed buck would do with a tripod and a backpack full of gear and high tailed it right on up there. Which isn't a breeze cause it's all up hill- and I could hear em all behind and below me on the switchbacks all enthusiasm and clanking tripods, hoofing it themselves, taunting me in the opposite way that one of those little mechanical bunnies taunt those poor greyhounds-

Yeah, so last week I was going on about how it's no biggy to have to share a scene with other shooters because everyones vision is different and where this guy is going to do an hdr and this lady is going to do some abstract dance movement thing and that guys gonna set some steel wool on fire and spin it around or whatever and on and on at least you have safety in numbers: http://nateparkerphotography.com/blog/2012/10/shooting-the-icons--a-response-to-tony-sweets-blog-it-s-crazy-out-there, that time was on a beach on the ocean, this time the environment was just too small! It was a Les Picker workshop. This is him: http://www.lesterpickerphoto.com/content.php?page=about I hadn't heard of the fellow before but apparently he's got some cred's. Shook his hand, nice fellow. And a nice group too. Everybody was all charged and psyched to be there even though it was pretty damp and occasionally raining. They were communicating to each other nicely cooperatively to try to keep out of each others shots- I'm telling you all this cause obviously I wasn't able to get there in time to get the place to myself, got sidetracked at a bridge and stream on the way so, I shared it with them.

The thing is is that I really get used to the off season around here- then there is nobody out there shooting. Some crows, some red squirrels and an occasional hiker- I could have the place to myself for a few hours at a time and take the time to actually find my shot. That'll be in two more weeks. Everybody has a different process but if you're going to hike up to a sweet spot and make shots of a fleeting moment- you're going to want to cover your bases. I hate it when I get back and I'm looking through the images on the card and I realize that I wish this was shot wider or that was shot more to the right or something, that's where really taking your time comes in. Not to mention that it's just nice to appreciate a place sitting down by yourself without looking through a camera and take the time to listen to the falls and stuff like that- so I hear ya Tony, it's crazy out there! In obvious deference to that last point here's the google maps link if you wanna go find it yourself:

View Larger Map: you can see my house from here!

In the end I got a few shots that I like- I think my favorite might have been an Iphone shot with Hipstamatic of pine needles laying in a circular depression of one of the granite buttresses of one of the bridges:

And while I considered the wide shot of the bridge itself, there were too many shooters in that position and actually the bridge just before Waterfall Bridge which is only maybe 300 feet away has a nicer feeling character I think, so that's this, or this is that, whichever you prefer:

And with that I was out- I'd planned to spend more time there like I said, but that'll be another day. Two hours up there in the end. And then on the way home I found the best shot of the day in my opinion- coming over a rise I looked out toward Somes Sound (photographers are inherently dangerous drivers), and saw a little mini island out in the fog that was screaming to me to make a long exposure of it, a few u-turns and a touch of a little trespassing and some more soaked shoes put me right in front of it on the shore where I got off 8 or 10 shots before the driving rain started back up and my battery was dead, and I was feeling pretty good about myself at that point. What's the expression?: "there's richness in scarcity"? is that it?- I don't always shoot landscapes in the fog, but when I do... (thinking of the Dos Equis commercial with the 'Greatest Man in the World'...) Whatever, you know what I mean. 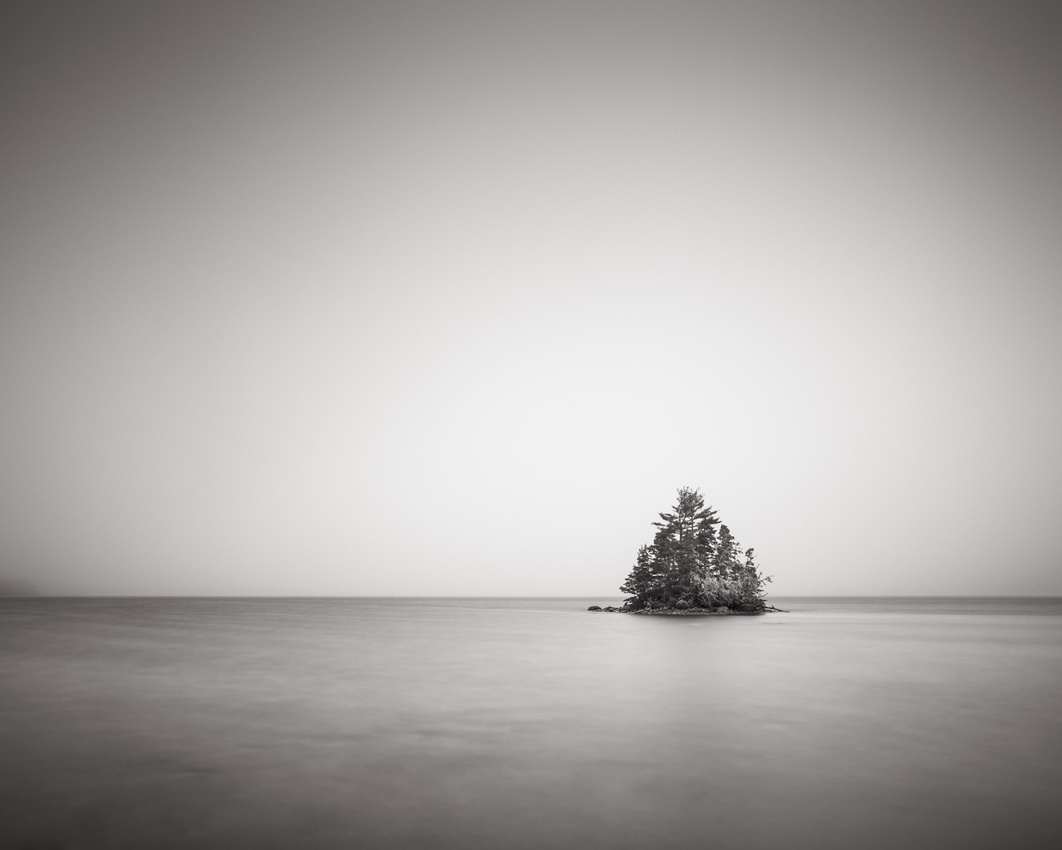 Islet in the Fog- Maine

If I could have my way there would be fog every shooting day for at least 6 hours~! You California guys got it made! Unless I'm wrong about that.

Anyways, that's it for now- thanks for stopping by and have a good one- Nate!

P.s. By the way, if anybody is interested in taking a workshop with Me, call me up! http://nateparkerphotography.com/photography-teaching

CapeCodJon(non-registered)
"Maple Spring Bridge Acadia"=EYEGASM!
Chris White(non-registered)
The "Islet in the Fog" is a definate Minimal Monday winner. Your comment about photographers being bad drivers made my laugh. I was a good example of that when I went for a drive in the country today. Good thing the traffic was light.
No comments posted.
Loading...
Subscribe
RSS
Recent Posts
Update Summer 2015 iPhone beat me at my own game- Dream Job: Photographing a Lexus ad in the deep of winter in Maine Update: got married, shooting flash, and snow on the ground. The 26 hour day- Triptychs and diptychs oh my! On maintaining creative momentum, or How I learned to stop worrying and love the process Revisiting old processes reaching for new results. Cape Cod before's and after's's's's... On Breaking the Rules= Don't Always Show Your Best Work?
Keywords
maine acadia national park photography have a nice day nate parker photography black and white acadia national park acadia bar harbor maine photography canon
Archive
January February March April May June July August September October November December
© Nate Parker Photography
Powered by ZENFOLIO User Agreement
Cancel
Continue